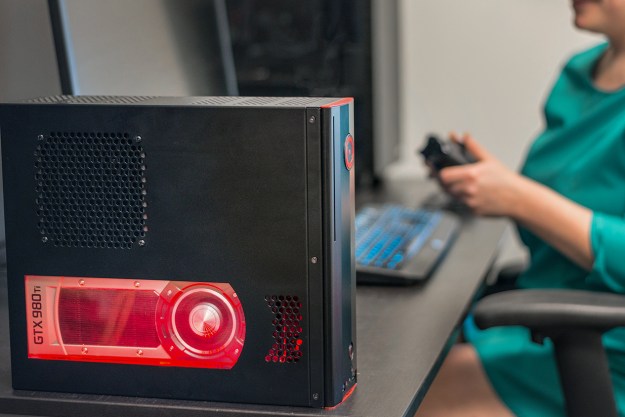 “When it comes to power, Origin's Chronos absolutely destroys every other small gaming PC.”

Origin set itself apart from its competitors in 2014 with the release of a new, unique chassis for its Genesis and Millennium tower desktops. The company’s configurable enclosure continues to give the company an edge over most of its competitors. But Origin’s line-up is broader than its mid-tower and full-tower desktops, and smaller systems like the Chronos didn’t receive the same treatment.

Until now. For 2016, Origin has introduced a new, compact case for the Chronos. It’s designed to fit the most powerful processors and graphics cards – our review unit came with a Core i7-5960X and a GTX 980 Ti – into diminutive dimensions.

A dwarf among dwarves

Origin isn’t the only company with a pint-sized gaming PC. Every PC maker offers a similar rig. But Origin has successfully out-miniaturized its competition. The Chronos is a tad less than 12 inches tall, about 14 inches deep, and just four inches wide. The Falcon Northwest Tiki is just slightly taller. Digital Storm’s Bolt is significantly larger at 18 inches tall, and 15 inches deep. There are of course smaller gaming desktops available, but the Origin Chronos is the smallest we’ve reviewed that can equip an X99 processor and GTX 980Ti video card.

The Chrono’s enclosure is designed to be “flexible,” which means it can be oriented to stand on any of its four sides without risk of overheating. That choice, along with its size, makes the system feel very much like a console. It’s hardly larger than an Xbox One, yet that flexibility means the rig looks rather generic. It’s a simple, black box, about as long as it is tall, with fan vents on all sides. That’s fine. But some alternatives, particularly Falcon Northwest’s Tiki, look more refined.

Connectivity is about what you’d expect. There are two USB 3.0 ports on the front, alongside headphone and audio jacks. Around back there’s a variety of connectivity depending on the motherboard you select. In these respects, it’s on par with the competition. Small gaming desktops generally don’t offer front-facing connectivity beyond a pair of USBs and audio jacks.

Crammed inside, but it all makes sense

Opening the Chronos’ tiny enclosure is similar to opening any traditional mid-tower case. Access is from the left side, where the entire panel slides back. You’ll have to put in a bit more work to remove it because six screws keep it in place, but once those are out of the way, access takes but a moment. The processor radiator is attached to the panel, which means takes it off completely is a chore. But there’s no reason to do that unless you want to replace the CPU itself.

The Chronos is easier to repair than most other small form factor desktops.

Inside, you’ll find a cramped, yet logical layout. The motherboard inhabits the upper rear corner, as usual. Everything in this area is easy to access, including the RAM and the M.2 solid state drive. At the front is the optical drive – yes, Origin somehow found room for one – and the power supply. Below the motherboard lurks the video card, which gets cozy with the second hard drive (if optioned), and takes up the rest of the interior space. The card is connected using a flexible PCI Express bridge, which lets Origin rotate it by 90 degrees – a necessity to make the case just four inches wide.

Working on the Chronos isn’t easy. Like all small form factor systems, it has nooks and crannies that love to eat stray screws, and accessing one component often means removing another. But all components are visible, and the overall layout isn’t much different than a standard ATX desktop. That makes it easy for PC hardware enthusiasts to understand. Overall, the Chronos matches Falcon Northwest’s Tiki in ease of repair, and exceeds most other small form factor desktops.

Upgradability, is still an issue. There’s no room in our review unit for an additional hard drive, and replacing the motherboard would be a major job due to the neat, tidy, custom internal power wiring the Chronos uses to achieve its slight dimensions. If you want a small form factor PC, but also want something easy to retrofit five years from now, you’ll need to look elsewhere.

You fit eight cores in that?

Our review unit was considerably better equipped. It arrived with a Core i7-5960X overclocked to 4.4GHz, an Nvidia GTX 980 Ti graphics card, 16GB of RAM, and a Samsung 950 Pro 512GB M.2. solid state drive, supplemented by a 5TB Western Digital Red mechanical drive. The price for all that? $4,000.

Four grand is a lot, but as you can see, it pays off. The Chronos dominates our processor benchmarks, destroying systems of similar size like the Alienware X51, and easily exceeding even the Maingear X-Cube, a much larger system. In Handbrake, the Chronos plowed through our x.265 conversion in 254 minutes, half the time of the next-closest system. That’s what an over-clocked, eight-core processor can do for you.

The hard drive runs away from the competition

In CrystalDiskMark the Samsung drive led the Chronos to destroy the competition, transfer over 2GB of data per second. Intel recently boasted about its 3D XPoint technology achieving the same, but Origin has proved you don’t need unreleased hardware to achieve such figures.

On the other hand, HD Tune – a more sustained read test – heaped less praise on the Chronos. It registered an average read speed of 1,155 megabytes per second, less than the Maingear X-Cube, which we reviewed with an Intel 750 Series PCI Express SSD. Still, sustaining more than a gigabyte per second is impressive, and the Chronos easily defeats other small form factor desktops we’ve recently tested.

The Chronos does not have room for a second video card, but it makes the most of the available space by choosing Nvidia’s GTX 980 Ti, the fastest single-GPU video card. The card leads the system to victory in the majority of our benchmark games.

1080p is not a challenge, of course. Even a GTX 950 can handle most titles at that resolution, so the GTX 980 Ti runs up the score, averaging 187 frames per second (FPS) in Battlefield 4 at ultra detail, and 64 FPS in Crysis 3 with everything turned on. 4K is more of a challenge, but the Chronos manages it well. Fallout 4 averaged 53 FPS, and Battlefield 4 averaged 59. The only game in our suite that couldn’t be enjoyed at 4K, with maximum detail, was Crysis 3. It averaged only 21 FPS.

The Maingear X-Cube managed to consistently beat the Chronos. But that system, while it claims to be a small form factor rig, is several times larger than the Chronos. That system had not one but two GTX 980 Ti cards, so of course it was quicker. On the other hand, it had a Core i7-6700K, which is why it lost to the Chronos in most CPU benchmarks.

Is that a jetliner? No, it’s the Chronos

No system we’ve reviewed has ever packed more performance into a smaller footprint, but the pursuit of size – or lack thereof – does cause a ruckus. The Chronos’ fans worked hard to keep it cool, and as a result spun up to 52.9 decibels under full system load. That’s a half-decibel less than the Chronos we reviewed last year, and two decibels less than the Maingear X-Cube we looked at last November, but much louder than a typical full tower desktop. The last Origin Millennium we tested only produced 39.6dB, for example.

The Chronos was even loud at idle. We recorded 44.1 decibels from the moment the system booted up, louder than any desktop we’ve tested over the past year. Lovers of peace and quiet will need to buy a different PC.

Origin’s standard warranty covers parts replacement for one year and shipping for 45 days, with lifetime coverage on labor and phone support. That’s on par with most other boutique PC builders, and better than most big-name brands. Our $4,000 review unit included an upgrade to a three-year parts warranty with shipping covered for the duration, a $250 value. The rig’s MSRP would be $3,750 without.

A small desktop that punches above its weight

The new Chronos successfully follows in the footsteps of its predecessors, the Millennium and Genesis. While It doesn’t offer the configurability of those much larger towers, it does pack incredible power into a rig that’s smaller than almost all of its competitors. The Chronos that we reviewed absolutely destroyed every other small form factor gaming PC that we’ve recently reviewed.

And, of course, you can always buy a less extravagant version, as the Chronos starts around $1,300.

The Bolt is easier to upgrade, but looks just as bland, and is larger. The Falcon Northwest Tiki is more refined, easier to upgrade, and quieter — traits that make it superior overall, if only just. But the Chronos should be your choice if you want to shove maximum performance into the smallest space possible.