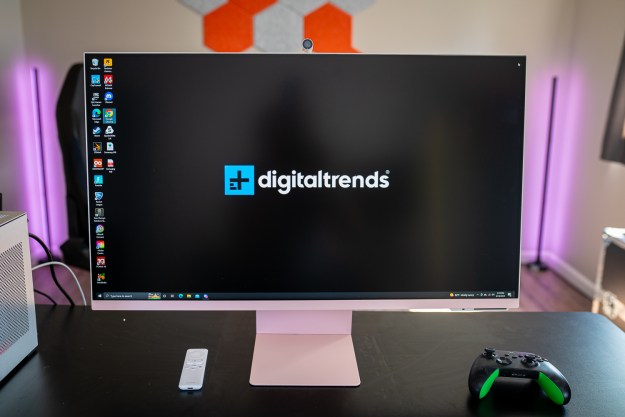 “The Samsung M8 Smart Monitor is packed with features, but they all seem to live in separate worlds.”

Samsung is on a mission. It’s a mission to redefine what makes the best monitors the best, and Samsung’s gambit is to blur the lines between TVs and monitors. That’s what the Samsung M8 is. It’s not solely a monitor or a TV — it’s both.

It’s rife with features bolstered by Samsung’s TV operating system, including Samsung SmartThings, AirPlay, and a magnetic webcam. It looks like the complete package, but in most cases, the M8 makes you choose between if you want a monitor or a TV without a lot of wiggle room to blur the line between them.

A splash of Samsung color

Samsung has made an excellent-looking monitor with the M8. It gives off heavy M1 iMac vibes, with a screen that’s less than half-an-inch thick and superthin bezels. The biggest similarity comes in colors, with Samsung offering Warm White, as well as the muted Spring Green, Sunset Pink, and Daylight Blue options (the last three come with a $30 upcharge). I tested Sunset Pink, and the contrast between the soft pink and textured white backing looks fantastic.

You get a height-adjustable stand that matches the color of the monitor in the box, but it only has 130mm of height adjustment, without swivel adjustments, and a negligible 15 degrees of tilt. That’s usually not a big deal, but the M8 doesn’t have any VESA mounting holes. You can’t use it with a monitor arm without picking up a 3D-printed adapter on Etsy.

Around the back of the monitor, you get a mini HDMI connection, DisplayPort over USB-C, and a USB-C port with 65 watts of power delivery. We’re seeing 90W hubs now, but you’ll still be able to hook up something like the MacBook Air M2 to the Samsung M8 with a single cable.

TV or monitor? You decide

The M8 is a TV and a monitor, but switching between those modes isn’t as easy as it could be. You’re getting the Tizen operating system that’s available on Samsung TVs like the S95B OLED, so you can use all of your media apps like Netflix, YouTube, Apple TV+ — the list goes on. And due to the fact that the M8 has a remote and its own Wi-Fi connection, you can use all of these apps free of a PC.

That’s great, but the more exciting aspects of the M8 lie elsewhere in software. It includes Samsung Gaming Hub, which allows you to use cloud gaming services like Xbox Game Pass, Google Stadia, and Nvidia GeForce Now. Like the normal apps, you can use all of these separately from a PC, hooking up a keyboard and mouse or a controller via the monitor’s Bluetooth 4.2 connection.

DeX works, but remoting into a computer or using a Microsoft app is like trying to run Windows apps on a smart TV processor; in short, it’s not good. All of the media and productivity apps are a big selling point of the M8, but I’d take using the apps on a PC any day. The bundled apps are just a bonus.

This isn’t a TV and a monitor. It’s one or the other. Although you use Samsung Multi-View to see a built-in app and your computer at the same time, it’s not the best experience. Multi-View is laggy, and it’s a hassle to transfer control between windows. Multi-View works, but I wasn’t inclined to use it on the M8 like I was on Samsung’s Odyssey Ark. Still, the M8 supports proper picture-in-picture if you don’t mind your cursor lagging a bit behind.

Taking control of the M8

The TV/monitor duality of the M8 struggles when it comes to changing settings. You can control the monitor with the included remote, a four-way joystick on the back, or Bluetooth peripherals. Samsung leaned into the TV side of the display, though, so you don’t have a typical OSD or fine control over picture settings like the Acer Predator X28 offers.

You can still adjust the picture, with settings for brightness, contrast, sharpness, etc. My main issue is how long it takes to access these settings. You have to navigate to the home screen, go down to settings, tab over to picture settings, and finally adjust what you need. A dedicated settings button would go a long way here, as it takes a good 30 seconds to even find the setting you want to tweak.

A great picture, but not for HDR

The M8 looks fantastic, given you’re not dead set on HDR. It’s better than budget-bin monitors but still a decent bit below the quality of premium 4K displays like the Dell UltraSharp 32 4K. A big reason why is color coverage. You get 100% of the sRGB spectrum based on my test results, as you would expect from a $700 monitor, but 83% of AdobeRGB and 89% of DCI-P3.

Those are great results, but they’re just short of providing a true wide gamut for impressive HDR. HDR on the M8 just doesn’t do much, similar to cheaper DisplayHDR 400 monitors like the HP Omen 27c. You have solid contrast with the VA panel the M8 uses (2,860:1 based on my testing), but the display never managed to crack the 400 nits ceiling Samsung advertises. I topped out at 396 nits with HDR on.

The screen doesn’t get bright enough to support HDR, and it doesn’t have a local dimming feature (much less Full Array Local Dimming like the Sony InZone M9 offers).

HDR aside, the screen is solid. The darkest parts of the monitor never washed out while I watched YouTube videos and played some Destiny 2, suggesting a global dimming feature. Although the screen can wash out a bit at low brightness, the backlight is still strong enough to combat heavily lit rooms. I had no issues with glare even with direct sunlight pouring into the windows in my office and with the backlight cranked up.

Color accuracy isn’t a concern, with the M8 hitting a Delta-E (difference from real color) of just over 1. That’s suitable for video or photo editing, but a calibrated display like the Asus ProArt PA329CV offers a wider color range for around the same price.

Gaming on the Samsung M8

Gaming isn’t great on the M8, though. The obvious hurdle is that the monitor is locked to 60Hz, so you can’t take advantage of a high refresh rate like most gaming monitors offer. Playing in 4K at 60 frames per second (fps) is still demanding for even the best graphics cards, though. I played Destiny 2 and bit of the recently released Rollerdrome on a PC, and I didn’t have any issues. While 60Hz isn’t ideal, it works for gaming on a 4K monitor.

Given how many ways you can use the M8, it’s disappointing that it doesn’t have a more robust port selection.

The real limitation comes in the port selection. You have the choice between mini HDMI and USB-C, which vastly limits the possibilities for gaming. You’ll need a USB-C connection on your GPU if you’re using a PC, and HDMI 2.0 if you’re using a current-gen console. Given how many ways you can use the M8, it’s disappointing that it doesn’t have a more robust port selection to hook up several devices and toggle between them.

I also tried out Gaming Hub with Xbox Game Pass for a bit, giving Outriders another go after abandoning it. The low-resolution stream doesn’t look great when blown up on a 32-inch, 4K display, but the real issue is the Bluetooth connection. You’re locked to Bluetooth 4.2, which feels laggy when combined with the latency cloud gaming already imposes.

Outside of all of the bundled apps, the other killer feature of the M8 is its magnetic webcam. You get one in the box, which attaches directly to the back of the monitor through a USB-C pogo connection. It’s completely magnetic, too, so you can throw it on the back of the display out of sight, as well as store the included metal privacy shield.

It has features like face tracking and auto-framing, but they only work with Google Duo. In fact, the included webcam only works with Google Duo if you’re connecting directly to the monitor. Video calls without a computer is a plus, but you need to unhook the webcam from the display and plug it into your PC if you want to use Microsoft Teams, Discord, or any other video chat app. And you can’t use the face tracking or auto-framing in that case.

The quality is great in a well-lit room, though it tends to get grainy when you turn some lights off. That doesn’t make a huge difference — an external webcam is still the best for quality — but the usability hurdles sting. A built-in webcam like the Dell P2418HZm offers makes so much more sense so you don’t have to change up your connections to let Windows take control of the webcam.

The Samsung M8 will be the exact monitor that a small group of people want. If you want one screen that can pull double duty as a monitor and a TV, there’s nothing else quite like what Samsung is offering.

Most people are in the market for a TV or monitor, though. In that case, the M8 is either too expensive or slightly lacking in quality, as the extra smart TV features make up about $100 of its price tag.

There are a few alternatives to the Samsung M8:

Assuming Samsung will continue updating its TV operating system, you can use the Samsung M8 for several years without issues.

Yes, but only if you need the various features the M8 offers. Solely as a monitor, there are better options for less. The M7 is a great alternative, too, assuming you don’t need the webcam and can pick up a monitor arm.

Topics
Samsung Galaxy Book 3 Ultra vs. MacBook Pro 16-inch
The first RTX 4080 laptops are much cheaper than we expected
Best HP laptop deals: HP Envy, HP Spectre x360, and more
Best Chromebook deals: Get a new laptop from $114
The best PC power supply for 2023
ChatGPT has a new way to detect its own plagiarism
The Galaxy Book 3 Ultra is Samsung’s most powerful laptop ever
Nvidia may have another monster GPU in the works, and the price could be outrageous
AMD’s Ryzen 9 7950X3D pricing keeps the pressure on Intel
What is ChatGPT Plus? Everything we know about the premium tier
ChatGPT Plus to bring priority access during peak times — at a hefty price
Usually $3,879, this Lenovo laptop is down to $1,479 today
Get this Asus gaming laptop with an RTX 3060 while it’s $400 off