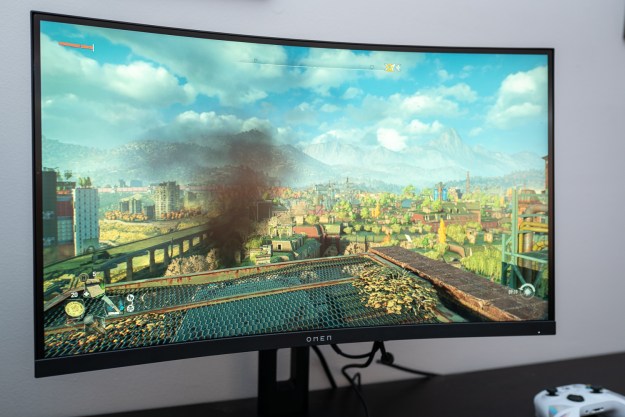 “The HP Omen 27c is a great gaming monitor, despite some trade-offs with HDR and visual artifacts.”

The release of the Xbox Series X and PlayStation 5 has spawned an influx of gaming monitors that claim to do it all. A super-high refresh rate? Check. Adaptive refresh rate? We got it. True HDR gaming? Yup.

The HP Omen 27c is one of these displays that claims to do it all, thanks in part to its 240Hz refresh rate and 1440p resolution. It flexes the strength of the Omen brand with some unique design choices that I’m a big fan of and is even primed for the latest gaming consoles, if you don’t mind skipping 4K.

But against the best gaming monitors, claims only go so far. And it’s in the margins of image quality where the Omen 27c struggles against the competition, despite being a solid gaming display for the price.

After unboxing the HP Omen 27c, I was immediately struck by how heavy it is. It’s not heavier than any similar monitor you could find — the Samsung Odyssey G7 weighs about half a pound more, in fact — but the Omen 27c still feels beefy. That’s due in large part to the stand.

It’s weighty and dense, and even with a single point on contact, refuses to budge. Instead of two legs, HP uses a small diamond base that sits directly under the monitor. It goes a long way toward reducing the footprint of the Omen 27c on your desk, and it makes the stands you find on monitors like the LG 27GN950 feel downright massive by comparison.

The stand goes a long way toward reducing the footprint of the Omen 27c.

There’s a headphone rest on the back of the stand, too, which is a tidy addition. But that’s where the praise for the stand ends.

The stand offers 130mm of height adjustment and a few degrees of tilt, but no swivel adjustment. You can still get around the lackluster ergonomics with a 100mm x 100mm VESA mount, but the mount is rotated at a 45-degree angle.

Instead of a flat bed of ports underneath the monitor, HP stretched them out across a diamond on the back of the display. They’re split across two edges of the diamond, and they are frustrating to get at. You have to tilt the whole monitor — stand included — to see the ports. Some swivel adjustments would’ve helped here. I also had to tug at my DisplayPort cable to get it wrapped around the diamond.

The 1000R curvature is immediately notable. All you need to do is glance at the monitor to see its usefulness. The aggressive curve makes the screen feel smaller in all the right ways, crimping details on the peripheral for a smaller footprint and more immersive experience.

There’s some good and bad here, but there’s plenty to like about the Omen 27c’s design. It’s one of precious few monitors with a 1000R curvature, and the stand, although occasionally clunky, frees up a lot of desk space.

The HP Omen 27c has a solid selection of ports — a single DisplayPort 1.4 connection, one HDMI 2.0, two USB 3.0, 3.5mm headphone, and a sole USB-C. The USB-C connection is a welcome addition, but it’s for data only. You can hook up a USB-C hub, but you can’t use the port for power or as an input.

There’s no HDMI 2.1 here, but that doesn’t matter with the 1440p resolution. I would’ve liked another HDMI port, but it’s not a big deal. The main issue is plugging in the cables, with the split layout pushing them off in unfamiliar directions.

For controls, HP went cheap. There’s a four-way button on the back that opens up the menu, and it features the standard assortment of options you’d find on most monitors — multiple color modes, adaptive refresh, brightness, etc. Everything comes at a high level, though. There aren’t controls for color temperature, and there isn’t a way to lock the display to sRGB.

Nothing is bad, but it could be better. I much prefer how the Samsung Odyssey G7 handles its on-screen display. Not only is the button centered for easier access, it also allows you to cycle through image adjustment settings apart from a chunky on-screen menu. With the Omen 27c, it’s a guess and check situation.

There’s nothing too surprising about the Omen 27c. Out of the box with SDR set, it gets bright enough to satisfy, and due to it using a VA panel, it offers slightly better contrast than the typical IPS panels you find on gaming monitors. HP has a list of specs, but I threw those out and immediately hooked up my DataColor SpyderX calibration tool to check the display’s performance.

HP says the monitor covers 92% of the DCI-P3 color space, though I only measured 71% coverage. But sRGB coverage was much better at 97%, which is great for gaming and even a lot of content-creation workloads. This isn’t a wide gamut monitor, even though the listed DCI-P3 coverage suggests that it is.

The other tests check out, and I won’t bore you with the specifics. Peak brightness landed at an impressive 450 nits, above even above HP’s own rating. I won’t argue with extra brightness, but it falls flat when the HDR implementation isn’t up to snuff. There are also some uniformity differences around the edges, which is typical of edge-lit displays.

The only strange result I saw was in contrast. With the standard picture profile, I measured a contrast ratio of 2,670:1, which is quite a bit below the 3,000:1 ratio HP advertises. You can achieve that contrast ratio, but it’s not common.

You could edit photos or videos on the Omen 27c.

What stood out was the color performance. Based on other testing I’ve seen, my Omen 27c seemed to come with a better panel than most. The SpyderX brought an average Delta-E value of 1.33 before calibration. That’s great considering a Delta-E value of less than 2 is what most people aim for when editing photos or videos. Post-calibration, the Omen 27c tightened up even more with a Delta-E or 1.07.

You could edit photos or videos on the Omen 27c thanks to its color accuracy, but it’s a gaming monitor first. Something like the Samsung Odyssey G7 will fit the bill for light photo editing better thanks to its higher coverage of the Adobe RGB color space.

The main issue is HDR. The Omen 27c has DisplayHDR 400 certification, which is to say that it doesn’t have HDR. Technically it does, with a peak brightness of 450 nits to satisfy VESA’s requirements, but this tier of HDR doesn’t usually impress. And with the Omen 27c, it actually looks worse.

It comes with a local dimming feature with eight edge-lit zones, and it’s turned on automatically whenever you turn on HDR. Worse, you can’t turn it off. Unsurprisingly, the dimming zones are slow to respond to changes, and with only eight of them, you’ll notice large differences in brightness while playing games. Bloom was a constant issue, and it’s distracting at best.

Although the Omen 27c isn’t great for video or photo editing, it still has excellent contrast, brightness, and color accuracy. The HDR is bad with the monitor’s local dimming, but all monitors with DisplayHDR 400 certification fall into the same traps as the Omen 27c.

The Omen 27c is a great gaming monitor. The curve goes a long way to help with immersion, and the monitor includes a handful of useful features like a frame rate counter and adaptive refresh rate. The standout feature, of course, is the 240Hz refresh rate, but it’s not as impressive as you might imagine.

That’s not to say the extra smoothness hurts. In games I actually play, like Destiny 2 and Marvel’s Guardians of the Galaxy, the higher refresh rate would occasionally poke through for extra smoothness. All you need for most games is 144Hz, but I won’t argue with 240Hz.

The only issue I encountered while gaming was black smearing.

To keep everything in sync, the Omen 27c comes with AMD FreeSync Premium Pro over DisplayPort and HDMI (though, the HDMI 2.0 port is capped at 144Hz). This tier typically indicates higher HDR performance, but the Omen 27c just barely earns the certification. Still, the adaptive refresh works, and it’s enabled by default.

I also tried to brute force Nvidia G-Sync, which also worked. You’re getting the same thing either way, but if you have an Nvidia graphics card and must use G-Sync, that’s an option.

The only issue I encountered while gaming was black smearing, which is typical of VA panels. HP says the Omen 27c has a moving picture response time (MPRT) of 1ms, which is much more impressive than the 1ms gray-to-gray response time you typically see. The problem is that a MPRT of 1ms is only possible with the highest overdrive level.

Overdriving a VA display will always introduce black smearing at some point, and that’s true of the Omen 27c. Fast-moving objects, particularly against dark backgrounds, smear as the pixels struggle to refresh in time. I would recommend turning down the overdrive, even if the makes the response time a little higher.

The Omen 27c is a solid gaming monitor at a reasonable price. There are small trade-offs across the board, from occasional black smearing to less-than-ideal color coverage. But for gamers who want good resolution and high refresh rate without overspending, the Omen 27c is a winning ticket.

With 1440p gaming monitors with a 240Hz refresh rate becoming increasingly popular, there are a few great alternatives to the Omen 27c:

Most LCD monitors last a decade or more before the backlight burns out, and the Omen 27c should be no different. Although we may see 1440p displays with a 360Hz refresh rate soon, 240Hz should still be fine for many years.

If you’re on a strict budget and don’t need HDR, you should buy the Omen 27c. The slightly more expensive Samsung Odyssey G7 is better for most people, though, and it can handle HDR.