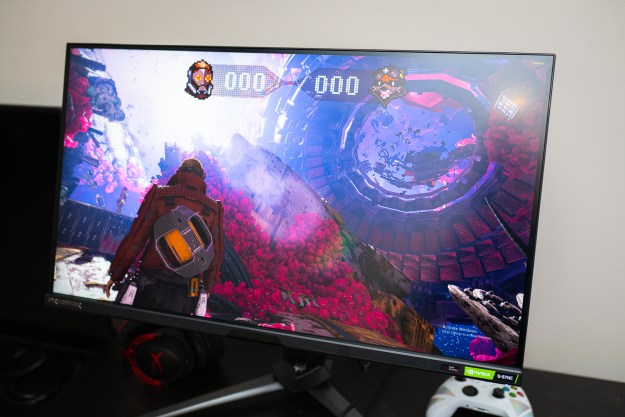 “The Acer Predator X28 is packed with features and comes with excellent color out of the box, but focused gamers can save a bit with FreeSync alternatives.”

The Acer Predator X28 is one of the more elusive monitors in 2022. Announced last year and silently launched at the beginning of 2022, it comes with a suite of gaming features — G-Sync, a 152Hz refresh rate, and Nvidia Reflex built in.

At the time of publication, it’s only available at Micro Center, and several locations don’t have any in stock. The worst thing about the Predator X28 is that it’s not as accessible as multiple FreeSync alternatives that you can find at any retailer.

If you’re lucky enough to find one, though, you’re in for a treat.

You can tell the Predator X28 is different, even before opening the box. It comes in a remarkably compact case, with everything slotting together in harmony inside. I rarely give much thought to the unboxing experience of the monitor, but it’s worth pointing out with the Predator X28.

Part of that is the stand. It comes in two parts, and it’s entirely tool-less. The base connects to the stand with a captive thumbscrew, and the whole thing hooks into the back of the display before locking in place. It’s a great stand, and getting it set up was much easier than the HP Omen 27c.

There’s no RGB on this design, and I’m a fan of it. It’s undeniably a gaming monitor, with Predator logo badges on the base and back of the stand. But this could sit in a more professional setting without standing out. It seems Acer is billing this is a both a monitor for gaming and professional work, and I love the balance the Predator X28 strikes between the two.

The stand takes up a decent amount of desk space thanks to its floating design. The back leg sticks out, so you can’t press the monitor up against the wall with a shallow desk.

What the stand affords is excellent ergonomic adjustments, with a high degree of tilt, swivel, pivot, and height adjustments available. You can rotate it to portrait mode, and the height and tilt adjustments offer enough room to poke your head under the monitor to see the ports. If you don’t want to mess with the stand, the VESA mount allows you to use a monitor arm.

Outside of the stand, the Predator X28 includes some unique features. There’s a color and light sensor on the front, which does a handful of useful things. It can adjust brightness and color temperature based on ambient light, as well as detect when you leave to enter power-saving mode. You can turn off these features individually, too, which I’m a big fan of.

The Predator X28 has the perfect set of ports and controls, even going beyond the excellent LG 27GN950. You have access to four USB ports, split across three USB 3.0 and one USB 2.0. They’re not stuffed on the back on the monitor, either. I loved having two of the USB 3.0 on the left side for easy access.

For hooking the monitor up, you can choose one of the HDMI 2.0b ports or the single DisplayPort 1.4 connection. HDMI 2.1 isn’t here, but the 2.0b standard still unofficially supports 4K at 120Hz for the Xbox Series X and PlayStation 5. And with two ports available, you could hook up both.

I tested it out with a few HDMI cables and hit 4K at 120Hz every time. A word of caution, though: 4K at 120Hz isn’t technically part of the HDMI 2.0b spec, so a display with HDMI 2.1 ports like the Gigabyte M32U might be better if you plan on primarily using a console.

You mainly interact with the OSD through the four-way button you find on almost every monitor. It’s a little easier to find than normal, tucked around the right side below a set of four additional buttons. The extra buttons are great, not only for quickly finding the main control stick, but also to navigate the menu.

I like the menu, though I imagine most won’t. It’s tiny and a little hard to read, and the settings are all exposed. You don’t set the brightness of the monitor. You set the “peak white” level, and it’s not a percentage — it’s measured in nits.

I much prefer this approach since it exposes settings that are normally wrapped up in easy-to-understand sliders. And it’s accurate; if you set the peak white at 350 nits, you’ll get a peak brightness of 350 nits. Still, I can imagine a situation where a buyer jumps into the OSD without any clear direction.

The eight included profiles can help those buyers along. The three game profiles are decent, and you’re free to overwrite them with your own settings. They’re also quickly accessible through the OSD, with one of the four static buttons dedicated to them. Although a little too techy for some, I appreciate the flexibility the OSD offers on the Predator X28.

Time for brass tacks. The Predator X28 comes factory calibrated, including a report that shows the display achieving a Delta E (difference from real color) value of less than 2. That’s the mark for photo and video editing, but I still hung my SpyderX over the top to measure the color accuracy myself.

And I was shocked. Out of the box, I measured a Delta E value of 1.1, which is excellent. After calibrating, the average Delta E shrunk to only 0.96. Assuming Acer keeps this up with other shipping units, you could very reasonably do color work on the Predator X28 out of the box.

It technically comes with HDR, verified by the VESA DisplayHDR 400 certification. It just doesn’t look like HDR. The Predator X28 lacks local dimming, instead using a global dimming backlight like the Eve Spectrum 4K (you can turn off the dynamic backlight in the settings). With HDR on, you’re getting a slightly more vibrant image, but nothing you should worry about.

An IPS display like the Predator X28 needs some extra work to get HDR working. The Predator X28 looks great and gets bright enough on its own, so don’t chase this display for HDR performance. You’ll be disappointed.

Everything checks out for the Predator X28, but beyond the specs, it just looks fantastic. The Zeroframe design, as Acer calls it, pushes out the bezels and makes the usable screen area feel much larger. The 28-inch form factor is great, too, offering up a hair of extra screen real estate like the Samsung Odyssey G7.

The Predator X28 is built to game. A 1ms gray-to-gray response time, 152Hz refresh rate, and official G-Sync support make this a cornucopia of gaming-focused display tech. It looks and plays great, and I loved using it for raiding in Destiny 2 to hanging out on the Milano in Guardians of the Galaxy.

4K is crazy demanding, so you’ll rarely saturate the 152Hz refresh rate in the latest AAA games (I’m looking at you, Dying Light 2). Still, a 100Hz+ refresh rate is always welcome, and it’s what separates gaming monitors from everything else.

This is a true G-Sync monitor.

You need to overclock the monitor to hit 152Hz — out of the box, it runs at the familiar 144Hz. The difference between the two isn’t noticeable while playing, not even a little bit. However, 152Hz technically shaves half a millisecond off of frame delay, so that’s something.

The Predator X28 joins an increasingly small list of G-Sync monitors. Keep in mind this is a true G-Sync monitor with a dedicated processor inside, not just a G-Sync Compatible display. Thankfully, that doesn’t limit you to an Nvidia graphics card in 2022. If you want, you can use FreeSync with an AMD GPU, too.

There isn’t a big reason to spend the extra money on G-Sync monitors these days, but the Predator X28 sweetens the pot. You also get an Nvidia Reflex latency analyzer built into the display. Latency plays a huge role in competitive games, and the Reflex module allows you to narrow down where your lag is so you can eliminate it.

Reflex also brings an esports mode. This picture mode adjusts a bunch of settings — turning off the dynamic backlight, boosting black levels, and decreasing contrast among them. It doesn’t look great, but it improves latency, and it still looks good enough to take out in Counter-Strike: Global Offensive or Valorant.

I’ve looked far and wide for the Predator X28, and I’ve only found it at Micro Center. The list price should be $1,000, but Micro Center has it listed at $850. That’s a competitive price, especially considering Acer debuted the monitor with a suggested price of $1,300.

It’s competitive with true G-Sync monitors, which reach into the $2,000 to $3,000 range with similar specs. The problem is that most monitors go with FreeSync in 2022, and they’re almost always cheaper. The 4K Samsung Odyssey G7 is $150 cheaper, and it comes with HDMI 2.1 ports.

There are cheaper options that do the same thing that the Predator X28 does.

There are several other options, too, including the Asus TUF VG28UQL1A and aforementioned LG 27GN950. Both of these monitors list for $800 (though, the LG monitor sells for closer to $900 due to high demand). All three of these displays support FreeSync, and they’re G-Sync Compatible.

The Reflex module inside the Predator X28 isn’t worth the extra $50 to $150 on its own. If you’re purely focused on gaming, there are cheaper options that do the same thing that the Predator X28 does. The good news is that the premium isn’t entirely on the shoulders of G-Sync, with some value attributed to factory pre-calibration and Reflex.

The worst thing about the Predator X28 is how elusive it is. There’s little coverage on the display, and only a brick-and-mortar U.S. retailer has units in stock. It’s still a monitor worth seeking out. The color performance is astounding, the design is classy and clean, and the price, although slightly more expensive than FreeSync alternatives, is way below what other G-Sync monitors are selling for.

Yes, most of which come with FreeSync instead of G-Sync:

Backlights can last for a decade or more, and 4K will still be a demanding resolution several years down the road.

Yes, especially if you want to edit videos or photos in addition to gaming. If you’re focused primarily on gaming, a FreeSync alternative could save you between $50 and $150.

This RTX 3070 gaming laptop deal for $1,000 officially wins Cyber Monday
The best Black Friday laptop deals for 2022
LG finally did it: a 27-inch OLED gaming monitor with a 240Hz refresh rate
The best VR headsets
Best gaming laptop deals: Save on Alienware, Razer and more
Best Buy is having a 1-day sale on the Microsoft Surface Laptop 5
Apple’s VR headset may launch soon, intriguing leak suggests
The most innovative monitors of 2022
The most innovative tech products of 2022
Why I refuse to buy The Callisto Protocol on PC, even with an RTX 4090
Nvidia and AMD GPU prices could skyrocket again in 2023. Here’s why
How to safely overclock your Intel or AMD CPU
ChatGPT: how to use this viral, often hilarious AI chatbot