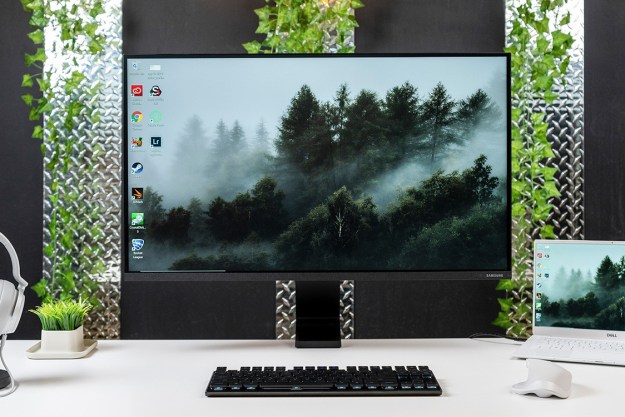 “The Samsung Space Monitor uses its unique dual-hinge arm to save your desk from clutter.”

Monitors keep getting larger, yet the space on your desk keeps shrinking. Mounting a monitor to a wall might help, but for most people, that’s not practical. Wall space is often as limited as desk space, and not everyone wants to make an ugly bracket a permanent part of their office décor.

The Samsung Space Monitor is an alternative solution with a unique hinge that frees space without complicating your desk. We reviewed the 32-inch 4K model, which has a price tag of $500.

Has your desk’s savior arrived?

Creating room for your clutter

Samsung’s Space Monitor is unlike any monitor I’ve seen before. The striking sight of a monitor standing straight up, defying gravity, certainly caught my eye. Yet I remained skeptical. Monitors that try to reinvent themselves are usually more complicated than convenient.

Surprisingly, the Space Monitor solves the problem it set out to address. It stands straight up and mimics the feeling of mounting your monitor up on the wall, but has the versatility of its own adjustment options.

It’s ingenious. With two hinges built into the arm and a clamp, the monitor can rest comfortably in numerous positions. It can stand straight up, which frees up maximum space, or pull the display out from the wall, so that feels like a normal monitor with a traditional stand. Adjustment between these positions is simple, so you can pick whatever suites the task at hand.

The Space Monitor solves the problem it set out to address.

That’s not all. The flexible stand can tilt the screen back to a nearly 90 degree angle, where it looks and feels a bit like a Surface Studio 2 resting flat. This isn’t a touchscreen device, however, so the use of this feature is more limited than it could be.

Compared to standard height, tilt, and swivel adjustments, the Space Monitor is far more versatile. However, you can’t easily reposition this monitor on your desk. It’s fixed where you clamp it down. It also doesn’t swivel or rotate, which limits its utility.  There’s no VESA mount, either, so you must accept the out-of-box experience.

You might think the unique hinge would mean this is a high-end, expensive monitor. Instead, Samsung has chosen to sell the Space Monitor at a mid-range $500 price point. That’s not cheap, but it’s reasonable for a 32-inch 4K screen.

That means other aspects of the design are less premium than you might think. It’s made entirely of plastic, and though the stand feels sturdy, the screen does a wobble a bit. That could be a problem if you frequently bump your desk.

The back of the cabinet itself isn’t all that thin, and the design has a bland, ridged texture. There are far sleeker options out there, such as the Dell 27 USB-C Ultrathin. Samsung paid more attention to the function of the hinge than the look of the chassis.

Cable management is critical for a clean desk, and the Samsung Space Monitor has an interesting solution. Samsung was able to tuck a Y-cable into the stand, which is completely hidden behind a removable panel that can lay flat against a wall. This cable hides the monitor’s connection to your PC from sight. However, while this is a cool feature, it’s not as easy as plugging in to down-firing ports seen in many monitors.

While the location of the ports is convenient, the actual variety is limited. The monitor comes with just one HDMI, a mini-DisplayPort, and a single USB-A port. That’s not much, and it probably means you’ll need dongles and a USB hub at the ready. Some modern monitors include options like USB-C for a single-cable setup. It’s a shame that’s not available here, because it would fit with the monitor’s clean and minimalist theme.

The Space Monitor’s menu control is very simple. It’s a single joystick, found on the backside of the bottom right corner. You’ll need to click it even if you want to power the monitor down.

The menu itself pixelated and looks old-school. It’ll make you feel like you’re back in the 90s, but it gets the job done. You have access to your typical Brightness, Contrast, and Sharpness controls, as well as a few Color Tone presets. You can, however, manually tinker with your Red, Green, and Blue, as well as three Gamma modes. It’s nothing out of the ordinary, and we found the default settings preferable in most cases.

There are two options available for the Space Monitor. A smaller, 27-inch, 1080p and a 32-inch 4K option (3,840 x 2,140). Both have the same unique hinge, but they vary in sharpness and image quality. Our review unit, the 4K model, picked up some impressive readings from our colorimeter, especially for a 4K monitor this cheap.

The strength of the monitor’s image quality is the color gamut and contrast. With a contrast ratio over 1,000:1 and a color gamut spanning 87 percent of the AdobeRGB color space, the Space Monitor is a step above other bottom-rung 4K monitors out there.

The Space Monitor isn’t the brightest screen we’ve ever seen, maxing out at 321 nits. However, the matte finish means that harsh glares aren’t an issue, even in brightly-lit office environments. The color accuracy, though, was a bit off with an average color error of 2.53. Compared to more accurate monitors like the BenQ PD3200U or the Dell 27 USB-C Ultrathin, the Space Monitor isn’t as pixel-perfect.

Step away from the center of the screen and you’ll notice a quick lapse in contrast.

Interestingly, the Space Monitor uses a VA (vertical alignment) panel as opposed to an IPS or TN display type. The result is better contrast and wider color gamut than traditional IPS display. The trade-off? Viewing angles. They aren’t quite as bad a TN panel, but once you move away from the center of the screen a bit, you’ll notice a quick lapse in contrast.

The Space Monitor is not at a gaming monitor. VA panels tends to have the slowest response time, and the panel is locked at a 60Hz refresh rate. Most notably, it doesn’t have support for adaptive sync technology, so FreeSync is a no-go. The smaller, 27-inch Space Monitor does have a 2,560 x 1,440 panel with a 144Hz refresh rate.

We calibrated the Space Monitor, but it didn’t make much of a difference. The most noticeable change was a slight increase in contrast ratio, which brought a bit more depth to some of the darks of the image. Color accuracy remained virtually unchanged.

The Samsung Space Monitor lives and dies on its unique hinge. It’s built for a very specific purpose, and it isn’t a monitor we’d recommend to just anyone. The space-saving abilities of the stand are still interesting, though, and most of us could use some help on that front.

Unlike most experimental products, Samsung didn’t add unnecessary costs to compensate for the innovative design. It’s an affordable, 4K monitor that delivers adequate image quality — even aside from the flashy hinge.

There’s nothing quite like the Space Monitor, though a 4K monitor mounted on an arm stand might do the trick. The Samsung UJ590 has a conventional stand but uses a similar 32-inch VA panel for $100 cheaper.

The Samsung Space Monitor should last you more than five years. It’s sturdy and well-built, and even without a USB-C port, you shouldn’t need to purchase another one anytime soon.

The monitor comes with is a one-year limited warranty for parts and labor. We like to see longer warranties on monitors, but one year has become the standard.

Not unless you’re the type of person that desires a clean desk above all.