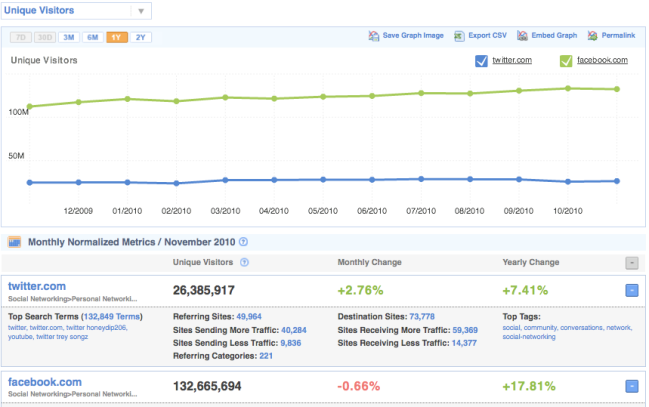 A Pew study recently released news that only 8 percent of Americans use Twitter, and new data is suggesting that the site’s US user growth is slowing. A recent comScore report shows that Twitter drew over a million fewer unique visitors than it did last month.

While its US presence might be stalling, Twitter is still globally growing. This year, Twitter added 46 million accounts worldwide (take note, only around six million of those new users were in the US). And the site experienced a considerable amount of success in Japan, easily besting Facebook’s numbers.

While it seems like Americans might be slightly losing interest in the Tweet, the reformatted layout has been a success. US pageviews significantly increased since the new UI was introduced this fall.

What might surprise some are the companies that Twitter is on par with when it comes to user numbers. The site can’t touch Facebook or even MySpace, and it’s more along the lines of Yelp and LinkedIn. And while Twitter has incredibly devoted users, some are musing that it could be facing some challenges in the near future. Business Insider recently identified what it thinks will be the major issues for Twitter, including the fact that few registered users become daily users, and its struggles with implementing advertising. Now that the aforementioned sites offer status updates in addition to their other features, Twitter could find itself having to fend off more competition for the 140-character post.

Is it possible the Twitter has peaked? Probably not quite yet; the site still has a solid international fan base and a bidding war that recently pushed its value to $4 billion. Twitter likely has some tools in its arsenal to combat its lack of US growth. Question is, what are those tools and how will they change the site?

Topics
The best password managers for 2023
This ChatGPT scam duped thousands of people into downloading fake app
What is Reddit?
How to send a text message from your email account
Intel targets RTX 3060 takedown with Arc Alchemist price cut
Perfect for school, this 14-inch laptop is discounted to $150 today
One of the best HP laptops you can buy is $250 off right now
Samsung’s 49-inch Odyssey G9 gaming monitor is $600 off today
GPU prices and availability (February 2023): how much are GPUs today?
The best PC power supply for 2023
ChatGPT has a new way to detect its own plagiarism
Samsung Galaxy Book 3 Ultra vs. MacBook Pro 16-inch
The Galaxy Book 3 Ultra is Samsung’s most powerful laptop ever