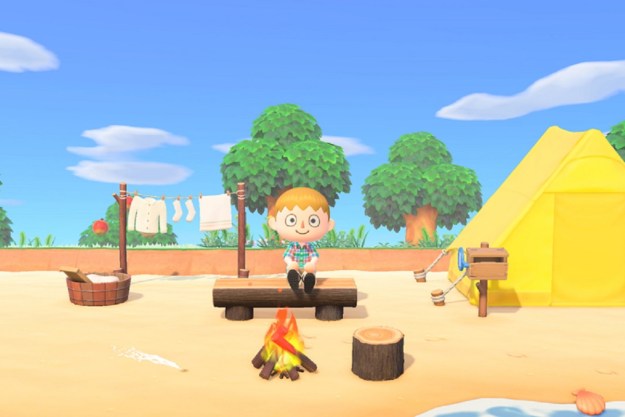 Animal Crossing: New Horizons might be the perfect game for this moment in history.

The slightly campy, always cute life simulator is back with its first game in nearly eight years, and while it sticks to what’s likable about the series, it also has the kind of upgrades that Tom Nook would charge a hefty sum of Bells for.

Not everyone sees the appeal of a game that includes paying off a mortgage and running errands. At times, Animal Crossing: New Horizons stretches the definition of what a game even is. Still, it’s managed to capture the hearts of millions, as massive fan hype ever since Nintendo announced the release in 2019. Fans have also snatched up a model of the New Horizons-themed Switch, causing it to sell out worldwide.

This is the island getaway we all need right now.

Not the same ole’ Animal Crossing

Animal Crossing: New Horizons is distinctly part of the franchise, but it doesn’t repeat the formula of past games. It’s part Animal Crossing, part Cities: Skylines, and part The Sims. For the first time, players can customize all details of an island, including where bridges and ramps are located. Amiibo compatibility makes it easy to bring villager favorites to your new island. If you prefer humans over people, it’s also easy to play with friends online by visiting each others’ islands.

Despite its broad scope, the game also pays attention to detail, with plenty of small tidbits that are fun to notice. Villagers can sit on the grass and read, walk around with a sandwich, or be found hard at work crafting in their own homes. Interiors of buildings now have more aesthetic details that make the setting feel more realistic than it did in the past.

An island to call my own

Often in games, players simply have to accept what they don’t like. Awkward parts of a map or annoying NPCs are just part of the experience. Not in New Horizons.

Yes, there are initial limitations on how much space can be accessed. This is frustrating when planning where to put your home, other villagers, and important buildings like the museum. However, that can be changed later, and you don’t have to wait overly long before making significant changes.

New Horizons also adds terrain editing, unlike any past Animal Crossing games. The last entry, New Leaf, put players in charge of the town as mayors. This meant they could make small, pre-set gameplay changes and decorate the area with “public works projects,” but none of that came close to the scale of what’s included in New Horizons.

Every new Animal Crossing game comes with new items of clothing, accessories, and furniture, but there too New Horizons turns the knob up to 11. Clothing and furniture now have entire palettes, some of which can be bought, or created with crafting, to customize the look and feel of everything you own. The items look more modern, too, with ladder shelves and macrame wall hangings.

Interior decorating sees a significant revamp. Animal Crossing’s side game, Happy Home Designer, wasn’t a hit, but it did show off new ways to style homes. New Horizons builds on it, allowing players to lay flooring in multiple directions, move multiple items at once, and enter a design UI rather than making a villager physically walk around the space pushing and pulling objects to perfection. You can even place furniture items and fences outside, around homes, and on the beach.

The game’s go-to shop, The Able Sisters, packs in more items than ever. The store offers seasonal items and a daily rotation, but the changing room provides even more options and allows players to mix and match pieces. You’ll find maxi skirts and boho-inspired tunics to wear.

It’s a lot, but that’s the point. The original Animal Crossing hit in 2001, and New Leaf is now eight years old. Life simulation games have expanded over the years. The Sims 4 went deep on expansion packs that provide options for nearly every situation, Stardew Valley mixed things up with farming gameplay, and niche games like My Time in Portia offer large worlds. Animal Crossing needed to expand, and that’s exactly what New Horizons has done.

New Horizons is visually stunning. The textures of fossils, carpets, animals’ fur, and the bark on trees make the virtual island feel more immersive than any Animal Crossing game. Fish and insects in the critterpedia, which catalogs all the fish and insects caught, are displayed with exquisite detail. New Horizons captures the setting in a wholly new light.

In addition to better character models and textures, the animations receive more attention to detail than ever before. An island breeze will often sway of the leaves on trees. Bands and ponytails on villagers’ hair bounce with movement.

Also, when viewing items in a museum, talking with other villagers, or taking photos, the camera focuses on a specific area giving a flattering bokeh effect. It’s a nice touch that makes the game look modern.

Taking it easy. Too easy?

Island life means kicking back and relaxing, but it can be a little too relaxing. I found myself digging up more fossils than in previous games, and appearance changes and styles were easy to unlock. Pockets, after a few upgrades, carry a massive 40 slots. Material collecting is essential in New Horizons, but it’s still a significant upgrade.

The Miles system means there are two ways to earn currency. A rotation of items, from clothing, furniture, and recipes, can be purchased using miles. The miles themselves are easy to obtain, too. All it takes it, well, playing the game. Catch fish, talk to villagers, hunt for insects, it all counts. Life simulation games aren’t known for challenges, but New Horizons provides absolutely zero friction.

Then again, Animal Crossing was never challenging in the past. Relaxing, trouble-free gameplay is the focus of the series. Just make sure you know that going in. This isn’t a game you win. There are no credits, no final boss battle. It’s just life, day after day, in a fun world full of talking animals.

New Horizons is packed with delight. It’s fun, with rare cross-generation appeal. The deserted island theme had some worried the latest entry would stray from the traditional model, but those fears should quickly be alleviated. It does, however, allow for new experiences and prevent the series from feeling stale almost 20 years after its debut.

How long do you want it to last? New Horizons’ real-time progression means this venture is a long one, at least if you’re not willing to cheat. As the days pass, your island slowly develops. Instant gratification is missing, as the game makes you wait at least a day to enjoy the benefits of a new building.

Even if you get bored of your current run, there’s plenty of replayability value. Many fans have made themed towns in previous entries or found new focuses when restarting.

New Horizons, like its predecessors, lets you choose your own endgame. That could mean building your perfect house, living as an urban planner carefully crafting your island, or achieving a completionist’s dream by collecting all catalog items or filling out the museum.

Yes. While Animal Crossing games are undoubtedly divisive in how “fun” they are, if you’re at all on the fence, you should absolutely pick up this game. Its one-of-a-kind playstyle, updated and expanded features, and ability to cater to fans of different elements, there’s a reason the franchise is so beloved.

Especially as countries cope with the coronavirus, officially named COVID-19, by social distancing and staying home, this is precisely the type of game that’s perfect for anyone looking to get away without leaving the house.

Topics
CES 2023: Project Leonardo is PlayStation’s new accessibility-focused controller
New art for The Last of Us multiplayer spinoff teases its seaside setting
PS5 tips and tricks: how to get the most out of your new Playstation
Xbox Series X tips and tricks: how to set up your new console
How to change classes in Fire Emblem Engage
Fortnite: How to collect Dragon Balls on Adventure Island
How to get all Emblems in Fire Emblem Engage
Fire Emblem Engage bond levels: how to get max Bond Levels fast
Marvel Snap Battle Mode: How to play Marvel Snap with friends
Best Gaming PC Deals: Save on RTX 3070, 3080, 3090 PCs
The best video game remakes reinvent the classics, they don’t just revisit them
Best Buy will give you a $10 to pre-order Hogwarts Legacy today
Save $620 on this Lenovo gaming laptop with an RTX 3070