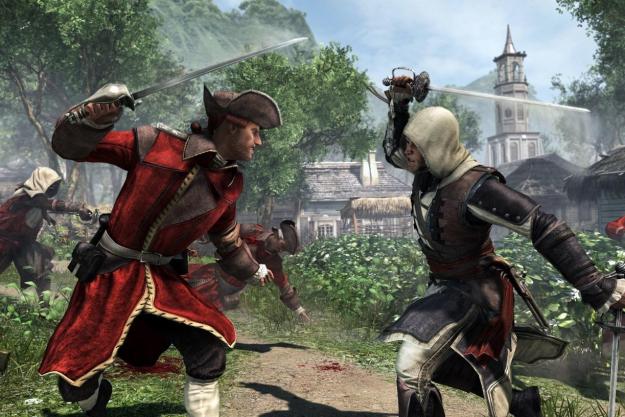 “A new world, protagonist, and setting help elevate a formula that is otherwise growing stale.”

Swashbuckling, burying treasure, and pillaging villages weren’t exactly the daily routine for pirates in the early 18th century. Their lives were a mixture of fiery moments of adrenaline-fueled excitement, buffered by long stretches dominated by repetitive tasks like hoisting sails, swabbing decks, and cooking. In that, Ubisoft has captured the pirate lifestyle admirably with Assassin’s Creed IV: Black Flag.

For the sixth major Assassin’s Creed release, Ubisoft Montreal takes the reins and introduces a new protagonist, a new setting, and even a new type of world to explore. But even these new elements don’t distance it far from its predecessors, for better and worse.

What will you do with a stabby sailor?

The Kenway surname is now a familiar one to Assassin’s Creed fans. In Assassin’s Creed III, players took control of both Haytham and Connor Kenway, the son and grandson, respectively, of Black Flag’s protagonist Edward. Unlike his descendants though, Edward is not driven by an ideology, nor is he seeking revenge. Instead, he is a pirate in the truest sense, loyal only to himself.

Edward is a difficult character to like at first, and the early gameplay does him no favors.

Edward operates in the Caribbean during the early 1700s, a period commonly referred to as the “golden age of piracy.” When the game begins, Edward has no connection to either the Assassins or Templars. Along with a few other real-life pirates like Blackbeard and Charles Vane, he helps form a de facto republic in the Bahamas, an ideal utopia (at least in their minds) where the men briefly toy with creating a new way of life … before it all comes crashing down.

Edward becomes intertwined with both factions of the AC universe – the Assassins and Templars – as they seek a mysterious location known as the Observatory. This quest ties into the modern-day story, where you now play an unseen first-person character, hired by Abstergo – a Templar front that masquerades as an entertainment company – to help test a new total immersion video game starring Edward. Part of your job is to play through Edward’s life in order to help them learn more about the Observatory. You soon discover that there is more going on than the making of a mere game.

Story has always been central to Assassin’s Creed, with characters that mature as the game progresses. The first Assassin you play, Altair, learned humility and leadership; His successor Ezio went from a foolish boy to a master assassin; Last year’s protagonist Connor overcame his anger and became the person others needed him to be. Edward, too, grows as a person, and we see his conscience develop over the course of several years.

He learns that his actions have consequences, and early on he witnesses the disastrous culmination of a shortsighted decision he made. And it is far from the only one. The payoff is worth the journey, but Edward is a difficult character to like at first, and the early gameplay does him no favors.

Black Flag requires a hefty amount of patience. It could take anywhere from 30 to 50 hours to finish, or more, depending on how much time you spend chasing down optional objectives. Until the larger story begins to unfold though, the early hours are often tedious, and filled with inconsistencies.

For instance, Edward is not a trained Assassin or Templar when the game begins, yet he inexplicably has all the abilities others have had, including Connor’s ability to parkour run through vegetation as well as man-made structures – an ability introduced just last year. the mechanism is actually slightly improved, so Edward is better than Connor, technically. There are even moments when Edward kills an animal for crafting purposes (more on that in a bit), and the animation shows him using a hidden blade he doesn’t have. You’re also be able to accept Assassination Contracts, for no logical reason, which is reinforced later when an assassin eventually introduces them. They’re all in service of the gameplay though, which makes them easy to overlook.

The game doesn’t really pick up until you have all the tools you need to engage in piracy.

Once you earn your own ship, the Jackdaw, 5 or so hours in, you have access to the massive world of Black Flag. Scale is hard to convey, since much of the environment is ocean. In sheer digital mileage though, Black Flag raises the bar for what an open world game can be.

There are three major cities to explore – Kingston, Havana, and Nassau – and dozens of smaller islands and villages. None of the cities are the size of Boston or New York from the last game, but the three new cities together are only slightly smaller than the two American cities combined. The open sea, however, is significantly larger than the frontier from the previous game. It takes more than 30 minutes to sail from one side to the other.

There are countless mini-games and side missions you can engage in – from checkers to treasure hunting to tackling the odd courier you can rob. But the game doesn’t really pick up until you have all the tools you need to engage in piracy; that doesn’t come until you are several hours in, anywhere from 8 to 20 hours depending on how you play. Constantly finding new things like “Legendary Vessels,” incredibly powerful ships with massive treasure stores hidden in the fog, keeps the game enjoyably unpredictable, but to fight one of those ships you will either need to dedicate yourself fully to upgrading at the cost of everything else, or wait a long, long time.

The naval side of the game is the big change to the series this year. The Caribbean is littered with ships, from merchant-class schooners filled with plunder, to naval warships fighting both pirates and other nations. Identifying and attacking the right targets is vital to earning both cash and the materials needed to upgrade the Jackdaw, allowing it to take on even bigger, potentially richer targets.

The mechanics are much the same as they were when they were introduce in AC3 as a mini-game. You have multiple speed options, and an assortment of weapons at your disposal – including front and side cannons and fire barrels you drop behind you like mines. It’s a fairly simple setup, but everything is upgradeable, from how armored your hull is to more powerful cannons to aesthetics like the color of your sails. The more powerful you become and the better the prizes you can take and the battles are – again though, expect a lengthy wait.

Once you earn your own ship, the Jackdaw, you have access to the entire world of Black Flag, and it is massive.

Once you lock in on a target, you wear them down with weapons fire and brace for counterattacks. When they catch fire, you can sink them and take half their supplies, or move in to board them. This starts its own mini-game where you need to kill a specific number of enemies (and occasionally complete secondary objective like killing scouts or taking the enemy flag).

At first all you can do with a captured ship is to use it to repair your own or lower your wanted level and shake off the hunters you will inevitably call down on you. You can later send the ship to “Kenway’s Fleet,” an online mini-game where you are presented with a reward/risk mission for your fleet to run. It is similar to the brotherhood in previous games, as well as the trade in AC3. Once you start the missions the results are automatic.

Black Flag also introduces a new crafting system similar to Ubisoft Montreal’s previous game, Far Cry 3. Throughout the world are animals you can hunt, which you can then use to craft new items like larger ammo pouches and better armor.

And on and on

If this all sounds familiar, it should. The naval focus is a fresh new twist, and new tools – like a diving bell for retrieving sunken treasure and a harpoon for hunting – become addictive. Like everything else in the game though, repetition becomes a problem, and the lack of payoff makes you wonder why you bother. Diving is a neat twist, but there is very little variety to the missions. Exploration is a big part, but after spending hours discovering islands where you find a chest with only a few dollars, it takes some of the thrill away.

Take Assassination Contracts. In AC3 there were only a handful, but they were frequently varied and made you approach them differently. In Black Flag you can almost always find your target, run straight at them and stab them, then run away. It is not deep, and part of that is due to the AI, which is unchanged since the first Assassin’s Creed. If Edward were a real person and there was a biography on him, it could be named Whistle and Stab, since you can beat most missions by hiding in a bush and whistling until the guard wonders over, then stab them. Some AI will often watch their companions disappear and continue talking to them as if nothing happened. It kills any tension.

The formula has become stale, but the story missions remain a highlight. These occasionally fall into familiar patterns as well, but there are a few that still manage to show that the series has a lot to offer. Sending fire ships into a blockade and taking out guards silently to avoid them killing a hostage keeps things fresh. Eavesdropping and tailing guards a dozen times, however does not.

The multiplayer mode returns as well, and for many it will be a highlight of the game. It retains the same core focus on stealth and evasion, and returns to the cat-and-mouse battles as well as the cooperative Wolfpack mode. It is one of the most unique multiplayer styles available today, and remains so in Black Flag. The real highlight though is the Gamelab, a new feature that allows players to create and upload their own match types, down to the smallest detail.

Along with the standard game mode options, you can change things like map size and how long it takes to aim weapons. You can ban certain abilities and preload others; change the cooldown to make it a constant ability; set bonuses to score a particular thing more than another. It is essentially the same tool devs use to create new games, just streamlined to make it more user friendly.

There is also a welcome tutorial section that is expanded from previous versions, which should be welcome news for players new to the series. The focus of the game remains on the single-player campaign, but the multiplayer retains what made it work before, and the Gamelab is brimming with potential.

Assassin’s Creed IV: Black Flag offers a new take on the genre of piracy, with an original character whose story is refreshingly complex. Ubisoft Montreal managed to squeeze a staggering amount of content into this game. Even if there is little you haven’t seen before, the formula still has some life in it. The series definitely needs some new tricks, but Black Flag has enough to keep it going for another year at least.

For some tips on getting started, checkout out our Black Flag guide.

This game was reviewed on a PlayStation 3 debug console using a copy provided by Ubisoft.