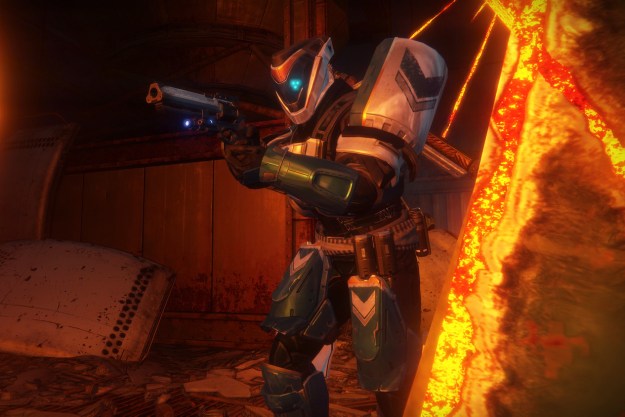 “‘Rise of Iron’ is just an expansion, but it makes Destiny feel new again.”

It’s been two years since Activision and Bungie began their grand experiment with an open-world, multiplayer sci-fi shooter, and Destiny is still going strong. The fourth expansion to the Destiny in two years, Rise of Iron updates nearly every facet of the Destiny environment with a new story campaign, social space, level cap, raid, and PvP modes and maps. And, like all expansions, it also adds an impressive amount of new gear to the mix, too.

While previous expansions shifted focus between the raids, competitive multiplayer, or other activities as the primary way to increase your character’s level and collect the best gear, Rise of Iron has taken steps to re-balance the Destiny playing field. Players who prefer to run solo can now reach the same level limits as players who focus primarily on the cooperative raids or the competitive multiplayer activities, and that makes Destiny feel like a significant bigger game — the biggest it’s ever been, in fact.

Author’s Note: This review does not currently account for Rise of Iron’s post-release raid mission, “Wrath of the Machine.” The review will be updated at a later time to reflect our impressions of that content.

The story campaign for Rise of Iron has your in-game character investigating a mysterious threat known only to Lord Saladin, whom characters might recognize as steward of Destiny’s semi-regular “Iron Banner” PvP tournaments. This threat takes the form of a sentient techno-virus dubbed “SIVA” that one of Destiny’s enemy factions, an alien race known as The Fallen, has unearthed in Russia, and has begun using to strengthen their own forces. Over the course of the campaign, you’ll learn more about the Iron Lords – a group previously mentioned in Destiny lore — as well as Saladin, the group’s only remaining member.

The story campaigns of Destiny’s expansions have always been relatively brief experiences, essentially serving as playable introductions to the real meat of the added content: the endgame activities. Rise of Iron doesn’t buck that trend, and offers up one of the shortest story campaigns in the series so far. What it lacks in length, however, it makes up for in sheer entertainment.

As far as storytelling and gameplay experiences go, the campaign in Rise of Iron ranks slightly below previous expansion The Taken King — the high point of Destiny story campaigns so far  — but well above the underwhelming campaigns in the first two expansions, The Dark Below and House of Wolves, which felt tacked-on as an afterthought. The narrative feels more fleshed-out and the characters more developed than in those early expansions, but the time required to get from that first hint of a problem to the final (or seemingly final) solution doesn’t quite allow for developing the level of threat the story wants you to feel along the way. To its credit, however, the campaign delivers something resembling a payoff in the end with one of the most memorable final encounters of any of the expansion campaigns so far.

Still, Rise of Iron does arrive with a few major, frustrating issues with some of the new content. “Archon’s Forge,” a new co-operative, wave-based challenge similar to The Taken King’s “Court of Oryx” missions, feels obtuse. While the event itself is easy enough to understand — players team up to battle several waves of enemies before tackling a major boss — but the game seems to go out of its way to make the game difficult to find and play.

What it lacks in length, it makes up in sheer entertainment.

Similar to the way “Court of Oryx” encounters work, activities in the “Archon’s Forge” area of the world are triggered when players submit “SIVA Offerings” — inventory items that drop randomly from enemy encounters — in the appropriate terminal. Here’s the kicker: It’s only possible to carry one or two offerings at a time, and the offerings you are able to collect disappear once you use them, regardless of whether you complete the event.

Furthermore, players who don’t have offerings but want to participate in the event either need to be inside the “Archon’s Forge” arena when the offering is made or use a different item — a “Splicer Key” — to join the event. Players who die during the event respawn outside of the arena, and must use another key to rejoin the battle.

All these rules make the Archon’s Forge event fairly restrictive, and more frustrating than either the Court of Oryx or the random public events that pop up while exploring the world. Hiding an event that’s been promoted as one of the primary elements of the expansion behind random drops feels punishing to players – particularly when it’s an event that’s intended to be run over and over.

The much-anticipated return of the rocket launcher Gjallarhorn is also a mixed bag in Rise of Iron. Having a dedicated questline to earn it is a welcome change from the random loot drops of the game’s early days, but the missions are peppered with annoying bugs that can stall your progress. The final stage of the Gjallarhorn quest makes up for any early issues, however, and the quest itself feels like just the right amount of challenge for such a valuable reward.

Eye on the prize

As for the rest of the rewards that arrived in Rise of Iron, the most prominent additions to the loot table include a set of new artifacts — one of the many types of armor a character can wear — that feature some interesting passive effects. While none of the effects are obvious game-changers, effects that let you turn an enemy character into an ally for a brief period or remove the cool down on sprinting add a fun, fresh element to the gameplay that goes beyond the usual updates.

More generally, Rise of Iron benefits immensely from the recently revised reward system in Destiny, which determines the level of loot dropped after major encounters according to your character’s level. Pieces of gear dropped by bosses now stand a good chance of actually being useful to your character, which makes the game’s level progression feel a lot more satisfying in this expansion than in any of the previous updates. This, paired with Bungie’s decision to update the reward tables in some older content  — the “Challenge of the Elders” event released back in April, for example, now drops gear at the maximum level – has breathed new life into the rest of Destiny, making the world feel more cohesive than it’s ever felt.

The expansion also gives the cosmetic side of players’ characters a much-needed overhaul, making characters’ color-changing “shaders” affect the entire set of armor (in most cases) instead of only working with some pieces of gear and not others. It might not seem like a big deal to most of the game’s audience, but it’s a nice nod to the portion of the Destiny community that cares about their characters’ visual aesthetic.

Rise of Iron also expands the options for “The Crucible,” Destiny’s competitive multiplayer mode. Call of Duty players will likely find a lot familiar in the new “Supremacy” mode for the Crucible — the game’s competitive PvP environment. The new mode isn’t all that different from the “Kill Confirmed” mode in Call of Duty, tasking players on opposing teams with not only killing each other, but also picking up the “crest” each victim drops. Players get points for collecting the crests, not the kills, so the mode adds an interesting element to the Destiny PvP experience.

Supremacy arrives at an interesting time for the Destiny PvP community. Close-range shotguns have become the go-to weapon for high-level competitive play, and this new mode encourages exactly that sort of up-close confrontation (so you can pick up the crests immediately after the kill). Players who are accustomed to a more run-and-gun style of PvP will likely get off to a strong start in the new mode, while long-range snipers might have a more difficult time adapting to the new mode.

Destiny has come a long way over the last two years, and this expansion shows it. What began with a wide-open world that relied on random rewards and repetition of the same, limited number of activities has become a well-rounded experience that gives players a wide array of options for growth.

With Rise of Iron, developer Bungie has succeeded by doing more than just stacking new, exciting stuff into the game. It makes the entire game better. Where earlier expansions felt like isolated modules attached alongside the existing Destiny experience, Rise of Iron does an impressive job of weaving all of the aforementioned new content into the existing environment and making the entire Destiny experience feel broader, not just one corner of it.