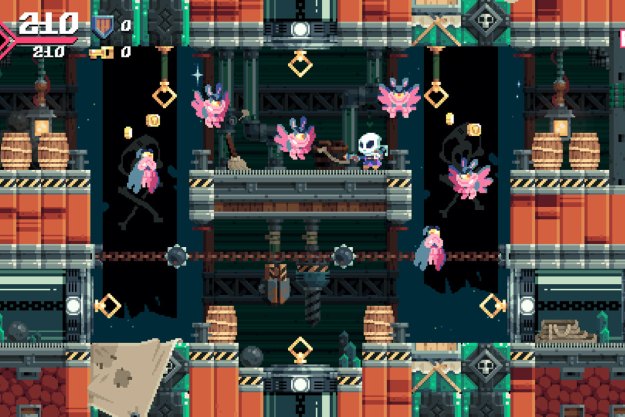 Retro-styled platformers are a dime a dozen these days. Nostalgia-driven jump-fests like Super Meat Boy, Braid, Shovel Knight, and countless others, have honed and reimagined nearly every facet of the genre, leaving a very high bar for newcomers to impress us. Montreal-based Tribute Games did just that when we tried out their Flinthook at E3 last year, and spending a few weeks with it has only confirmed that this is the real deal.

If you come at the king, you best not miss

Flinthook is a procedurally-generated “rogue-lite” 2D action-platformer in the vein of Spelunky and Rogue Legacy. As the eponymous Captain Flinthook, you are a space pirate, busting through hulls to scour ships laid out like original Zelda dungeons for loot before absconding away while they explode in the background. All the spaceships you knock over are also owned by pirates, which makes you something of an Omar Little figure, doling out vigilante justice to a galaxy in chaos.

The tools at your disposal are a blaster pistol, a grappling hook (or “quickhook”), a belt that temporarily slows time, and a variety of single-use secondary weapons like bombs or freezing effects. The pistol and quickhook can be aimed in a 360-degree arc, either in motion or while planted. Where many games might dole these tools out over several levels with corresponding challenges, Flinthook gives you (almost) all the basic tools by the end of the tutorial.

Using those abilities in concert is a demanding, swashbuckling ballet that would be maddening if the controls weren’t so immaculately tuned. Designer Dominique Ferland tweeted a survey in November 2015 about the control scheme for a “Spiderman with a gun” game that turned out to be Flinthook. Tribute clearly put refining the game’s control scheme as a top priority from early in the design, and it shows with how intuitive the result is.

Imagine a game in which Spiderman has a gun. What buttons/keys/sticks would you assign to each of Spidey’s actions? pic.twitter.com/fZEkOoopTE

Intuitive doesn’t mean easy, however. Despite claims to the contrary in development, we found Flinthook to be quite hard. Even after over 30 hours, we still haven’t defeated all its bosses. Zipping around rooms, dodging hazards, and blasting enemies in 360-degrees can be thrilling when you hit that flow state, but it also demands an overwhelming amount of hand-eye coordination. The time-slowing Chronobelt can help mitigate that, but it’s also another button that you have to think about. Tribute has made full and thoughtful use of the modern gamepad, but accordingly demand a degree of manual dexterity that might frustrate casual players.

Any frustration from an untimely demise is amplified by the permanent death of the game’s “rogue-lite” structure. Taking inspiration from Spelunky and Rogue Legacy, all the levels are procedurally-generated from prefabricated parts, and you only have one life for each run. In regular play, you select a bounty on one of the game’s bosses, then run through a requisite number of ships (choosing from three at a time) before being given their location. Defeating each boss unlocks the next of five total for future games, each effectively serving as a “world,” with different skins and music for the levels, and successively tougher challenges.

Its demanding, swashbuckling ballet would be maddening if the controls weren’t so immaculately tuned.

Like Rogue Legacy, Flinthook adds a meta-progression, with experience and unlocks to increase your power slightly between individual runs. The bonuses are much more understated than those of Rogue Legacy, however, often doing things like increasing your health or critical chance a bit, and only a finite number of perks can be selected at a time. Muting the inter-game progression hews closer to the spirit of roguelikes than Rogue Legacy does, but brings out its own problems.

Roguelikes compensate for their punishing difficulty and permanent death by offering memorable highs. These are system-rich games full of variety, with the idea being that each play should be unique because of both the challenges you face and the items/powers that you acquire, which can feel overpowered in the right combinations, or provide fundamentally different ways to play. We remember the crazy games, and forget the dozens of mediocre ones leading up to them. This is true in classics like Rogue or NetHack, or modern action-roguelikes such as The Binding of Isaac or Nuclear Throne. Such games are imbalanced by design.

It’s an odd criticism to make, but Flinthook is perhaps too balanced. Rarely do any of the bonuses you acquire in or between games feel especially impactful. While there is a little variety of the secondary weapons, the tools you use to face any given challenge are generally the same as the ones you learned in the tutorial, and runs don’t feel terribly distinctive apart from the bounty you’ve targeted. A lot of the variety you unlock over numerous playthroughs is purely flavorful, with lore entries and relics that don’t impact gameplay.

Another classic feature of roguelikes is interesting trade-offs, such as vampirism, which heals you for killing enemies but at the cost of being able to use healing items. These sorts of interesting decisions challenge you to alter your strategies and approach the game from new angles. Flinthook gestures toward this idea with optional curses, which give debuffs to things like healing item efficacy in exchange for more experience. More experience doesn’t have any impact within that run, however, nor terribly much outside. That reduces the appeal of the option.

As an action-platformer, Flinthook is tightly balanced and buttery-smooth. Adopting a roguelike structure squeezes a lot more gameplay out of the development effort, but doing so piecemeal results in a design that, like Rogue Legacy, can feel slightly at odds with itself.

Tribute Games proudly wears its nostalgia-driven design philosophy on its name, and Flinthook is the retro masterclass you would hope to see from a studio whose mission is to “use modern game development processes and technology to design new original titles that are deeply rooted in the 20th century.”

It’s an odd criticism to make, but Flinthook is perhaps too balanced.

Character saturates every pixel in Flinthook’s richly detailed world. It feels like a real labor of love with charming detail in every character, animation, and environment. A catchy, 16-bit soundtrack rounds out the game’s fantastic presentation.

Of course, the game is minimally demanding of whatever system you play on. We reviewed it on a non-gaming work laptop and it ran great, with a local install just north of 200 megabytes. As the upper limit of graphical power pushes ever higher, this kind of accessibility is welcome and often undervalued.

Nostalgia-driven design can be a minefield, with rosy memories often clouding critical thinking and design judgement. Fortunately, Flinthook falls squarely into the same camp as Shovel Knight, or the more recent Thimbleweed Park, recreating your memories of playing older games, rather than the actual experience, warts and all. It’s a subtle distinction that can make the difference between playing a game that feels like it came out of a time capsule, versus one that acknowledges a few subsequent decades of inherited design knowledge.

While we found Flinthook to be occasionally frustrating to review, we did find it enjoyable, thanks mostly to its fluid control. Its lovingly retro veneer belies a tight and modern design that might be too demanding for casual platformers, but will no doubt hit the spot for genre fans. The rogue-lite structure allowed Tribute’s small team to make a larger game than they might have otherwise, but it fails to capture the deep, systemic variety that makes roguelikes tick. It’s nevertheless a charming, fun, and well-crafted game.

Spelunky, The Binding of Isaac, Rogue Legacy, and Nuclear Throne are all excellent action rogue-lite games with distinctive mechanics and themes that are worth investigating as well, depending on your taste and platform availability. Shovel Knight and Super Meat Boy have fixed levels, but are also great retro-styled platformers.

We’ve played over 30 hours and have not come close to seeing everything the game has to offer, so you can expect to enjoy it for quite a while.

Yes. Flinthook isn’t the best retro rouge-lite around, but it’s a blast to play and will challenge even veteran platformer fans.