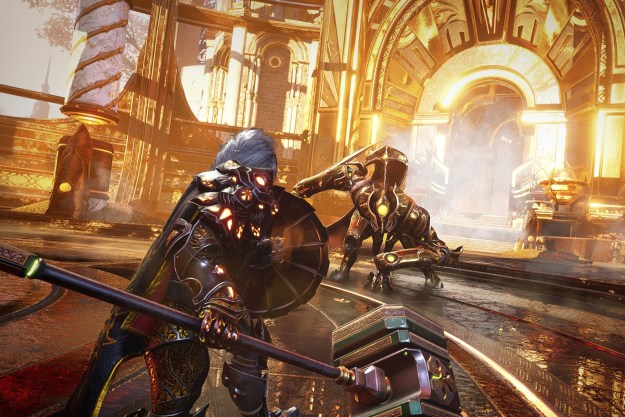 “Godfall's dazzling visuals and promising combat are held back by repetitive dungeon crawling.”

If there’s one thing Godfall gets right, it’s spectacle. The PlayStation 5 launch title is filled with the kind of visual razzle-dazzle that one might expect from a next-gen game. There’s a whole menu of hyperfocused graphics options meant to push the new hardware to its limits.

Early buzz around new consoles tends to center around power, putting day one games like Godfall in the spotlight when they might otherwise fly under the radar entirely. Go back to any console launch and it’s easy to find a long-forgotten launch day title that maximized power, but failed to make too much of a lasting impression otherwise.

Godfall takes advantage of the next-gen power jump with its dazzling visuals, but misplaces its promising combat system in a repetitive loot game where rewards rarely feel rewarding.

When Godfall was first announced, it drew immediate comparisons to Destiny 2. Part of that was due to the game’s marketing push, which branded the game as the first “looter-slasher” and focused on flashy armor that wouldn’t be out of place in Bungie’s space epic.

Perhaps the most surprising revelation about Godfall is that it’s not a live service game at all. Instead, it’s more akin to a dungeon crawler like Diablo. The bulk of the game is spent popping into missions from the game’s small hub. Players slash down crowds of enemies, collect new loot, and discover resources hidden throughout the world.

It’s a rinse-repeat experience that asks players to complete a limited number of tasks (most of which involve hacking up enemies), while running circles around the same areas over and over. For instance, players will frequently need to survive a wave of enemies for 60 seconds or kill 16 enemies, who slowly emerge from statues. Big boss fights break up the tedium, but they’re only unlocked by gaining seals obtained by grinding through more missions like this.

Like any dungeon crawler, loot is the real hook. Missions are filled with rewards, from weapons to gear that each come with their own perk. The constant stream of goodies makes it so players can start customizing a build quickly. After a few missions, however, I became thoroughly overwhelmed by the amount of treasure I was collecting. Even salvaging it for resources felt like a monotonous time commitment.

It’s a rinse-repeat experience that asks players to complete a limited number of tasks, while running circles around the same areas over and over.

Exciting loot is only half the battle for a game like this. There’s a constant power accumulation through the game, but few compelling reasons to show it off outside of a few high-level postgame activities. Godfall offers a lot to play with, but not much to actually play.

The weak gameplay loop is a shame, because combat offers some genuine potential. Like many modern action games, fighting revolves around light and heavy attacks. The key difference is that players use oversized weapons like hammers and spears. There’s genuine weight to each weapon, making each hit feel slower and more impactful than a standard sword swing. The trade-off is that players need to think more strategically about every hit, as committing too much can lead to disaster. Each button press matters, which is rare in a hack-and-slash game.

There’s a heavy defensive component as well, with a shield that plays a major role in combat. This can be used to block attacks, parry enemies, or for ranged attacks. Like primary weapons, the tool feels devastating and adds a genuine sense of power to combat. There’s a lot of satisfaction that comes with tossing the hunk of metal like Captain America’s shield, knocking an enemy off his feet, and opening it up for a brutal takedown.

Each button press matters, which is rare in a hack-and-slash game.

That strong foundation evolves even further throughout the game thanks to a smattering of upgrade systems. There’s a skill tree that adds more combos and color to the experience and gear enhancements that grant specific perks. On top of that, the game features 12 unlockable “valorplates,” which are different armor sets that players can equip. Each one comes with its own special perk, like shock damage or poison, adding tons of ways to craft character builds.

Everything is successful up to a point. I found myself using just about every single tool in battle, spending a lot of time enchanting gear, and switching up my valorplate every chance I got. But I was still loading into missions that felt indistinguishable from eachother and mowing down the same types of enemies ad nauseum. I was all dressed up with nothing to do.

All strategy and nuance tends to go out the window as enemies become more plentiful and bosses’ health bars get bigger. It only gets more and more tempting to just equip a quicker weapon class and spam light attacks to push the advantage. The weighty combat could likely provide thrills in a focused action game with big-budget set pieces, but it’s a mismatch for a modest dungeon crawler built on grinding.

The game’s design decisions feel like they’re taking a back seat to its technical prowess. It’s a visual spectacle that feels like the video game equivalent of a Great Gatsby party. Valorplates are lavishly detailed, particles fly in every direction, and golden light shines down on every surface to drive home the wow factor.

It’s immediately impressive, even if on a shallow level. As someone who’s not easily impressed by visual flair, I still found myself marveling at tiny details like smooth motion blurring as if I were a seasoned techie.

That surface sheen never really goes away, but the excitement is short-lived due to the game’s lackluster world design. Godfall primarily features three maps, each with its own elemental flavor. Despite thematic differences and motifs, the areas are structurally similar enough that they rarely feel like radically different environments. That doesn’t negate the impressive eye candy, but it does make its tricks feel limited at times.

The underlying design decisions undercut the spectacle, bringing the game down from next-gen cloud nine.

Console launch games are always going to be in a tight spot as they tend to be the most heavily scrutinized games of a generation, at least on a technical level. Godfall does everything in its power to make a splash, but it’s a short-term solution. The underlying design decisions undercut the spectacle, bringing the game down from next-gen cloud nine. Once the paint fades away, players are left with a surprisingly light looter that doesn’t feel much more complex than Minecraft Dungeons.

Godfall offers a lot of promise with its impressive visuals and impactful combat, but those highlights are lost in a sparse dungeon crawler that sells its strengths short. It’s far different than the Destiny 2 clone fans were anticipating, but that live service style may have been a better fit for its commitment to loot grinding.

Warframe is more effective as a “looter-slasher” and Destiny 2 offers the same next-gen grind with greater reward.

The main campaign gets up to the 8- to 10-hour range, but dedicated players can spend more time grinding for rewards and completing a small handful of postgame activities.

No. There’s plenty of better next-gen games to try right now, even if you’re just looking for a multiplayer game to try at launch.

Topics
The best capture cards for 2023: Xbox, PlayStation, and PC
The best PSVR games for 2023
The Elder Scrolls Online’s 2023 updates bring players back to Morrowind
The best Fire Emblem games, ranked from best to worst
GTA 5 cheat codes and secrets for PS4, PS5, Xbox, and PC
WWE 2K23: release date, editions, pre-order, and more
Despite divisive dialogue, Forspoken gets a lot right about open-world games
The best RPGs for the Nintendo Switch
How to link your Fire Emblem Engage and Fire Emblem Heroes account
Xbox and Bethesda’s Developer_Direct: how to watch and what to expect
Goldeneye 007 comes to Game Pass and Nintendo Switch later this week
The best iPhone games in 2023: 31 games you need to play right now
I can’t believe I’m recommending Forspoken on PS5 over PC