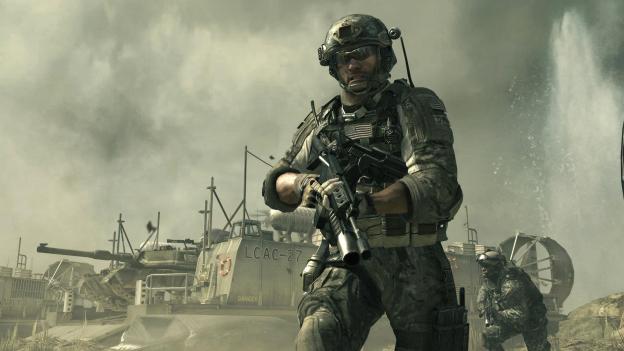 Getting actors on board the most successful video game franchise today wasn’t very difficult for developers Infinity Ward and Sledgehammer Games. In the case of Greenwood, all they had to do was ask him to play Overlord.

“I was only familiar with video games in the most peripheral way because I don’t play them and they just didn’t penetrate my world,” said Greenwood. “I didn’t realize how compelling they were. It’s like when you’re ignorant about something, you just don’t think about it that much. I used to think, ‘Oh video games, so what?’ I didn’t know jack about games and as soon as I got introduced to them, I realized, ‘No wonder it’s so intoxicating.’ Now I’m going to have to carve enough time out of my life to actually get involved in them because they’re so fun. I really need another thing in my life to suck two hours out of the day.”

Fichtner, who just wrapped the submarine movie Phantom with Call of Duty: Black Ops star and Academy Award nominee Ed Harris, has watched as more and more talented actors have migrated to games.

“Ed Harris is such a gentleman and people just love him in the games,” said Fichtner. “It dawned on me when we were shooting the film, that [it’s] not so much that it’s any slap on my own back, but it does make sense to go out and find really talented on-camera actors that know how to play a moment. They know how to figure out a story, but most of all know how to play a moment of a situation. I could be in a scene with Ed Harris and throw him a left curve and I’m going to tell you something, you’re not going to shake Ed Harris. He’s going to come back at you with something that’s absolutely 100-percent appropriate for the moment.”

Having played Sergeant First Class Jeff Sanderson in Ridley Scott’s Blackhawk Down, Fichtner, who trained with Delta Force soldiers for that film, isn’t surprised that Call of Duty is popular with the Armed Forces.

“That doesn’t surprise me because the game just feels so incredibly real,” said Fichtner. “I know that the consultants for the game are drawing from the real world and that’s what makes it so shocking to a guy like me who’s never set a foot in that world. On a set you can set up some kind of heavy battle scene that takes a couple of days or a week to shoot and you feel the bombs going off and you do it piece by piece by piece. In this game, you die and then you’re down the rabbit hole.”

Greenwood has a lot of nephews, so he understands the culture surrounding Call of Duty, especially the online game.

“Ultimately, a lot of these players become fighter pilots and sh*t like that,” said Greenwood, who is currently filming Robert Zemeckis’ Flight with Denzel Washington.

Greenwood said that while there may be some reluctance to admit it, Hollywood recognizes that videogames are big entertainment. This is especially true with the Call of Duty franchise, which has consistently topped global sales of over $1 billion over the past few years with each annual iteration.

All of this success has impacted the lives of those actors who have been along for the Modern Warfare ride since the beginning, including Billy Murray, who has been portraying Captain Price since Call of Duty 4: Modern Warfare.

“Lots of people recognize my voice right off and if they don’t, when they find I was in the games then they recognize my voice,” said Murray. “For instance, when I came over from England to do Call of Duty XP, I’d hired the cheapest car there was at LAX and this woman (at the rental car agency) asked me why I was in LA and I told her I was an actor and I was in town for a game. She asked what game and when I told her Call of Duty she went very quiet. She didn’t say a word. She just picked the phone up, dialed a number and asked me to speak to her son. The son asked if he could come over and if I’d wait. I couldn’t because of my schedule, but I said I’d meet him when I came back on my next trip. The lady looked at me and said I’d booked the cheapest car, so she upgraded me to a 4×4 for an extra $10 a day and it should have been $40 a day. So there are perks to being Captain Price.”

There are other perks, as well. One of which is immortality, playing a character that will become part of entertainment history.

“When I had the opportunity to do this game over the summertime, all I remember is when they first called and told me it’s one of the lead guys,” said Fichtner. “They had some art to show me, and I said, ‘Thanks, you make me look really good.’ I love the poster with the Sandman on it.”

Gamers will be hearing a lot from these actors starting November 8th when Activision unleashes the latest installment from Infinity Ward and Sledgehammer Games at retailers worldwide.