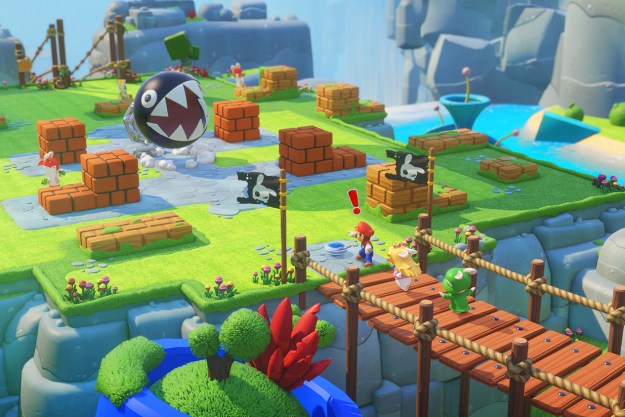 Everything about Mario + Rabbids: Kingdom Battle looks bad on paper. The Nintendo Switch exclusive, which was developed by Ubisoft in consultation with Nintendo, combines the character of the mushroom kingdom and Ubisoft’s Minions-esque Rabbids, placing them both in a turn-based strategy RPG with combat that looks similar to XCOM: Enemy Unknown. For the first time, Mario and the gang carry guns. Everything is chaos. Nothing makes sense.

Somehow, though, Mario + Rabbids is far, far more than the sum of its parts. The game pulls together its disparate influences to create a game that feels unique and fresh, not only among the limited library of the Nintendo Switch, but among all strategy games. Mario + Rabbids: Kingdom Battle is fast, breezy, and fun, yet also tactically challenging.

The premise of Kingdom Battle is simple. The Rabbids, who hop dimensions at random, teleport to an alternate version of earth and accidentally swipe the SupaMerge, an augmented reality headset created to combine any two objects, carrying it with them to their next destination, the Mushroom Kingdom.

It’s an excuse to put guns in Mario and Luigi’s hands, and design piranha plant-Rabbid hybrids.

The mere presence of the wild and crazy critters throws the Mushroom Kingdom out of wack – and to make matters worse, the Rabbids start inadvertently fusing with whatever’s nearby, creating violent hybrids. It’s up to Mario and Beep-0, a small rabbit-eared robot created by the same inventor who made the fusion device, to restore order and save Spawny, the adorable headset-wearing Rabbid who accidentally fused with the device.

The premise and story of Mario + Rabbids are beside the point. They are an excuse to put guns in Mario and Luigi’s hands, design piranha plant-Rabbid hybrids, and play with them in an animated toy box. The structure, which director Davide Soliani has described as a “tactical adventure,” alternates between RPG-style puzzle sequences and turn-based strategy combat. Most sections of the game feature an “exploration” phase, where Beep-0, Mario, and your team complete relatively simple puzzles.

Knowing what’s “going on” isn’t important for enjoying either part and, to be honest, it’s probably better if you grasp the ideas too tightly. As fan service, it sings — plenty of cutscenes and conversations feature some cute, fun quips, and “inside” jokes that will definitely make Nintendo fans smile.

At times, though, the story can start to drag. Beep-0, the only speaking character on your team, makes the same exposition-heavy points again and again over the course of the game because, frankly, there isn’t a whole lot to talk about.

The same issues also apply to the game’s “exploration” sections. While there are plenty of puzzles to solve, both required and optional, they tend to get repetitive. Many, if not most, of the puzzles involve pushing blocks around or flipping switches. The goal is always clear, and the solution is never far from your mind.

It doesn’t help that the rewards for most puzzles are not relevant to the game’s core gameplay. Aside from a set of tightly timed block puzzles accessed by jumping in blue cannons, which always reward you with new weapons, puzzles tend to safeguard concept art, songs from the soundtrack, and other collectible side content that may be fun to glance at, but never offers strong motivation.

Luckily, story and exploration play second fiddle to the core of the game – combat.

At the start of each battle, players create a squad with Mario and two members of your party, which includes Luigi, Peach, Yoshi, and the Rabbid versions of all four characters. The characters move about each stage on an invisible grid, rushing between different types of cover. In the most general terms, the mechanics push both sides to outflank and expose the other, while keeping their own position secure.

These basic building blocks are familiar, and may even appear derivative at first glance, but Mario + Rabbids adds new fundamental mechanics. Together, the tweak the game enough to take it in a new, unique direction.

Unlike XCOM, which constantly asks you to play the odds and make risky maneuvers, Mario + Rabbids makes it clear whether or not your attacks will land. If an enemy is exposed, you will hit them. If they are partially covered, you have a 50-50 shot. If they are hiding behind full cover, they’re safe. Most cover can be destroyed, though, so your characters need to keep moving. To help in that, characters can cover a lot of distance with a mechanic called team jumping. Any character can run to an ally and get a boost, throwing them high into the air so they can cover more ground, or reach an elevated position.

Each character has a unique set of weapons, abilities, and traits that weight them towards specific roles. Because you only use three characters at a time, you have to make trade-offs no matter who you use. Taking Luigi, a highly mobile sniper with low health, means you may not be able to bring Rabbid Peach, who has healing and defensive skills that make her good for drawing enemy fire. Each character can use each of their three actions — movement, attack, and special ability — once every turn, and you’ll have to use them all as much as possible, so every character quirk matters.

As you’d expect, Mario + Rabbids throws in some light role-playing progression for your squad. Characters earn skill points, which can upgrade skills in various ways. The upgrades, by and large, don’t change how the abilities works, but instead skew the characters to become stronger in certain roles. This lets you add a little personal flavor to your squad, shoring up your weakness or – if you’re bold – doubling down on your strengths.

You can also buy and equip new versions of your weapons throughout the game, making them more powerful. The weapon you choose assigns a “super effect,” adding a chance that your attack will restrict your opponent’s ability to move or act on their next turn. The effects you bring into battle can create new opportunities to do even more damage each turn, keeping your squad’s momentum up. Some effects help by giving you a tactical advantage: A shot with “bounce” will throw your enemy out of cover, exposing them so your team can take a clear shot. Or you can use “Ink,” which stops your opponent from attacking, throwing a wrench in their plans.

Mario + Rabbids maximizes the sheer glee you get from winning in strategy games.

All of these mechanics and ideas blend into create a game that moves very quickly. To be fast and efficient, you have to build a team that compliments each other. All of Mario + Rabbids’ systems are designed specifically to be layered, causing chain reactions that dismantle enemy formations and, for a moment, turn the highly regimented strategy board into a wacky playground.

Mario can, for example, shoot an enemy Rabbid with a bounce weapon, sending them flying out of cover. Once they’re in the air, they would trigger princess Peach’s “Royal Gaze,” an ability that allows her to shoot any enemy that moves out of cover. Peach’s shot may cause the burn, which does extra damage, causing them to run around screaming with their butt on fire. If they run into other enemies, they’ll start running around too, forcing them out of cover. In moments like these, Mario + Rabbids maximizes the sheer glee you get from winning in strategy games. Setting up a crazy combo and watching it unfold is incredibly fun.

When used against you, though, those same mechanics can make the game feel “unfair” at times. Having your whole plan blown up by an unfortunate chain of attacks can get frustrating, especially if it happens when you’re stuck on one of the game’s especially challenging boss missions. Luckily, the game moves at fast clip — most missions are designed to only take a few turns — so losing a mission never amounts to much in the way of lost time.

There’s always more to do

Though most of Mario + Rabbids is heavily focused on its singular campaign, it also offers a way to draw out more fun. After completing each world, including the final one, you can return to each of its exploration sections to find new challenge battles, which add additional constraints or requirements onto existing levels. These challenges allow you to “grind” for extra coins and ability points if you’re having trouble during the campaign, but they also serve as a nice way to break up the montonony of the campaign missions, which generally task you with simply defeating your enemies, or completing core strategy game objectives, such as escorting a friendly ally from end of a map to the other.

Taking advantage of the Switch’s detachable Joy-Cons, Mario + Rabbids also features two-player local-only co-op missions. In co-op, each player controls two characters, and must work together to complete challenges on specially made maps. While it is still effectively the same as playing a single-player mission, (albeit with four characters on the board), the back and forth between two people as you try and hatch your plan encourages teamwork. The fact that you have to play locally encourages you to play with friends and talk to each other, which definitely works in the game’s favor.

Mario + Rabbids: Kingdom Battle is not perfect, but most its problems can be ignored because they are relegated to portions of the game you can skip or speed through. The core experience of the game, the battles, are inventive and fun.

Though it is still a strategy game, and therefore a niche experience that appeals to a specific type of player, its carefree tone, bright colors, and fast pace make it feel inviting. There’s plenty of nuance to find in Mario + Rabbids: Kingdom Battle, so long as you’re willing indulge its playful side.

No. First, Mario + Rabbids: Kingdom Battle is one of, if not the only, strategy RPGs on the Nintendo Switch. On PC and other consoles, options like XCOM 2 and Fire Emblem: Awakening offer similar gameplay, but they’re generally less accessible.

The Mario + Rabbids: Kingdom Battle campaign took about 20 hours to complete, including doing most of the optional puzzles and some of the challenge missions. Though we can only estimate, completing every part of the game, including co-op, should take between 40-50 hours.

Yes. Mario + Rabbids: Kingdom Battle is a blast. If you like strategy games, this is freshest take on the genre you’ll play all year. If strategy games interest you, but you’ve been afraid to dive in, this is a good way to dip your toe in the water.

Mario + Rabbids: Kingdom Battle was reviewed on the Nintendo Switch using a copy of the game provided by Ubisoft.