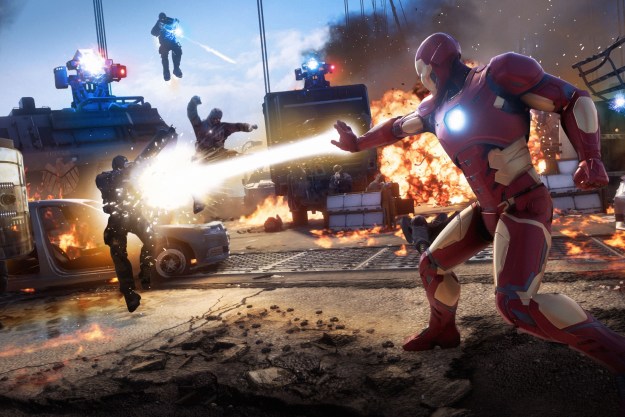 “Marvel's Avengers beta has enough content to let players know if the full game will be for them.”

The good news is that the Marvel’s Avengers beta provides an impressive amount of content for curious players to sink their teeth into. The not-so-good news is that it might not be everyone’s cup of tea. Those with a deep-rooted affection for these heroes and who enjoy ever-evolving titles like Destiny 2 will leave the beta excited for the full game’s release. Players looking for a focused, linear story might be disappointed by the games’ repetition and the grind for loot.

The game takes no shame in emulating other popular live-service experiences, even improving on them in some aspects. It also peppers in excellent gameplay among its varied characters. It’s a shame then that Avengers‘ reliance on its multiplayer framework is so compromising to other elements of the game.

Story is thin but good

The preview features a sliver of the included story, which is pretty well-written and certainly well-performed. I can’t say for sure if purchasing the game will be worthwhile for those seeking the single-player story exclusively, but it’s certainly not the focus of the title, and there’s polish to the campaign that is missing because of that fact.

The tutorial level that takes place on the Golden Gate bridge is the least fun part of the beta, and it’s the first thing you do in the game. While I understand the developer’s desire to give a taste of each of the characters, hot-swapping between them is not what they were designed for, and it therefore feels incongruent to the experience later in the beta. The tutorial is interrupted by short cutscenes every few minutes, which doesn’t help, and while it’s over quickly enough, it leaves a bad taste in the mouth as the game begins.

The Marvel’s Avengers beta provides an impressive amount of content for curious players to sink their teeth into.

The beta skips over a bunch of early levels that introduce Kamala Khan, the hero at the heart of the game, and picks up after she has already partnered with Bruce Banner on her quest to reassemble the team. You then play as both Hulk and Kamala, aka Ms. Marvel, in a linear and an open-ended mission.

Being dropped well into the game’s story means several features are introduced to the player immediately. It can feel overwhelming until you get into the game’s rhythm, but this hopefully won’t be an issue for the full release.

The more time I spent with the game’s beta, however, the more I found myself enjoying it. Troy Baker’s Bruce and Sandra Saad’s Kamala have some excellent moments together as mentor and mentee respectively, including a touching but lighthearted scene on the Chimera, a derelict Helicarrier the pair use as a home base. Still, it’s hard not to imagine Mark Ruffalo delivering the lines, as the Dr. Banner here is written so similarly to his MCU counterpart.

The heroes are at the center of the fun

After getting used to the controls, both characters, as well as Iron Man and Black Widow, whom the player unlocks with the multiplayer portion of the beta, feel great to play. The heroes are fundamentally controlled the same so that the player can get some muscle memory down, but the execution of their attacks and their effects on enemies are different.

It’s a testament to the games’ combat system that even Black Widow, a character with no superpowers, can still hold her own and feel just as fun to play as the full roster. It means that players will spend their time jumping between heroes, and while they may find a favorite as I did with Kamala, they won’t mind if they’re forced to play as another character in a multiplayer match.

The beta does not include Thor and Captain America, though they are in the tutorial and will be added upon the full release. The developers wouldn’t speak to their exclusion when asked, but something tells me from playing them in the opening level that they need a little more time in the oven. Hopefully, when the game launches with all six heroes, the roster will feel as balanced and enjoyable as it does here. It also gives me hope that the game will nail Spider-Man when he comes to PlayStation in 2021.

The gameplay improves further with skill trees and gear modifiers that allow you to upgrade your hero. Some of the attacks, however, are frame-for-frame identical to those in the MCU. There’s a move that Iron Man utilizes in the opening scene of Age of Ultron, where he takes out a couple of Hydra soldiers by flying directly toward them, only to bring himself to a hard stop with his hand repulsors at the last second to send the bad guys hurtling. This exact move is available through the skill tree in the game. Beyond feeling fantastic to execute, it also serves as yet another direct connection to the films.

I enjoy the elements of the game that lean into the Marvel Cinematic Universe, because I, like many other players, am a huge fan of that franchise. The problem arises when developer Crystal Dynamics goes out of its way to state that this game is something separate from those movies. It adds confusion to an already cluttered experience and makes me wish they’d either committed to their own vision or dove in deep with a playable version of the films, rather than this murky mishmash of the two.

Still, Marvel’s Avengers shines in its own right in its multiplayer option. In one scenario, I used a ground pound as the Hulk, which tossed a handful of bad guys into the air. Insult to injury was added as another player utilized Kamala’s high-five ability, a devastating move where her embiggened palm shoots out, sending the enemies hurtling into the stratosphere. Attacks also adapt to the enemy you’re facing. For example, the Hulk has an ability where he charges through a bunch of enemies, grabbing the final one in the chain and slamming them into the ground. However, if the last enemy is an opponent in a giant mech suit, the Hulk will instead leap onto its frame and smash down on it with his fists. For a game with so much repetition, these differentiators allow for moments of uniqueness to shine through and spur you on to jump into mission after mission.

Each character has two heroic abilities and one all-powerful ultimate move, the standout being Tony’s Hulkbuster suit, which briefly grants him the green Avenger’s strength in addition to Iron Man’s flight and blasting capabilities. I specifically mention this move not just because the Hulkbuster armor is one of the coolest things ever, but also because anyone in the group can use it. Imagine my surprise as I call in the suit while playing as Iron Man, impeded by a wave of enemies, and watch my friend as Black Widow jump into the hulking armor and smash till their heart’s content.

I had a handful of moments like this where the game’s problems melted away. It was some of the most fun I’d had playing in recent memory, audibly shouting an expletive at how cool what had just happened on the screen was.

However, while the gameplay is strong, it feels very similar to other Avengers experiences like the Ultimate Alliance series and the Lego titles. During missions, you’ll stumble upon crates to open for new gear and collectibles, as well as boxes to smash for resources. It’s all far more refined and enjoyable than previous games. Still, it doesn’t feel like it’s reinventing the wheel.

Aspects of the game improve the live-service genre

Hero missions, War Zones, and the quicker, more focused Drop Zones are initially accessible through the War Table on the Chimera once the single-player portion of the beta is complete. From here, the player is given a world map to access different parts of the globe, each containing a variety of mission types.

I had a handful of moments where the game’s problems melted away.

One area, the Tundra, which is the setting for the final single-player mission in the beta, is only accessible to revisit by completing a hidden side objective in one of the initial War Zones. Stumbling across this in the beta gave a glimpse of the depth and replayability the final game will have with all its content. The most interesting-looking environment, the East Coast city, shown off during the most recent showcase of the game, was unfortunately not available during our beta, but it was promised for the upcoming public ones.

The game shines over Destiny 2 in small but mighty quality of life improvements that its fan base has been seeking. In Avengers, there is an auto-equip button for your highest power level loot, and equipping gear from your locker, selecting a new mission, and accessing the marketplace for additional cosmetics can all be done without having to return to the Chimera. It’s hard to say what exclusive functionality the Helicarrier will have in the final game. Still, in the beta, I was able to do everything I needed to while sitting on the Quinjet, which serves as the waiting screen between missions. As you spend more and more time in the game on the grind for loot, this time saved is welcome.

Marvel’s Avengers is a game that 90% of the time is just fine, and 10% of the time will transport you into the world of these heroes like no other game. It’s a relief that outside of the tutorial, it never dips into actual bad territory, but the mundaneness of the game doesn’t feel appropriate for the Earth’s mightiest heroes, especially from a studio with such a pedigree for top-tier titles like the Tomb Raider reboot trilogy.

The Marvel’s Avengers beta gives a glimpse at the promise of what the full game might be, but its familiarity and focus on live-service multiplayer might be a turnoff for some.

Numerous recent games, such as Marvel Ultimate Alliance 3: The Black Order and Lego Marvel Super Heroes 2, provide an Avengers experience. For those looking for a live-service game, Destiny 2 is still the cream of the crop and has had numerous years to rework and refine its formula. Marvel’s Avengers improves on all these titles in key ways, however.

The story content in the beta is around an hour or so. The War Zones and Drop Zones range anywhere from five minutes to an hour, depending on their size and how much exploration the player is seeking. They are designed to be replayed, with each hero having a level cap of 15 and a power level cap of 45. If you maximize your time in the beta, there’s easily over a dozen hours worth of content.

In its current state, it’s hard to recommend pre-ordering Marvel’s Avengers to gain access to its beta.

There’s currently no crossplay feature, but the game will be playable across generations (so PS4 and PS5 owners can face off together, for example.) Crystal Dynamics says it is not currently attempting to allow multiplayer across platforms, but that any character exclusivity would not affect its plans.