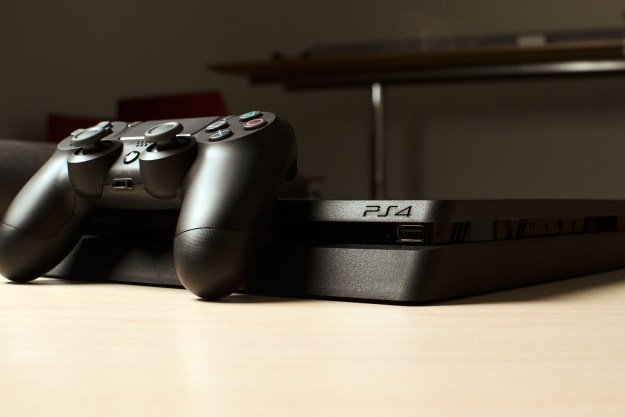 This review was last updated by Digital Trends contributor Cody Perez on 5/15/2020.

Three years after the launch of the PlayStation 4, Sony revisited its aging console to give it a new lease on life. As with previous PlayStations, the refreshed console has a slimmer new look, a few new features, and even some minor internal upgrades.

The “Slim” might appear underwhelming beside such ambitious brothers. It’s designed more to lure in players who haven’t bought a modern console yet than to appeal to current PS4 owners. Nobody wants to buy the lesser launch console, after all.

If you have strong feelings about the PlayStation 4 — good or bad — this console isn’t going to change your mind.  Other than a thinner figure, it has only one or two notable changes over the original model. The most important elements — its processing power, the feel of its controller in your hand, the library of games available on the PlayStation Store — have not changed. While the new PlayStation 4 is “better” than the original, the difference isn’t necessarily worth any additional investment, especially with a more powerful version on the market as well.

PlayStation gets a “fun” makeover

The most noticeable changes made to the new PlayStation 4 are going to be seen, not felt while you play.

On a functional level, the new console is considerably smaller than the original PlayStation 4, just over two-thirds the total size of the original PS4. It’s also a bit lighter: The Slim weighs 4.6 pounds, as opposed to the original’s 6.2 pounds.

More important, the Slim has received an aesthetic overhaul. The PS4’s distinctive shape, a sharp, slanted parallelogram, has been slightly softened with rounded corners. In front, the disc drive and two USB ports are now somewhat hidden in a shallow indent. On top, the console is branded with the PlayStation logo. Underneath, the console rests on “feet” shaped like the triangles, circles, and exes found on the console’s buttons.

The power and eject buttons, initially a pair of thin, black buttons on the front, are now much smaller and rest on the “lip” of the console in front of the disc drive. A large indicator light, which ran along the top of the console, has been removed. The light, which lets you know when the console is powering up or down, can now be seen in a small series of dots on the console’s power button.

The DualShock 4 controller has received a slight makeover, as well. The touchpad is now translucent, allowing a bar of light from the console’s colorful indicator light to shine through. While you won’t notice the change too often unless you routinely hold the controller in front of your face, it does provide easier access to the light at a glance. And the back panel, analog sticks, and direction pad buttons are now gray, rather than black.

While each change feels slight individually, together, they make the PS4 feel less self-serious than the original model. You get the sense that this product, while a substantial piece of technology, is meant for play, not business. The long light stripe on the console’s top had lent the console a premium feel and a bit of flair, overall the new console looks nice and maintains a lower profile. People looking for it will enjoy its attention to detail; others won’t notice as it fades into a shelf of routers, streaming devices, and other set-top boxes.

The most substantial improvement to the PlayStation 4 — the one reason you might consider buying one over the original — is its upgraded Wi-Fi compatibility. The Slim now supports 802.11ac Wi-Fi, which should lead to faster download speeds and more stability playing online for those whose routers support it. In my New York apartment, I was finally able to play games online over Wi-Fi, rather than by connecting through an Ethernet cable.

There’s one other system change most people won’t notice: with the Slim redesign, the PlayStation 4 loses its optical out port. If that news doesn’t immediately make you scream, then it doesn’t matter to you at all. The optical out is used for high-end home theater systems, and it will not make a difference for the majority of players.

The PlayStation 4 features a one-year warranty from the manufacturer, beginning the day the console is purchased.

Thanks to some minor tweaks and internal upgrades, the PlayStation 4 maintains its place as one of, if not the, premier dedicated gaming platforms. If you’re looking to play some video games and don’t plan to sweat the small stuff, you’ve come to the right place.

Not right now, and likely not until the next generation releases.

The Nintendo Switch is an excellent console, but it’s hard to call it an alternative. The Switch can be used as a handheld or docked console. To do that, it compromises on visual quality. Nintendo’s console also has a far different game library, so your choice depends on what you want to play.

Microsoft’s Xbox One X, however, is clearly a step behind the PlayStation 4, despite being much more powerful. Some gamers may still prefer it (if you’re a serious Gears fan, for example), but most will be better off sticking to Sony’s console.

That said, though, the PlayStation 5 is almost here, and you might be better off waiting for it, as it will play many of the same games on its system right at launch.

The PlayStation 4 is nearing the end of its life, as the PlayStation 5 will release at the end of 2020, so long as production isn’t affected. If you don’t mind being a generation behind, however, the hardware itself should last for years, perhaps decades, with a massive library full of excellent games.

Yes, if you don’t already own a PS4. The PlayStation 4 Slim is the most affordable version of this generation’s most popular console and, therefore, a great way to experience all of the amazing games this generation on a budget. However, if you can wait a bit and have the money to do so, you might wait for the PS5 this holiday season.