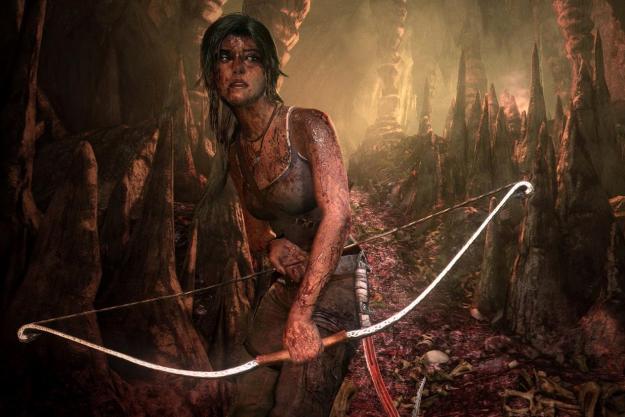 “The Definitive Edition of Tomb Raider is a marginal presentational enhancement to the undeniably excellent 2013 release.”

If you didn’t get around to Tomb Raider last year and you don’t have a gaming PC powerful enough to make deities tremble, then Definitive Edition is the version to get. A high-end computer still trumps all, but the new hardware handles these spit-shined graphics with no problems. If you did play Tomb Raider already then you need to ask yourself: is a prettier, mud-splattered face enough to encourage a second go? (Spoiler alert: It’s great game, running better.)

Lara Croft herself may benefit the most from Definitive Edition‘s enhancements. There’s considerably more definition in her face, a combination of enhanced shadows and lifelike eyes that blink and follow the camera’s movements. There’s also more detail in Lara’s outfit, which becomes increasingly ripped, torn, stained, and blood-spattered as the journey continues. It’s still a painted-on texture rather than independent articles of clothing that shift and fold around a moving body, but the added details create a more convincing illusion.

If you did play Tomb Raider already then you need to ask yourself: is a prettier, mud-splattered face enough to encourage a second go?

Lara also looks a little too “shiny” at times, presumably a byproduct of improved lighting effects that cause rays of light to scatter based on the texture of the surface they touch. It’s a convincing effect, with light playing realistically across Lara’s arm as you guide her through the world. The illusion is shattered somewhat, however, by her near-constant sheen of sweat. Natural sweat doesn’t coat a person’s body uniformly, but Lara appears to be wearing hers at times like a second skin. The quality of the lighting is what’s important here, but there’s still no mistaking the fact that next-gen Lara is a digital creation.

This holds true in the environments as well. More detail is evident, for example, in the way rainwater streams down a sheer surface, but the effect isn’t quite convincing enough. You’ll see a rocky cliff face whose “water texture” seems to shimmer as the water moves. Where you expect to see individual rivulets forming as gravity draws rainwater downward you instead get the impression that there’s a uniform blanket of shimmery water draped over the rock.

This is admittedly nitpicking. The visual improvements outweigh the shortcomings and Tomb Raider: Definitive Edition is a demonstrably better-looking game than the 2013 console release. The flickering fire of a torch throws moving shadows around in underground chambers and muted sunlight seeps across the game’s open world-lite hubscapes. Things like the extra-shiny Lara or the unconvincing flow of water break the illusion somewhat, but it’s more a reminder that you’re playing a game that’s been spruced up for re-release.

Performance trumps all, and that’s where Definitive Edition never fails to impress. The Xbox One version maintains a rock-solid frame rate, even during the busiest action sequences. We weren’t able to play on both consoles so we can’t speak to differing frame rates between the two. Seekers of controversy, please take your tinfoil hats elsewhere. The Xbox One seems to sit right around 30fps – which may be a dealbreaker for some – but it’s important to note that the frame rate never wavers. It’s a stutter-free experience.

The lone new “feature” in Tomb Raider: Definitive Edition takes advantage of your console’s motion controls, though we were only able to play with Kinect. Voice commands offer quick access to maps, weapon swapping, and the like, though the voice detection is tad oversensitive. We ultimately turned the voice feature off when casual chatter brought up the pause menu more than once. There’s also some light motion detection at scripted moments that allows you to lean left and right to adjust the camera, but it falls more in the realm of Cool than Useful.

On top of all the technical enhancements, you also get a bonus tomb that was only available via pre-order in the 2013 release, as well as all of the post-release multiplayer DLC. We weren’t able to test out the latter prior to the game’s release, but it’s no different from the content that came out last year. The bigger challenge that Square Enix faces here is convincing players to invest in the progression-driven multiplayer mode even though they can’t carry progress over from the previous gen.

Tomb Raider: Definitive Edition is a newly released game for both next-gen consoles, and for that reason it’s going to be fine. If you’re a repeat customer considering the question of whether or not the game is worth a second runthrough, our answer is “Probably not at full price.” But if you’re a newcomer itching to use your next-gen, Tomb Raider remains an excellent game and this Definitive Edition sets the overall performance bar very high.

This game was reviewed on an Xbox One using a code provided by the publisher.

You might get your Steam Deck sooner than you think