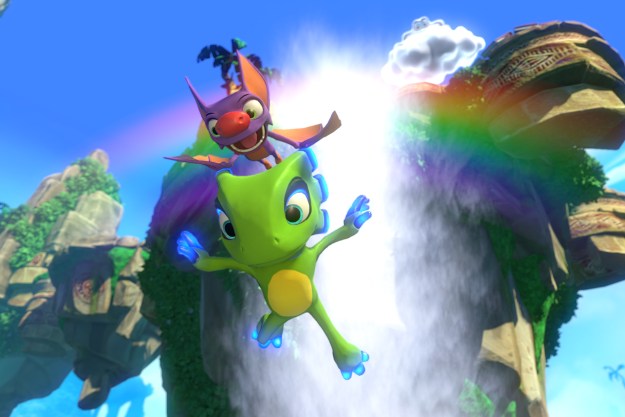 “'Yooka-Laylee' recaptures the feeling of the beloved 'Banjo-Kazooie', but fails to add anything substantially new or interesting.”

Despite what anyone might have predicted at the turn of the millennium, 3D platformers have gone the way of the dinosaur. Classic 2D platformers are alive and well: Breakout indie hits like Braid, Super Meat Boy, and Limbo paved the way for high profile revivals like Donkey Kong Country Returns and Rayman Origins. Apart from the steady contributions of genre patriarch Mario, however, 3D platformers have been relatively neglected since their turn-of-the-millennium heydey.

Banjo-Kazooie, a 1998 3D platformer created by developer Rare for the Nintendo 64, serves a touchstone for a very specific type of game. The eponymous bear and bird duo explored colorful worlds full of goofy, anthropomorphic characters, scouring the environment and solving puzzles for collectibles which in turn unlocked more areas to explore with the ultimate goal of taking on the witch who kidnaps Banjo’s sister at the beginning. Mario 64 established the template for the 3D platformer, but Banjo-Kazooie fleshed it out with unprecedented texture and character.

When key members of the Banjo-Kazooie team formed Playtonic Games to develop a spiritual successor, fans salivated at the prospect and blew past the project’s Kickstarter goal more than ten times over. The creators of other beloved classics from neglected genres crowdfunded their own spiritual successors like Pillars of Eternity and Thimbleweed Park to critical acclaim by recapturing the feeling of their predecessors while sanding off outmoded frustrations.

Yooka-Laylee feels very much like you’re playing Banjo-Kazooie with a new coat of paint. For a lot of fans, particularly those that funded it, that may be all they need. Without the rose-tinted glasses, however, the game has a hard time standing out on its own.

Like Banjo and Kazooie, Yooka the lizard and Laylee the bat “combine” to make a single symbiotic protagonist: Yooka does most of the running and jumping, while Laylee, perched on his shoulders, provides support with limited flight and sonar blasts. At the top of the game, Capital B, a suit-clad bee embodying corporate greed, commences his plan to steal all of the world’s books, giving him a monopoly on literature. One of these books sucked into Capital B’s factory is a magical book that Laylee had recently found and was excited to pawn because of its golden pages, and so the two set out to get it back.

Like Banjo and Kazooie, Yooka and Laylee form a symbiotic protagonist as a lizard with a bat perched on his shoulders.

As the book is being stolen, however, its pages fly out of the spine and hide themselves throughout the world. Tracking down these golden “pagies” (which are frequently locked up in “cagies”) comprises the core loop of the game. Capital B’s factory serves as the hub world, but collected pagies unlock five different themed worlds contained within books (à la Myst) throughout the factory. These worlds in turn contain more pagies, which you collect by completing various challenges, such as timed platforming courses or environmental puzzles. More common are quills, which you spend to buy new abilities such as rolling or a butt slam that, Metroid-style, allow you to explore new areas of the game.

You need 100 pagies to tackle the final boss, out of 145 spread throughout the game. That means that no one pagie is required, so any given puzzle or boss that might give you a hard time is skippable. This allows you to curate the experience to an extent, and avoids bottlenecks.

Apart from obviously improved visuals, nothing about Yooka-Laylee feels particularly new or innovative. More a slavish reproduction than a long-awaited evolution, it carries some of the original game’s attendant frustrations along with its pleasures.

Frustration grows in the gap between when you figure out how to do something and when you successfully execute it. Modern platformers, such as Super Meat Boy, have made repetition palatable with instant retries and bite-size levels, but adding any buffer between attempts at a tough platforming challenge can be maddening.

Yooka-Laylee has not learned this lesson: You will have to repeat the game’s increasingly difficult platforming sequences, and the time you waste — waiting for the game to load and, often, returning from the entrance of a world to that specific mission — will erode your desire to meet its challenges.

The game’s final boss is particularly hard, offering no opportunities to heal throughout its various phases, making the fight very unforgiving.

The Nintendo 64’s notably strange controller featured a single analog stick, leaving the camera out of the player’s hands in Banjo. Yooka adopts the modern convention of controlling the camera with the right analog stick, but still carries frustrating echoes of its past. We found ourselves fighting with the camera far too often as it would swoop around in a hard-coded transition, screwing up jumping angles or making it hard to observe the environments for missed collectibles.

This is more of a slavish reproduction than a long-simmering evolution, and it brings with it some of the original game’s attendant frustrations as well.

Such retrograde gameplay could be forgiven if the world and characters were exceptionally charming and well-designed, but here too the game merely whelms. The five book worlds look nice, but are thematically very basic (jungle, ice, swamp, casino, and space). The models and animations of the two lead characters look great, but a lot of the other characters feel much less refined.

Much of the game’s plot and the world-building feels a bit arbitrary. The writing leans into this, with Laylee dropping meta-aware quips about the video-gaminess of what they’re doing. The game doesn’t follow through with the parody enough, however, to elevate it above the lazy referential jokes that comprise a lot of gaming humor.

To an extent, Yooka-Laylee’s crowdfunding success has already justified its existence. For many fans “more Banjo-Kazooie” is exactly what the doctor ordered. Those hoping to see an outpouring of new ideas, the kind that might revitalize the genre, will be disappointed. It feels more like a museum piece than an evolution.

Although part of Yooka-Laylee’s premise was that 3D platformers are a neglected genre, there are still plenty of more interesting, modern games available on a variety of platforms, like Papo & Yo, Psychonauts, or modern Mario titles.

It took us about 24 hours to beat the game after acquiring the minimum number of pagies, leaving quite a few more puzzles, challenges, and mini-games for completionists to enjoy.

If you have a strong, nostalgic connection to Banjo-Kazooie and Nintendo 64-era platformers, this will feel pleasantly familiar. Otherwise, you can pass for something more modern.

This game was reviewed on Xbox One with a copy provided by the publisher.

The best PS5 headsets
The best multiplayer games on Nintendo Switch
The best Nintendo Switch games for 2022
The best upcoming Nintendo Switch games
Don’t miss this Xbox Series S Cyber Monday deal — ends midnight
Now’s the perfect time to stock up on PS5 controllers
How to evolve Tandemaus into Maushold in Pokémon Scarlet and Violet
Fortnite Chapter 3, Season 4 guide: All week 10 quests and how to complete them
All Fortnite Chapter 3, Season 4 quests
‘Wordle’ today, November 29: Answer, hints, and help for word of the day (#528)
Crisis Core: Final Fantasy VII Reunion works best as a portable game
Oh no, I’m already obsessed with Nintendo Switch Sports golf
Fae Farm is shaping up to be the coziest farming game ever