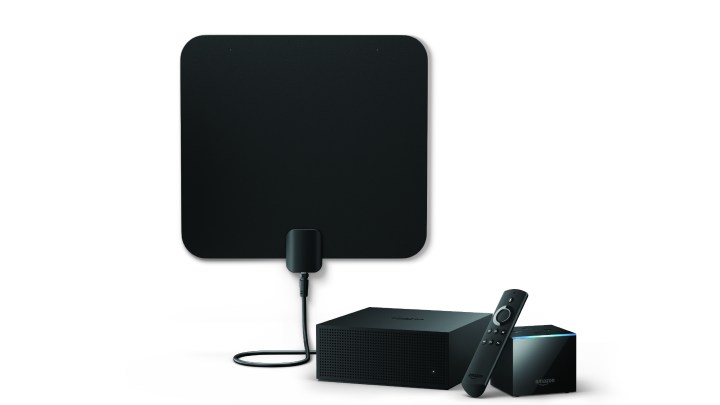 Not content to simply give streaming services like Netflix a run for their money, Amazon has taken aim at cable and satellite providers. Revealed at Amazon’s Seattle hardware event alongside a mountain of other new Alexa devices, Amazon’s new Fire TV Recast is a combo OTA receiver and DVR that’s designed to stream free over-the-air HD content to Fire TV, Echo Show, and compatible Fire tablet and mobile devices.

Fire TV Recast comes in two flavors: A $230 two-tuner model with a 500GB, 75-hour-capacity DVR, and a $280 four-tuner unit that houses a 1TB, 150-hour drive. It will let you record up to two or four shows at once (depending on the model), and stream on multiple devices at a time. If you need more recording capacity, you can add it via a USB-connected external hard drive, for virtually unlimited recordings.

It’s a move that will no doubt thrill cord cutters intent on ditching their monthly cable bill, but it also signals yet another category that Amazon wants to dominate: OTA hardware. The 800-pound gorilla in this space is TiVo, which currently sells its Roamio OTA Vox receiver for $399, along with its All-In, no-monthly-fee service. There are others like Tablo TV, and more recently, Plex.

Recently, Amazon added the ability to specify the show you want to record, and then decide if the DVR should record all instances of that show across all channels or just the episodes that air on a specific channel, according to CordCutterNews. That would be redundant on cable or satellite where all channels come in with similar quality, but OTA can be a different story. It might be worth the risk of episode duplication if you can find a clearer signal on another network.

Of course, no Amazon device would be complete these days without Alexa support, and Fire TV Recast is no exception. You can search for shows, browse recordings, change over-the-air live TV channels, control playback, and schedule, cancel, and delete recordings using your voice. The Fire TV Recast doesn’t have far-field microphones or a voice-enabled remote — instead, it will only take Alexa commands via other networked devices, like an Echo, Echo Dot, Sonos One, etc.

When we got our hands on a Fire TV Recast, we were impressed by the sophistication of the user interface, which felt like a natural extension of the Fire TV product. The setup procedure is dead simple, including a wizard that helps you find the perfect placement for your OTA antenna (not included with the Fire TV Recast). Unlike some other OTA solutions, the Fire TV Recast can be placed anywhere in your home that has access to power, your OTA antenna’s input cable, and a strong Wi-Fi signal. The device also has an Ethernet port, in case you’re in the unlikely situation where a wired connection proves easier.

We’ll keep you updated as Amazon adds new features to the Fire TV Recast, so be sure to bookmark this page.

Topics
Is there a Sling TV free trial? Here’s what you need to know
Peacock does away with free tier for new subscribers
Klipsch follows the success of The Fives with The Sevens and Nines powered speakers
Marshall’s latest Bluetooth speaker has four drivers for 360 sound
The Super Bowl is finally in Dolby Vision – if you have Comcast
Go big or go home: this 85-inch Samsung 4K TV is $300 off
McIntosh’s new $8,000 AVR: gigantic power, with a Dolby Atmos catch
The best shows on Disney+ right now (February 2023)
The best outdoor TV antennas for 2023
The best wireless earbuds for 2023
This 75-inch Samsung 4K TV is $120 off, delivered by the Super Bowl
Netflix screwed up, but that doesn’t mean it’s wrong
Best 65-inch TV deals: Save on QLED and OLED for Super Bowl