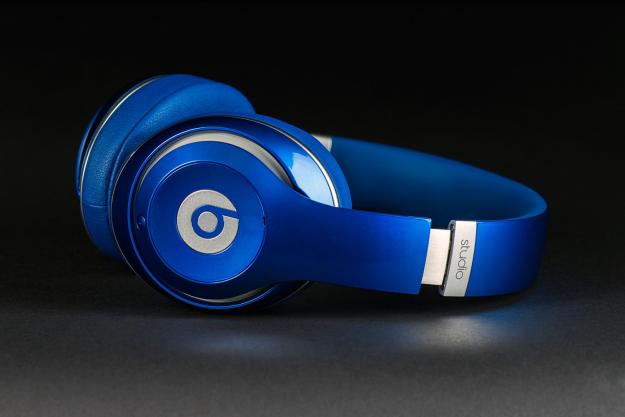 “$380 seems a little steep for what you get out of the Studio Wireless, but we’re pleased to see Beats head in a positive direction with its re-design.”

Also check out our review of the Beats Studio wired model.

Since the Beats Studio Wireless are essentially the wireless version of the Beats Studio headphones we reviewed recently, we figured this would wind up being a pretty straightforward review. The way we saw it, either the Bluetooth sound quality was going to be good or it wasn’t – everything else would stay the same, right? Close, but not exactly.

Aside from adding $80 over the price of standard Studio headphones, Bluetooth brings a few differences in how you use them. What came as a surprise, however, was a variance in sonic performance. Still, many of the basic design elements remain the same, so if you find yourself thinking this review reads a lot like our Beats by Dre Studio review, you’d be right.

Our first impression of the Studio Wireless was mostly positive. Like the revamped Studio headphones, this wireless version is considerably lighter and more streamlined than it predecessor. The design is almost entirely curves, and the material in use feels more flexible and resilient.

Along the top of our review sample’s glossy blue headband (the Studio Wireless are also available in glossy black, red and grey, with a special matte black version available) Dr. Dre’s name has been omitted in favor of the Beats moniker instead. The headphones have a less industrial feel too, keeping screws mostly hidden from sight. Overall, the new Studio Wireless have a cleaner, less clunky feel to them than the previous version did.

Removing labels from the on-board controls gives the Studio Wireless a cleaner look, but track-advance and reverse no longer have their own buttons. Instead, you have to double or triple-press the red “b” button on the outside of the left ear cup, which also serves as the play/pause button with a single press.

In the box with the headphones we found two red, rubbery, tangle-resistant headphones cables – one with an inline control microphone, one without – both with 90-degree 3.5mm input jacks, a USB charging cable, a USB wall adapter, a requisite carabiner, some product literature, a Beats sticker, and a microfiber cleaning cloth.

The new Studio Wireless still sport spongy memory-foam ear pads covered in soft leatherette, and we’re still fans of how they feel. Unfortunately, the underside of the headband remains under-padded. The undersized travel case also remains the same size despite more and larger accessories, making it even more cramped. Cramming everything in the case is an exercise in frustration.

Beats managed to increase battery life in the new model by two hours, now offering 12 hours of wireless audio performance, or 20 hours when wired up. Battery strength and power status are represented by a row of five small, white LEDs and a single LED on the power button, all of which live on the underside of the right ear cup. You’ll also find a battery-level icon on iOS devices, right next to the Bluetooth symbol.

The new Studio Wireless feature the same dual-mode noise-cancelling circuit: one for music listening, the other for simply shutting out the racket around you. The so-called “Beats Acoustic Engine” uses DSP (digital signal processing) to ensure the headphones produce a specific sound signature. From our listening tests, we suspect the noise-cancelling and acoustic-engine processes are in cahoots.

Many folks (including ourselves) sometimes have trouble remembering to turn off active noise-cancelling and Bluetooth headphones, so the inclusion of an auto power on/off feature here is a welcome one. It is important to note, however, that the auto power feature only works when you insert or remove the headphone cable from the left ear cup. If you fail to turn them off manually and pack them up with the cable still inserted, they’ll remain on until they’re dead (which we learned the hard way, naturally).

We’re pleased to report that the Beats Studio Wireless actually sound a little bit better while streaming music via Bluetooth than they do when they are hard-wired, or compared directly to the Beats Studio. This may be because the wireless streaming process pulls some of the treble response back just enough to make the headphones a little less aggressive in the highs, and, therefore, less grating in general. The treble still sparkles, and it’s well north of neutral, but we found ourselves more interested in listening to the Beats Studio Wireless on the long term than any other Beats headphone we’ve auditioned so far.

The Beats also held their own at blocking out noise. In terms of passive noise isolation, we felt the Studio Wireless did better than the Phiaton or PSB, but when it came to active noise cancelling, the race was much tighter. Both the PSB and Phiaton did just slightly better with airline and train noise than the Beats, but just slightly. Also, we’re happy to report the odd thumping in the right ear that we heard with the Studio is not present here. No matter how you slice it, however, Audio-Technica and Bose have them all beat when it comes to noise cancellation.

With all of that that said, the Studio Wireless just couldn’t hold up to the Phiaton Chord MS530 or the PSB M4U2 in terms of pure sound quality. The Studio Wireless’ sound signature seemed to change with the volume, becoming more aggressive in the treble and upper mids as the volume was turned up. The Beats’ midrange, wasn’t as color-free as the Phiatons or even the PSB headphones, due mostly to their forward upper midrange. But when it came to the bass, we remain pleased with how Beats reined the low end in, keeping things in check, if still intentionally heavy-handed.

Now we’re going to take off our audiophile hat for a moment and get right down to what’s most important: how the Studio Wireless’ intended audience will feel about them. In short, we think they’ll love these headphones. They combine all the most popular features in a slimmer, sleeker package with better battery life. The only turn-off is the price. At $380, these headphones seem a little over-priced, even with their super-popular, iconic image taken into consideration.

The Beats by Dre Studio Wireless won’t win the hearts of audiophiles any time soon, but the company did a good thing by taming the bass and presenting a clearer overall sound. Thanks to the Bluetooth streaming process, these headphones manage to keep sparkling treble without aggravating us with piercing highs all the time. As a result, we wore the Studio Wireless headphones for a much longer than any other Beats headphone we’ve tested thus far. $380 seems a little steep for what you get out of the Studio Wireless, but we’re pleased to see Beats head in a positive direction with its redesign.

Everything leaving Netflix in July 2022