The last couple of years of CES have been odd, to say the leas. First there was a weird digital-only year, and then last year’s kind of cautious toe-dip, neither of which delivered the marquee splendor that we all look to CES for: eye-popping, big, beautiful TVs!

Good news: CES 2023 showed us that the massive technology conference is back in full force, more than making up for it with some stunning new TVs from all the major players and then some. There were some surprises on the show floor, and a lot to talk about, which we will keep doing well into review season, but for now, here’s our recap of the best TVs of CES 2023. 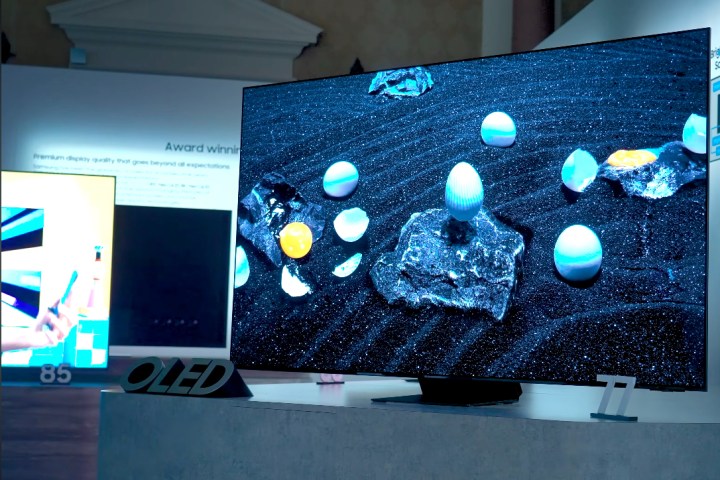 Samsung always brings it at CES, and this year, to say that the company was on point is a total understatement. The company us not one, but two amazing panels in the Samsung S95C OLED and the S90C OLED. Samsung didn’t just give us the 77-inch TVs we were asking for — it came up with a new model series as well.

Based on Samsung’s QD-OLED technology — the QD stands for “quantum dot” — the S95C combines the deep, inky blacks of OLED with the superior brightness of QLED, making it the top dog QD-OLED TV from Samsung — we liked it so much we added it our Top Tech of CES 2023 Awards list. It’s available in the big 77-inch model, yes, and also in more manageable 55- and 65-inch sizes, too. It has Samsung’s new QD-OLED panel (more on that below) that is, according to Samsung, 30% brighter than its S90C sibling, and pumps out up to 2,000 nits of brightness. It’s also beefed up the refresh rate from last year’s S95B, going from 120Hz to 144Hz.

The biggest difference between the S95C and S90C is the former’s external One Connect box that this year is stylishly built into the stand mount at the back of the TV. The features don’t stop there, though, with the S95C also getting an improved audio system with a Dolby Atmos-capable, top-mounted 4.2.2 channel setup and 70 watts of power, plus AMD FreeSync Premium Pro certification and an updated Gaming Hub.

Either way, the new, even brighter QD-OLED panel could make a game-changing TV even more awesome. If the color brightness and overall luminance end up being as bright as they can be, then we could be looking at another year where Samsung has a dominant top-tier TV.

It’s impossible not to think of the LG G3 OLED evo as LG’s answer to Samsung’s QD-OLED. But the fact is that LG Display (the sister company behind LG’s TVs that also supplies OLED panels to other manufacturers) has been working on developing brighter OLED panels for quite some time. Here, we get OLED EX with deuterium and heat sinks. And then LG Display developed OLED META — that’s META all caps, not the Facebook parent company — which uses a micro-lens-array to reclaim light that is usually lost in the panel, and put it out toward the viewer.

Now, many TV nerds have been quick to point out that the higher brightness claims may not apply to color brightness. But I can tell you that after checking out the LG G3 evo at CES 2023, the colors were brighter than before without looking washed-out. It’s fine to speculate, but until we actually measure the G3, we don’t know what its actual color volume capability is. Stay tuned for that in the months to come. LG itself says that the uptick in brightness is thanks to the TV Brightness Booster Max tech, which it claims will deliver up to 70% more brightness to the G3 evo’s 55-, 65-, and 77-inch models.

But the truth is that the LG G3 just looked straight-up amazing. If the idea was to make an OLED TV that looks punchier in a bright room like its QLED rival, I think LG has done just that. Throw in a new One Wall Design that leaves no visible gap between the TV and the wall when mounted, and the LG G3 evo is a panel to keep an eye on.

Next is another LG TV, the M3-Series OLED, which wowed everyone at CES 2023 with its huge 97-inch (diagonal) size. Sure, it was big, but that’s not even the coolest part. This is an entirely new series of OLED TVs whose headlining feature is what LG calls the Zero Connect box, which essentially makes it wireless. Zero Connect allows you to connect all your components to the box — AV receivers, soundbars, streaming boxes, game consoles. It will then wirelessly beams the audio and video signal to the TV. So, at this point, all you need to do is plug the TV into power, and you don’t have to plug in anything else. No running conduit, no running HDMI cables, and no wondering if they are good enough over the distance.

The wireless transmission is lightning fast and has super-high bandwidth — so there’s virtually no latency and no loss in signal quality. This is the coolest connectivity development we’ve seen since Samsung’s One-Connect box.

TCL is a TV brand that has made huge headway in recent years, with an impressive lineup of QLED and mini-LED TVs at nearly unbeatable prices. For CES 2023, TCL came out of the corner swinging, turning heads with a 98-inch mini-LED QLED that’s part of its TCL QM8 Series. This is TCL’s new flagship TV, and it doesn’t just replace the 6-Series — it aims to exceed it.

It’s available in 65-, 75-, and 85-inch sizes — and all the way up to 98 inches. It has mini-LED backlighting, and more backlights and dimming zones than TCL has ever offered before. And although TCL didn’t talk it up a ton, it looks like the processing has seen some improvements as well. The demo footage being played on this TV at CES looked incredible. Off-axis performance still needs a bit of work, but otherwise this is going to be one of the highest-performance TVs you can buy in 2023. And the price, as usual, will probably be surprisingly low.

Definitely one of the more interesting TVs on the CES show floor this year was the Hisense ULED UX, its brightest creation to date, which it showed off with a massive 85-inch panel. This 4K mini-LED QLED is powered by Hisense’s new ULED X platform that the company claims can achieve three times the “environmental contrast” of OLED TV, and two times the dynamic range. It’s a bit of a gamble for the value-focused TV maker as it is a super high-performance TV with peak brightness exceeding 2,500 nits — honestly, it probably does 3,000 — a ridiculous number of backlights and dimming zones, and some incredibly effective off-axis performance. Hisense also claims it’s working on improving its processing.

Rounding out the features, Hisense says that the ULED UX will support Dolby Vision, Wi-Fi 6e, NextGen TV, and AMD’s Freesync Premium Pro. It comes equipped with a new audio system, CineStage, which boasts power in excess of 80 watts, with seven speakers and Dolby Atmos.

Our next entry on this list of the Best TVs at CES 2023 is from Hisense too, and it’s the L9 Series Ultra Short Throw Trichroma Laser TV. Yes, it is technically considered a TV, though really it is an ultra short-throw projector and ambient light-rejecting screen paired together. Whatever it is, this thing is ready to tackle bright rooms. The screen is included and is made by Hisense. It’s got high gain and reflects a good amount of the projector’s output back at viewers while rejecting light from above and coming in from the sides. One of several projectors announced by Hisense at CES this year, the L9 series is the flagship and features a triple-laser light engine, HDR 10 and Dolby Vision, and an impressively bright 3,000 ANSI lumens. It also runs on the Google TV platform, is AirPlay 2-compatible, has an ATSC 3.0 tuner built-in for over-the-air broadcasts, and is Wi-Fi 6e for fast connectivity.

But who’s this thing for? There are many situations in which you will never get a 100-inch or 120-inch conventional TV into a space — even 85-inchers can be too big for some situations, like certain NYC apartments. But this thing will fit just fine. At this point, the only thing keeping me from suggesting that this might be the best big-screen option for most folks is the price, which we don’t know yet. But, I mean, it’s Hisense, so I am expecting it to be attractive.

The last TV on our list is, unfortunately, not a TV you can buy in the U.S. Still, the Panasonic MZ2000 was one of the best TVs at CES 2023 and is totally worth mentioning here. We don’t talk a lot about Panasonic here, but its processing and picture quality is right up there next to Sony’s, which, oddly, was a no-show as far as TVs go at this year’s CES.

In keeping with the theme of improved TV brightness at this year’s show, the Panasonic MZ2000 is built on a new panel design using something called Micro Lens Array technology, which gives it, Panasonic claims, an up to 150% bump in peak brightness.

Panasonic’s MZ2000 line will be available in 55-, 65-, and 77-inch sizes, but only the 55- and 65-inch models will get the new Micro Lens Array tech. We won’t spend much more time on a TV you can’t get here, but we’ll cap this roundup off by saying that the MZ2000 is said to boast Panasonic’s best HDR performance to date, a “Streaming 4K Remaster” algorithm that is said to be able to improve the quality of streaming entertainment, and some features gamers will like, including a 120Hz variable refresh rate (VRR), AMD FreeSync, and Nvidia G-Sync. Maybe you can visit the U.K. and fit one in your luggage.

Topics
The best audio gear from CES 2023
Sharp is bringing one of the first OLED Roku TVs to the U.S. in 2023
TCL says its QD-OLED TV teaser from CES 2023 was an error
Is 8K TV dying? It’s not looking good at CES 2023
The best speakers for 2023: great hi-fi options for music and more
The best Blu-ray players for 2023
Why the Nest Hub Max still rocks as a kitchen TV
Stream live sports without cable with Sling — now 50% off
OnePlus Buds Pro 2 to support Android’s new spatial audio feature
Should you mount your TV above a fireplace?
Disney Plus Free Trial: Can you watch for free in 2023?
The best subwoofers you can buy in 2023
The best Dolby Atmos soundbars for 2023