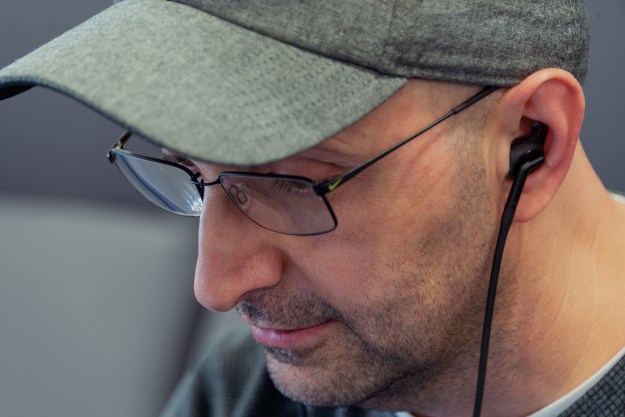 “Libratone’s feature-packed Track+ wireless earbuds prove great style and good sound can be had together.”

When we first encountered Libratone back in 2013, the Denmark-based audio brand made a lasting impression thanks to its bombastic designs, including a wild and wooly satellite dish of a speaker called the Loop, which would be right at home in a ‘70s dystopian sci-fi flick. Unfortunately, the sound of the speaker was just as bombastic, with aggressive treble and barreling bass that didn’t quite jive with our ears.

We’re happy to say that Libratone’s latest offering, the Track+ wireless noise canceling headphones, shake off that zany design, both aesthetically and aurally. A sleek and stylish pair of in-ear headphones, the Track+ offer a truckload of features, premium build quality, and balanced sound that make their $200 price point relatively easy to swallow. Still, you’ll want to read on before pulling that trigger and making them yours.

From the get-go, the Track+ reel you in with packaging that exudes the kind of stylish minimalism that made the likes of Apple and Bang & Olufsen household names. The dimpled exterior of a magnetic black box gives way to a heavy helping of sunken foam, within which the serpentine headphones sit as though frozen in time. Pulling the flexible, halo-style headband loose reveals a smooth, rubberized exterior interrupted only by the matte control bars and capsule-shaped earbuds.

Underneath the top layer is a second round of foam which houses a light (and once again minimalist) collection of accessories, including a basic startup guide, a white USB to MicroUSB charging cable, and an oval-shaped package of eartips — including horn-shaped tips to keep the buds in place for athletic outings.

If a product’s design pens its own narrative (and we’d argue it does), premium is indeed the thesis for the Track+ — especially considering their price point. The headphones feel extremely sturdy, backed by IPX4-rated splash-proofing, but they’re also quite light, both in your hands and around your neck, making them perfect for both the office and the gym. Meanwhile, little details like the angled arms that attach the earbuds to the rubbery halo-band and the gleaming exterior of the capsuled-housings add some notable class.

Both in your hands and around your neck, making them perfect for both the office and the gym.

Before you strap the buds on, we suggest downloading the Libratone app, served up by a QR code in the instructions that sends your phone’s scanner straight to the Libratone website. The app is helpful, as there’s a fair amount of tech to digest here, and the instruction booklet offers only a basic startup guide and control-key identification.

The Track+’s onboard controls are hosted by those two bars along the band mentioned above; the right side boasts volume keys, as well as a multi-function center key which controls play/pause/calling and song skip via a succession of clicks (two for forward, three for back). On the left side is another multi-function key, which powers the headphones on and also sets them for pairing to your phone, similar to most wireless earbud designs.

There’s one more function for the left-side key, as it also cycles through the Track+’s four levels of adaptive noise filtering. Alongside full-bore cancellation (rated at -20dB), there’s also a -12dB cancellation setting, a “0dB” setting, and a +6dB option to bring in ambient sound via outfacing microphones to keep you safe while navigating city traffic. Finally, the headphones also offer an Ambient Monitoring mode that only lets through sound, shutting down audio playback altogether.

But wait, there’s more. The Libratone app provides a visual guide to the headphones’ adaptive noise technology, allowing you to quickly spin through the options, as well as calling up on-board audio sources like internet radio stations, and even EQ controls.

Perhaps the app’s most intriguing function, however, is the Smart Mode, which combines your phone’s location, accelerometer data, and readings from the earbuds’ microphones to automatically adapt the cancellation tech to suit the environment around you for up to eight levels of audio filtering. The headphones will also go into bypass mode during periods of inactivity to save battery life (more on that below).

The Smart mode is fun to play with, and it works pretty well out on the street. The system knows when you’re moving, and raises the ambient sound around you accordingly (it’s also fun to see the little app person walking when you do). Ambient sound is lowered when you stop, and auto-adjusts to cancel out sound around you. The technology is smart enough to know you’re in the city, and even which areas are more congested, but in the end, we still preferred to adjust sound manually for better control. That said, the system will no doubt improve over time with better location tracking, which could make the Track+ even more compelling down the line.

Fit is, of course, always a personal thing, but after passing the Track+ around to a few colleagues, our conclusion is they’re relatively comfortable, if not a bit onerous over longer periods. The capsule-shaped housings are larger than many designs, and fit a little tightly in our ears, but the wide eartip selection — including the sport fins — should allow most people to find a good solution.

When it comes to the cancellation tech itself, even at its highest level (-20dB), this isn’t the kind of noise canceling that puts you in your own little corner of the universe like Bose’s QC20. Instead, it’s more like an added layer of intimacy for you and your tunes, aided by good passive noise isolation. Somewhat ironically, when we used the Track+ in our DT offices, the noise it cancelled out best was the white noise machines recently installed to afford our open office more privacy.

That’s not all that surprising, as those frequencies are along the same band as airplane noise and other droning sounds travelers look to extinguish. And while the Track+’s noise canceling isn’t the absolute best, it matches well with others in the Track+’s general price class, including the $150 Phiaton BT 150 NC (which don’t offer multiple levels of cancellation).

One point of issue we take with the Track+ is battery life which, frankly, could be a sticking point for many. Libratone claims the headphones offer “up to 8 hours” of battery life per charge, which is respectable for their class. Yet, while that may be accurate under the right circumstances, we clocked significantly less time with full-bore noise canceling engaged in our in-ear test, measuring around 5 to 6 hours at best — even less than the cheaper BT 150’s 6.5 hours. The Track+’s sleep mode was too smart for us in our second test, shutting the earbuds down a few times when we tried to cheat by testing them on our desk instead of in our ears. Suffice it to say, though, the headphones died a little faster than claimed. They do charge fully in just an hour, but the limitation means the Track+ could well leave you high and dry on overseas flights.

Then again, those looking for top-notch noise cancelling in earbud-form will likely want to go to the source anyway and purchase the Bose QC20. We’ve yet to find earbuds that match their cancellation skills, and though they’re wired, they also boast an impressive 15-16 hours of playback time per charge.

As we touched upon at the intro, Libratone has smoothed out its sound design for the Track+ to line up with the headphones’ smooth aesthetics. While there’s still a bit of that snappy touch to the upper midrange and treble, this is a warmer, more balanced sound than we’ve heard from the brand before, highlighted by ruddy and pronounced bass, good stereo separation, and some pleasant bits of instrumental definition. The Track+ won’t barrel you over with hi-fi audio, but we found plenty to like about their accessible sound signature.

The ambient sound tech is fun to play with, and it works pretty well out on the street.

That said, it’s not all gravy here, and discerning listeners will likely find themselves wanting a bit more from the Track+ at times, especially when it comes to reproducing organic instruments like percussion elements and acoustic strings. The headphones provide a somewhat synthetic touch to the upper midrange, which favors the attacks of stick hits and string clicks over the meaty resonance of the tones they produce. This can be a fun effect for electronic instruments and overdriven guitar, as the Track+ tend to lean into those crunchier tones for a more visceral feel, but it can leave other instruments, including vocals, sounding less than natural.

We also wished for a bit more dynamic expression and clarity in the overall sound signal. When compared directly with the BT 150 NC, Phiaton’s model offered more intimacy and closeness to the sound, especially in the midrange. We’re not sure if the Track+ utilize any Bluetooth enhancement codecs like aptX (we’re still waiting on confirmation there) but if so we couldn’t hear it. That’s not to say the sound is outright opaque or lacking in detail, but the BT 150 NC headphones edge them out when it comes to definition, and at a lower price point.

The highlight for our ears is the Track+’s lower-frequency response, which adds some real oomph without getting in the way of the rest of the sound — no small feat. There are some enticing layers of smooth and juicy warmth in the lower mids, while bass — especially the midbass — is full and punchy without getting sloppy.

Overall, while you won’t be floating on cloud 9 with each song you audition, the Track+ get the job done with warmth and detail.

Libratone offers a one-year warranty on all U.S. purchases, more information about which can be found on the company website.

Libratone’s Track+ are a stylish pair of wireless earbuds with solid sound and features galore, but battery life may be a concern for frequent travelers and heavy listeners.

Our favorite alternative should be no surprise, as we’ve returned to the Phiaton BT 150 NC throughout this review. While we prefer the Track+ from a style point, if style and ambient sound filtering is of less concern, the BT 150 NC offer improved sound and better battery life at a $50 savings.

Those looking for better noise cancelling may also want to check out Bose’s QC20 for $50 more, but in most cases we’d steer clear of the wireless version, the QC30, unless you’ve got an extra Benjamin to set free.

The Track+ are built to last thanks to solid construction and weatherproofing, and on the digital side, Libratone touts continued firmware updates delivered seamlessly via the app.

If you think 5-8 hours (depending on noise cancellation) will do the trick, we’d say go for it. We fell in love with the Track+’s sleek styling and intuitive design, but their battery playtime can put you in a tough spot if you’re not conscientious. If you need a bit more to burn, we’d point you toward the other options mentioned above.