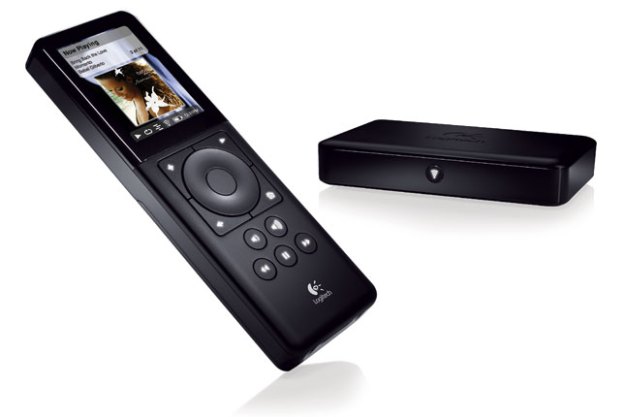 “Logitech's Squeezebox Duet justifies its price tag with outstanding flexibility and ease of use, despite potentially tricky setup and missing DRM support.”

Slapping your iPod into a music dock works just fine for serving up tunes in the kitchen, garage or bedroom, but when you want to rattle your house, break windows and agitate the neighbors… or just listen with higher fidelity, you’ll need more firepower than an all-in-one solution can provide. Like a dedicated, network-connected media streamer mated with a home theater system. Logitech’s top-of-the-line Squeezebox Duet serves as the company’s most robust streaming solution ever, using Wi-Fi to pump audio from your PC or the Internet directly to your existing home stereo, and doing it with a level of ease and sophistication that it rivals solutions twice as expensive.

As the name suggests, the Squeezebox Duet comes with two primary components: a router-sized receiver that attaches directly to your home theater system, and a slim handheld remote with a 2.4-inch LCD screen for control. To be clear, you’ll need more than just what comes in the box: Your computer acts as the third component, serving up your personal music library, and your wireless access point provides the invisible glue that binds it all together, as well as acting as a gateway to the Internet.

The receiver can tap into your home network either via a hard Ethernet connection, or built-in Wi-Fi. Although it supports only 802.11b/g, 802.11n would largely be unnecessary for streaming audio, anyway (it’s high-def video that really takes advantage of the newfound bandwidth). The receiver has both stereo RCA jacks for analog output, and two digital outputs: optical and coaxial. Though finicky audiophiles might opt for their own digital audio converters (DACs), Logitech hasn’t skimped on the internal option, either. The Duet uses a 24-bit Wolfson DAC, the same type of hardware you might find buried in many high-end CD players, like Arcam’s $2,299 FMJ CD37.

The Duet can natively play MP3, AAC, WMA, Ogg, FLAC, Apple Lossless, WMA Lossless, and WAV music files. Support for all the most popular lossless formats means audiophiles will be able to stream their perfectly preserved collections without losing so much as a bit in the process. However, because the Duet doesn’t support DRM, fans of the iTunes store will be left out cold when their purchases refuse to play.

Above and beyond playing local files from elsewhere on your network, apps allow the Duet to tap streaming Internet radio from Last.fm, Pandora, Slacker, subscription on-demand tunes from Napster and Rhapsody, and thousands of independent stations through ShoutCast and Live365, plus scores of others. You can view the full list of supported sites at Logitech’s App Gallery.

Like all Squeezebox hardware, both parts of the the Duet come doused in a matte black finish that fits in unobtrusively in with most other home theater components. In fact, the receiver could all but disappear in an audio cabinet crowded with more prominent components. It features only one button, a small circle with a Wi-Fi icon that puts it into connect mode and changes color to indicate status.

The remote offers quite a few more controls, but still manages to look relatively uncluttered beside most modern TV remotes. The controls all cluster around an iPod-style scroll wheel. Like the earliest of Apple’s cult MP3 players, you can physically turn the wheel and click the center to make selections. Around it, there are shortcuts to take you home, back, play, and an “add” button for songs to a current playlist. Further below, the remote offers dedicated volume up and down buttons, along with those home theater staples: rewind, fast forward, and play. Disappointingly for a $400 system, none of the buttons are backlit, but they’re sparse enough that you’ll be able to memorize them in time.

The remote’s charging dock, which has a bright chrome base, might be the flashiest part of the whole ensemble. Fortunately, it feels as sturdy as it looks, and the weight from the solid metal prevents it from skidding around on tabletops or bouncing around when you drop the remote in. Both it and the receiver draw power from separate wall transformers.

Setup for the Duet is – in theory – dead simple. Ideally, you simply plug the receiver into your stereo system and a power outlet, fire up the remote after charging it, enter your Wi-Fi details, press the button on the box to put it into mating mode, and connect. After installing Squeezebox Server on a network-connected PC, you should have access to your local library of music.

As the “in theory” above foreshadows, it didn’t go as planned for us. Our Squeezebox repeatedly told us it couldn’t connect to our office Wi-Fi network. After reentering passwords, moving it around for better reception, and even installing new firmware by downloading it into an SD card and putting it in the remote, we were ready to tear our hair out. In the end, we only got it working by hardwiring it and putting it into “hybrid mode.” While our particular predicament was quite dire, most user reports seem to indicate our situation is quite rare. Even so, be aware that hooking the Duet into more than a simple home network – like a work network or one at a college campus – may cause issues.

The real frustration here, besides the fact that it couldn’t “just work,” turned out to be the online support documents you typically rely on when things go wrong. Logitech has overhauled the Squeezebox’s firmware and software so much since its launch (the desktop software doesn’t even have the same name anymore) that many of the online tutorials and walkthroughs Logitech supplies online are completely outdated, referring to features that don’t even exist anymore. For instance, the included manual (and the one available online, which has not been updated) both refer to a four-digit PIN code you’ll need to enter before your Squeezebox will play nice with the included software and online features. Logitech has completed axed that feature. Although we have no doubt that eliminating one more PIN code in device setup was a sound move, Logitech needs to comb through its documents to remove confusing references to extinct features, menus and software bundles, which can lead to wild goose chases while troubleshooting.

After ironing out initial quirks with connectivity, the Duet quickly redeems itself in day-to-day use.

We have to commend Logitech’s choice to put the screen directly on the remote, which eliminates the squinting sessions you’ll have with players that defy all logic and put the screen directly on the base station, like Philips’ Streamium NP2500. Although a touch screen, like on Sonos’ Controller 200, is in many ways more intuitive, anyone who has ever used an iPod will already be familiar with the process of flicking through menus on the Duet’s wheel, and using the center button to select. We only missed the touch screen when it came to entering text, which becomes an exercise in patience with the scroll wheel. Fortunately, aside from searches and entering usernames and passwords, you won’t have to do it much.

The Duet remote greets you with a short list of options on the home screen: My Music, My Apps, App Gallery, Favorites, Turn Off Squeezebox, Choose Player, Search and Settings. Each one is as straightforward as it seems, and dedicated buttons for functions like adding to a playlist and going backwards through the menus mean there’s really no secret “moves” to learn that aren’t clearly labeled.

There’s an App for That

The interface for browsing local music stored on network computers works as well as you would expect – Logitech has had plenty of time to get it down. The unexpected ace in the hole turns out to be Logitech’s App Gallery, which adds a robust – and continually expanding – set of features. After finding an app you want in the neatly organized library, you can download and run it in a manner of seconds. Between Pandora, Slacker, Shoutcast, Last.fm and a neat Squeezebox-specific apps that provides looping nature sounds, you could probably fill several lifetimes with music and entertainment. The amount of Internet-based content the Duet can dish up has few rivals short of Sonos, which gets a leg up for supporting more obscure services like eMusic, Zune Marketplace, and more importantly, iTunes. Logitech does leverage its open-ended “app” architecture to add some decidedly non-musical tools, but they don’t offer much utility. Looking at Flickr galleries on the 2.4-inch remote LCD, for instance, was novel for about 30 seconds, and browsing your Facebook news feed the same way seems absolutely inane.

Every app will ask if you want to add a shortcut to the home screen when you install it. While these can speed up access to your most frequently used apps, too many can clutter up the otherwise pristine menus. Unfortunately, we couldn’t find a way to remove them, short of uninstalling the actual app then reinstalling it and choosing not to add a shortcut, which seems like far too much work for what should be a two-second operation.

For the spin-wheel-averse, Logitech also makes it possible to select tunes a number of other ways. Any computer on the same network as the Squeezebox can open Squeezebox Server and begin controlling it instantly through Web Control, and for computers that don’t have the software installed, or don’t even share the same network, you can log on through MySqueezebox.com and do the same thing. Unfortunately, the latter MySqueezebox.com remote control is a shadow of the one you get with Squeezebox Server, inexplicably lacking the ability to access a number of vital options including “My Music.” Install the Squeezebox Server software, though, and you’ll be rewarded with a superb interface that just as easy to figure out as the real remote.

Unlike Sonos, Logitech doesn’t offer a free iPhone app to control music from your phone, but you can snag a third-party one like iPeng or SqueeMote for $9.99 or $7.99, respectively.

Like attempting to install a home Jacuzzi, hooking up the Squeezebox Duet caused us to curse, sweat and throw our hands up in the air out of the box, but very quickly made amends as soon as it started working. To music lovers, reclining on the couch with a never-ending supply of tunes at their fingertips might actually be an even more relaxing than sitting in a stifling hot, over-chlorinated tub anyway. While Sonos technically delivers more access to online music services, Logitech has all the major bases covered, and the price difference more than make up for the few it’s missing. The ZoneBridge, ZonePlayer 90 and Controller 200 needed to get the same functionality would cost you $800 from Sonos, twice the cost of the Duet. Although cheaper solutions like the $230 Streamium NP2500 can be tempting, the ease of use and extra utility of the Squeezebox system are well worth the extra expense.