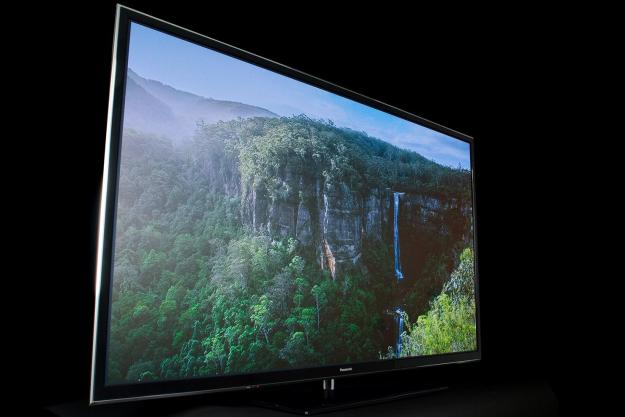 “There is no other TV on this planet that can get you so close to videophile nirvana for so little investment than Panasonic’s ST60 series plasma.”

Panasonic ST60 Series information: This review is based on our hands-on experience with the 65-inch TC-P65ST60 TV. However, our observations also apply to the 50-inch TC-P50ST60, 55-inch TC-P55ST60, and the 60-inch TC-P60ST60. According to Panasonic, the four sets differ only in dimension and weight and offer identical features and performance.

Over the past few months, we’ve enjoyed living with the best TV’s 2013 has to offer. We started with Samsung’s spectacular F8500 plasma, followed that up with a double dip into Panasonic’s amazing ZT60 and VT60 plasmas, then tackled LG and Samsung’s flagship LED TV’s, the LA8600 and F8000.

The last must-see TV on our list this year was the Panasonic ST60 series. Given how good the step-up ZT60 and VT60 models were, and that the ST60 saves cash mostly by trimming all the stuff we don’t really want anyway, all it had to do was not screw something up royally and it was bound to earn our recognition as the best value in TV for 2013.

Not only did the ST60 not screw anything up, it exceeded our expectations. Read on to find out why we think the Panasonic ST60 series television is the must-buy TV for this year.

We admit we’ve fallen prey to the allure of the nearly-non-existent bezel commonly found on flagship LED/LCD televisions. It’s so incredibly futuristic, isn’t it? It’s funny to think that it wasn’t all that long ago when televisions came in consoles – huge wooden boxes, for crying out loud – the very antithesis to what is accepted as the pinnacle of modern TV design.

But if you ask us, the whole bezel-free thing is best left for OLED televisions, which can pull off the “floating window” appearance without also coming with the poor black levels, uneven picture and backlight blooming that plagues even the best LED backlit LCD televisions. You can keep your LED TVs; we’ll stick with plasma for as long as it takes for OLED to come down out of the pricing stratosphere, thank you very much.

Which brings us around to the ST60 and its definitely-not-so-tiny-you-can’t-see-it bezel: As modern TVs go, we suppose you could argue that the ST60’s 1-inch bezel is actually on the bigger side. But you know, not once during the three weeks that we lived with this TV did anyone ever look at it and say, “you know…that bezel is a little larger than I expected it to be.” And do you know why nobody ever said that? Because when this TV is turned on, its picture is so amazing it sucks in your attention with the power of a two-story tall Dyson cyclone vacuum. There’s no time for looking at the edge of this TV…trust us on this one.

If you did get around to looking at the bezel, though, you’d notice that it is trimmed with a chromed plastic strip (which we kind of wish was acrylic instead) and you might notice that the TV’s profile is remarkably thin for a plasma; about 2-inches total on average. And working your way down, you’d likely see that the ST60 comes with a glossy plastic stand which, while stable, doesn’t allow the TV to swivel.

In the box with the TV stand and hardware, you can expect to find two pair of Panasonic’s active 3D glasses, a standard remote control with batteries and a manual. No breakout cables for legacy connections are included because they aren’t necessary; Panasonic has reverted back to placing a component/composite connection bay on the back of the TV.

Let’s first go over some of the features this TV does not have. It does not have a built-in camera (though you could add one for Skype video calls if you’d like) nor does it allow gesture or voice recognition. You also won’t get a touchpad-style remote with this TV; it comes with your standard black wand.

Lest you think those are downsides, we’ve gotta tell you we’re grateful for all of those exclusions because those kind of features tend to tack a lot onto the price tag, but not so much onto the user experience.

Find something on YouTube you want to share with the family? Just “throw” it at the TV and it will start playing.

This is a Smart TV, though, so you get access to most of the important video on demand (VOD) apps available, including Netflix, Hulu, Amazon and Vudu; but, you won’t find any cable service apps such as TWC or Verizon and you don’t get access to specialty VOD services such as HBO Go. Also, while the Smart TV interface is functional, it isn’t exactly engaging. And we never did get it to recognize our media server. At the end of the day, we recommend getting a one of Roku’s boxes instead. They are all more robust and easier to use, though we will admit Panasonic’s Netflix app is several steps ahead of Roku’s current version.

We do like that we were able to “swipe” content from our smartphone to the ST60. That’s one of the few Smart TV features we’ve found ourselves using more often these days. Find something on YouTube you want to share with the family? Just “throw” it at the TV and it will start playing. It’s a little thing, but it’s become practical.

Enough with all the Smart TV stuff. This TV is here to rock an awesome picture, and it comes with all the tools to enable that. You’ll get three HDMI inputs with two USB inputs and an SD card slot. There’s an Ethernet connection on the back of the TV, but it’s outfitted with a Wi-Fi adapter for a wireless connection if that is preferred.

As for picture options, the ST60 offers more than enough deep settings to get you in trouble. We don’t think most folks buying a TV at this level are going to be interested in inviting an ISF calibrator over for dinner and a quick calibration, but if they do, we think the imaging pro will have no problem getting a compliant picture out of this set. With that said, the TV’s Cinema function is pretty good. It’s not as good as the VT60 and ZT60’s THX mode, but it will get you close.

Finally, there’s the remote. All of the necessary buttons are there, but we feel like Panasonic got all the numerals and directional arrows in the right place, then threw the rest of the buttons up in the air and just let them stick where they landed. Seriously, the placement of some of these keys is bewildering. Nextflix is a tiny red key at the bottom of the remote next to a question mark. The menu button – also tiny – is positioned just below the power button. Meanwhile the 3D button, Closed Captioning button and SAP button all take up the top row.

Maybe the odd button placement wouldn’t be such a big deal, except the remote is not backlit. If you’ve read any of our TV reviews in the past, you know we consider any TV over $1000 without a backlit remote is just an insult. Why, Panasonic? Why?

As long as we’re questioning Panasonic’s decision-making skills, let’s talk about something we (regrettably) glazed over in our ZT60 and VT60 reviews: Banner ads.

What in the name of Caesar’s ghost was Panasonic thinking when it put banner ads all over its Smart TV menu and volume control graphic? If it was trying to look like a sell-out or maybe just desperate, then mission: accomplished.

Fortunately, Panasonic allows you to remove the ads. Unfortunately, it’s not a readily apparent option within the menu. So, let us help you out right here:

How to disable ads on a Panasonic Viera television:

Some may also take issue with Panasonic’s whole “home screen” feature, which provides users a customizable layout that can be filled with specific apps and widgets. By default, the home screen of choice will launch when the TV is powered on. We kind of like the feature, but others will not. To make sure the TV launches with in full-screen TV mode, just click on the ‘Home’ button, click ‘Home’ again to choose the home screen, then scroll left until you get to full-screen TV. Hit enter and you’re done. The TV will now default to full screen TV each time you power it up.

Outside of those changes, you’ll probably want to turn off motion smoothing. As we said before, we suggest Cinema for the default picture mode. It is plenty bright enough to compete with sunlight pouring into your home, and it provides solid color, brightness and contrast settings. Just select Cinema in the picture mode section, then scroll down to the second page where you’ll see ‘Motion Smoothing’ and turn it off. Remember that you’ll need to select a picture mode for each input on the television.

For all the griping we’ve done about so many little things, you might be wondering why it is we so enthusiastically recommended this TV at the top of our review. The reason, dear readers, is because the picture quality on this TV is outstanding. While the step-up ZT60 and VT60 TV’s offer some subtle refinements that enable marginally better black levels and perhaps slightly better bright-room performance, the ST60 gets so incredibly close, it actually makes those more expensive models a harder sell.

…its picture is so amazing it sucks in your attention with the power of a two-story tall Dyson cyclone vacuum.

We could go on and on (and we just might) about how deep the ST60’s black levels are; how surprisingly bright the picture can be (one of LED’s last remaining advantages is officially gone, folks); how rich and accurate the color performance is and how impressive shadow details are; but we don’t think that would tell the full story when it comes to this TV.

As we mentioned before, we’ve tested four of the best-performing TVs that were made this year. And although they were all excellent in their way, we think the ST60 has them all beat. It comes down to the ST60’s unprecedented price-to-performance ratio. Simply put, there is no other TV on this planet that can get you so close to videophile nirvana for so little investment.

We enjoyed every moment of the three weeks the ST60 sat in our family room. Not once did we catch ourselves balking at edge light bleeding or furrowing our brow at any oversaturated colors. We never got frustrated because some voice recommendation software would suddenly interrupt our show for some unexplained reason, and there was no point at which we got irked at some animated on-screen graphic. In fact, aside from the fact that the ST60’son-board sound was so poor (a fact that plagues most TV’s) we lived with this TV in perfect harmony for its entire stay. And that’s the way it should be.

Go buy this TV. If you want bragging rights, tell your friends that you just bought one of the best-rated televisions ever made. And if they ask why it was rated so well, you can tell them it’s because it was made for smart people who are keen to the laws of diminishing returns and know the best deal out there when they see it…and also read Digital Trends religiously (wink, wink).

As a reviewer, sometimes it’s easy to get caught up in the minutiae in an effort to make a determination about what makes one product better enough. In this case, the Panasonic ST60 made our decision easy. Let’s put it this way: If you’re looking for an attractive, reasonably-priced TV with the best possible picture quality and the least gimmicky stuff getting in the way, the ST60 is the best pick out there. Enjoy.