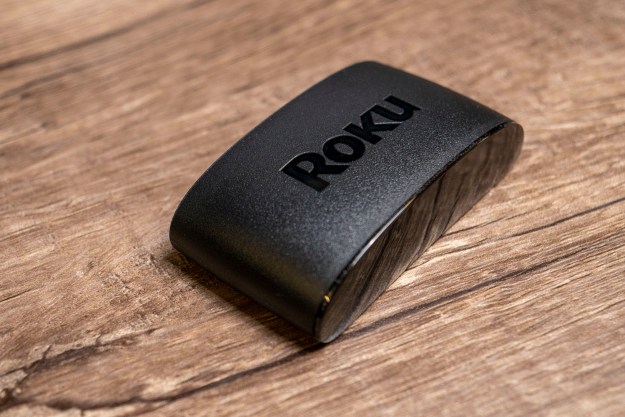 “With everything you need, and nothing more, the new Roku Express is a bargain of a streamer.”

There’s no question that if you want the very best movie, TV, and sports streaming experience, you need a media streamer that can handle Ultra HD 4K, HDR (preferably with Dolby Vision too), and Dolby Atmos. Not everyone needs such an elaborately equipped device or has the budget to pay for one, however, which is where Roku’s newly-refreshed Express comes in. At just $30, it’s the least expensive Roku device and one of the cheapest media streamers, period. But is it $30 well spent? (What’s a Roku, you ask? Here’s everything you need to know.)

When Roku introduced the first-generation Express, it marked a significant change to the company’s designs. For the first time, a Roku didn’t look like a rounded-square set-top-box or a stick. The idea was to reduce a Roku to just its bare essentials, helping it to disappear almost entirely without taking the additional step of placing it behind a TV. Doing so would require a more expensive RF remote, which would interfere with the second goal of keeping the price as low as possible.

The curvy design not only makes it look smaller, but it also helps the Express blend a bit better into your TV’s base.

The result was a small, nondescript box that could be affixed to the bottom of a TV with an adhesive strip if you so desired. With only an HDMI port and MicroUSB input for powering the streamer, it was minimalist to the core.

The new Roku Express takes this approach further. It’s 10% smaller than the previous version, according to Roku, and it’s now got a pleasingly rounded shape. This curvy design not only makes it look smaller, but it also helps the tiny streamer blend in with the base of your TV, if that’s where you choose to place it.

In fact, the Roku Express is now so small and light that if you don’t use the included adhesive strip to secure it to your TV or another surface, the weight and resistance of the HDMI and power cables make it tricky to keep the streamer put. With an RF remote, this would be a aesthetic concern, but the Express’ IR remote needs a clean line-of-sight back to the streamer, so funky angles are not a good idea.

Of course, you could just go ahead and use the adhesive strip. That’s what it’s there for. But it’s a one-time use strip, which means that if you want to take the Express with you — say to a hotel — you’ll have to remove it and buy a new one from Roku.

Included in the box are an HDMI cable, a MicroUSB cable, a USB power adapter, and the Roku remote.

You can power the Express using the included adapter, or for an even simpler setup, you can use an available USB port on your TV. Thanks to improvements in the latest Roku OS 9.2, the actual on-screen setup takes only a few minutes — even less if you already have a Roku account.

I’m a big fan of the introductory video that plays at the end of the process. In less than a minute you get a full tour of the Express’ key features so you’re ready to roll, no manual needed. If you need a refresher on specific features, the new Tips & Tricks channel has you covered with many more instructional videos.

No frills, but lots of extras

Unlike some of Roku’s other streamers, the included remote is very basic. There’s no voice control, no headphone jack, no volume control, and no customizable buttons. These fancy extras — all present on the $100 Roku Ultra — would simply add cost, so they’re out.

It’s compatible with Alexa and Google Assistant-powered devices, which opens up a whole world of voice-based options.

This is not to say you can’t spruce up the Roku Express’ bare-bones experience. Using the free Roku app for iOS and Android, you can add private listening via your phone’s headphone jack, use the mic for voice searches, and it also acts as a secondary remote. You can even use it to cast content like music, photos, and videos from your phone to your TV.

Plus, the Express is compatible with Alexa and Google Assistant-powered devices, which opens up a whole world of voice-based options if you’re part of one of those ecosystems.

While it’s true that you do get some extra features by spending more on a box like the Roku Ultra, most of the best parts of the Roku experience are baked into Roku’s software. So whether you spend $30 or $100, you get to use the mic (on the app) to ask, “Who said, ‘I’ll be back’?” and see a list of matching media titles. Starting with The Terminator, naturally.

There’s also the new Roku Zones, which give you a themed spotlight for categories like Action, Drama, Kids & Family, Mysteries, and many more. They appear when you do a search (if they’re a match for your query) or you can find them all by searching for “Zones.”

Finding free content to watch on Roku used to be a chore, requiring you to know which channels had free content, or hoping that a movie or show you searched for had a free viewing option. Now, with the addition of the Featured Free menu option, you can pull up a list of available free content sorted by genre. Selecting a title will give you an info page along with the ability to jump into the appropriate channel and start watching. If you don’t already have that channel, you’ll be prompted to add it. It’s a small addition, but it makes finding something to watch totally effortless.

The Express is only a $30 streamer, so I didn’t have high expectations for the tiny box’s performance. But it surprised me. While not as lightning-quick as the Ultra, the Express never leaves you hanging. Screen changes, channel launches, and new streams all appear rapidly. If you’ve been using an older Roku, like a first-gen Streaming Stick or perhaps a Roku 3, you’ll see an immediate difference.

The new Roku Express might lack 4K, HDR, Dolby Atmos and some of the neat features you’ll find on Roku’s other streamers, but for the rock-bottom price of $30, we don’t think you’ll mind at all. It’s got everything you need to enjoy all of the best streaming entertainment that’s out there, in a tiny little box that all but disappears.

With speedy performance and a surprising amount of extra features enabled by the free Roku app, we’d say the Roku Express is worth every penny.

Not for the price. At $30, the Roku Express is easily the least expensive streamer you can buy. If you wanted to add voice and volume remote capabilities, you could spend $10 more for an Amazon Fire TV Stick, or $20 more for the Roku Streaming Stick.

Still not sure what to buy? Check out our round-up of our favorite streaming devices.

Roku devices are very well built and the new Express appears to be no exception. With replaceable batteries in the remote, there’s not a whole lot that can go wrong. And with regular software updates from Roku, you may very well decide to upgrade to a fancier device long before the Express stops working.

Absolutely. If you don’t need 4K resolution or HDR, the Roku Express is a bargain for what it offers.

Topics
NAD’s CS1 adds wireless streaming music to any audio system
The best Blu-ray players for 2023
LG’s latest portable CineBeam Projector now available for $600
The best home theater projectors you can buy in 2023
Super Bowl 2023 halftime show: who’s performing?
The best indoor TV antennas for 2023
The best waterproof Bluetooth speakers for 2023
The best VPN for streaming for 2023
Marshall’s latest Bluetooth speaker has four drivers for 360 sound
Showtime is being merged into Paramount+
Sling is now 50% off — stream live sports without cable
Klipsch follows the success of The Fives with The Sevens and Nines powered speakers
Everything leaving Hulu in February 2023