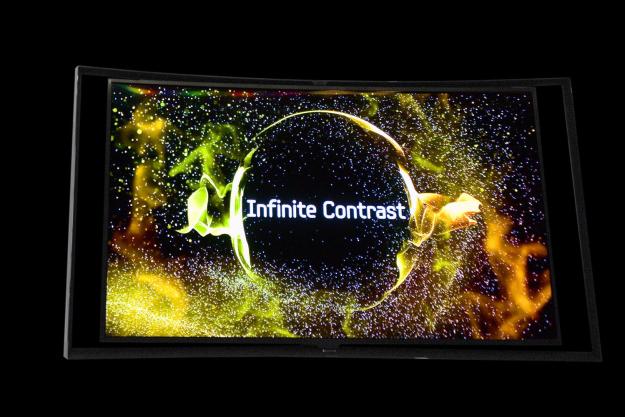 “This is the best-looking TV we’ve ever seen. Ever.”

When Samsung announced its 55-inch OLED TV was going on sale in the U.S. for about $9,000, owning an OLED in 2013 went from a wildly lavish proposition to a … well, a slightly less wild one. Nine grand is still a lot of cash, especially considering a much larger Panasonic ZT60 or Samsung F8500 plasma (both of which offer unprecedented performance in their class) can be had for less than $4,000.

Samsung’s KN55S9C makes the best case yet for spending more than $5,000 on a television.

But, we’ve got to admit: Samsung’s KN55S9C makes the best case yet for spending more than $5,000 on a television. For cash-flush early adopters and those few videophiles who are willing to take out a second mortgage on their house to own “the best,” Samsung just unleashed the biggest breakthrough in TV technology since the flat panel itself. If you asked us to choose between a 4K/Ultra HD TV in any size and a 55-inch OLED, we wouldn’t even let you finish asking the question before blurting out: “OLED!”

We recently locked ourselves in a room with Samsung’s 55-inch OLED TV at its quality assurance labs in New Jersey and put the next-gen display through the wringer in an attempt to expose any flaws or quirks which might curb our enthusiasm. Here’s what we found out.

The KN55S9C comes already mounted in what Samsung calls its “Timeless Arena” frame. To finish assembly, you just need to attach a slope-shaped stand piece to the frame’s back for stability. In the box with the TV, we found Samsung’s breakout input box and “One Connect” cable with a bundle of accessories, including two pairs of active-shutter 3D glasses with built-in earbuds, a Samsung Smart Touch remote, batteries for the remote, a power cable, IR extender cable, a user manual and a microfiber cleaning cloth.

The TV weighs in at 68.1 pounds and measures 58.8 inches wide, 30.6 tall and 14.2 deep – with the stand taken into account. However, the depth of the TV as mounted in its frame is about 5.3 inches. The display itself appeared to be about a ½-inch thick, though we weren’t able to measure during our limited review time.

We have mixed feelings about the “Timeless Arena” design. On one hand, the frame affords the TV a place for speakers and camera, keeping this bulk away from an otherwise slim panel and improving onboard sound. On the other hand, the frame is a real space hog. It adds a good six or seven inches in total width to the television and in a way, it takes away from the thinness of the TV panel itself, which is a major selling point for OLED technology (outside of its performance, of course). Also, we think the design, while aesthetically distinct, might not be everyone’s cup of tea. Then again, when has anything distinct or unique ever been met with universal praise?

As you’d expect, Samsung injected everything it’s got into this TV. Quad-core processor, Samsung’s Smart TV platform, gesture control, voice recognition, smart touch remote – it’s all there. We will not be covering these features in depth for this review, but if you’d like to learn more, check out our review of the Samsung F8500 plasma, where we dive into those features and tender our opinion on them.

Samsung just unleashed the biggest breakthrough in TV technology since the flat panel itself.

For this review, we’ll stay focused on some of the more unique attributes. The first of which would have to be Samsung’s breakout input box and “one connect” cable. It allows you to plug all your devices into this one little box, and then run a single cable up to the TV. Who wants to run multiple cables up to the TV when the components are typically kept together in one place, well removed from the TV? Seriously, where has this thing been for the last decade? Now, if only this TV could be wall-mounted. Then it would be a real advantage, this box.

The input box has space for four HDMI inputs, two USB inputs, an Ethernet jack, one component input, two composite/AV inputs (shared with the component – it’s a hybrid) an RF in jack for terrestrial cable/over-the-air TV, one digital-optical audio out, a 1/8-inch mini audio out, an IR output and an RS232 out for AV control.

The TV is what Samsung calls “evolution ready.” That is to say, there is a slot for Samsung’s Smart Evolution kit, so that as Samsung advances its software platform and processing capabilities, the TV can be essentially upgraded and modernized by installing this kit (which must be purchased at the time).

Another notable feature is Samsung’s Multi View, which allows two people to watch and listen to completely different programs with the use of Samsung’s active 3D glasses with built-in earbuds. No resolution is sacrificed for this, the images are presented alternatively, and the 3D glasses are synced with the TV to show one program or the other. Audio is delivered wirelessly through earbuds that are integrated into the glasses. We tried the feature out and it worked pretty well. Our only complaint is that the earbuds don’t come with different size tips, so some folks with particularly large or small ear canals will need to Macgyver a solution or just do without.

Oh, let’s just cut to the point, shall we?

This is the best-looking TV we’ve ever seen. Ever.

There…we said it. Now we’re going to back it up, because we’re not just getting all excited about some cute ‘n curvy new kid on the playground. This TV actually does things others before it haven’t been able to do. And it does them very, very well.

The black levels, to start, are as black as black gets, as far as the human eye is able to discern. To quote Spinal Tap, looking at the KN55S9C frequently raises the question, “How much more black could this be? And the answer is none. None more black.”

We threw a 0 IRE pattern (that’s a totally black test pattern for you non-video nerds out there) at the KN55S9C and measured its output with a Konica-Minolta LS-100 luminance meter. The result was 0. As in, no light. Granted, this not the end-all be-all of light meters, but Samsung’s testing gurus informed us they had used more expensive equipment and got to 5 decimal spaces with no reading before they called it good. And at that level, you know you have something special.

As for brightness, the curved OLED did very well. With a 100 IRE window pattern and the TV at its brightest settings (and the set’s “Clear Motion” feature turned off), we measured well north of 80 foot-lamberts, which is, like, insanely bright.

That all amounts to stunning contrast, yes, but color was equally impressive. This TV is capable of a wider color space than any other TV we’re aware of, and it shows in normal viewing. With the set’s default color settings in the Cinema preset, colors were well-saturated, rich, and accurate looking. The orange glow that pervades the movie Skyfall never looked so good, and reds – oh, the reds – were outstanding. And this is with default settings. No doubt an ISF-certified calibrator (we know of two who reviewed this set on the same day we did and may publish their settings) could make it even better.

Blu-ray discs just looked pristine. The images were clean, but not sterile; warm, but not over-cooked. It all just seemed so damn perfect, we began to wonder if we would surface any quirks. Finally, we did.

Motion resolution on this set without any processing engaged looks like that of a 60Hz TV. This didn’t come as a surprise, as we experienced the same thing with LG’s 55EA9800 curved OLED model. However Samsung does provide a special motion-smoothing circuit called “Auto Motion Plus” with individual sliders that allow users to increase or decrease the intensity blur and de-judder processing. With the right setting, you can get smoother motion through motion interpolation without necessarily introducing the dreaded “soap opera effect.” Part of Auto Motion Plus is an option for “Clear Motion,” which actually inserts black frames in between images to prevent blur as fast-moving objects move across the screen. Those extra black frames, however, reduce the TV’s brightness. In a dark or dim room, this is no big deal. In a super-bright room, it’s not ideal. It’s not a deal breaker, either. Most folks who care won’t be watching film in a bright-ass room on a $9,000 TV. Just doesn’t seem likely.

The only other issue we noticed is a byproduct of an anti-glare coating that Samsung puts on the KN55S9C’s screen. While the coating does a decent job of minimizing some glare and reflections (it can’t be eliminated entirely) it also casts a bluish-purple hue once you move off-axis to the extreme.

What’s with the curve?

We’ll go into this in a separate article later, but for now we’ll reiterate what we said in our review of LG’s curved OLED: It doesn’t add anything to the viewing experience, but we don’t feel it takes anything away from it, either. There are reasons both manufacturers went with a curved model, and we think you’ll be surprised by what they have to say. For now, we want to state that the curve has no bearing on our rating, since it is the only variant of the OLED TV available in the US and will stay that way for about a year.

As picture quality goes, Samsung’s KN55S9C offers what we’ve long considered to be the holy grail of TV performance. Were it not for just a couple of quirks, we’d say this TV was just about perfect. But, price is a factor of consideration for our reviews, and even though this curved OLED is available for $6,000 less than we thought it was going to be, it is still expensive, and it’s price-to-performance ratio doesn’t exactly scream “value.” Samsung’s F8500 and Panasonic’s ZT60 and VT60 are better deals overall, with picture performance that will more than blow away the average viewer.

With that said, we’re just excited OLED is here and is looking this good. It gets us excited for what the future holds and dreaming about how much better TV could get.

[Update: This review was edited to reflect the correct nomenclature for motion smoothing technology and to clarify under which conditions the brightest light measurements were attained]