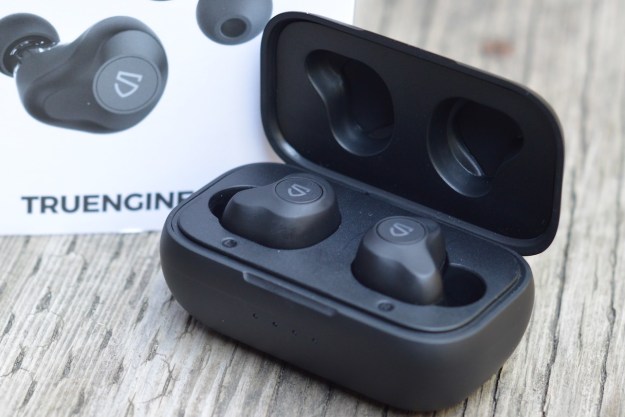 “You won't mind that they lack ANC when you hear their sound and see their price.”

True wireless earbuds really are a game-changer in personal audio. The complete absence of wires plus a compact and (usually) pocketable size and shape make them the ideal smartphone companion for your daily commute, your workout, or even a lengthy flight.

But at prices that routinely exceed $100, a decent set of affordable true wireless earbuds can be hard to find.

So when I ran across The SoundPeats Truengine SE, which have suggested price of $50, but retail for just $40 on Amazon, I was intrigued. Can such a cheap set of true wireless earbuds actually be worth owning?

Time to find out…

The Truengine SE, like most , ship with a charging case, a USB cable for charging, and three sizes of silicone ear tips.

The box itself is as basic as it gets: A small black cardboard container with a color-printed cardboard sleeve. That sounds like a criticism, but it’s not, it’s praise.

Far too many headphones and earbuds come packaged in huge boxes, with lots of plastic both inside and out, designed to make a statement on a shelf in your local big-box store.

Because SoundPeats is essentially an online-only seller, it can do away with all of the extra material, bringing down costs while making a far smaller impact on the planet.

The same minimalist design philosophy extends from the box to the Truengine SE themselves.

The charging case has a smooth, matte black finish, with rounded corners that make it comfortable to hold. It’s about average in size for the true wireless category, which means it’s a bit bulkier than the wonderfully small cases that come with Apple’s $149 AirPods or Jabra’s $180 Elite 75t, but it’s actually more pocketable than the $200 Sony WF-SP800N, or Amazon’s $130 Echo Buds.

The lid and hinge feel well-built, and the internal magnet is strong enough to prevent the lid from opening accidentally.

Right below the lid’s opening groove are four LEDs that indicate the case’s remaining battery capacity and charging state.

It would be nice if it offered wireless charging and USB-C instead of Micro USB, but allowances must be made for the Truengine SE’s price and these features are hardly a necessity.

The earbuds are easily removed from their charging sockets and pop back in place without any need to adjust how they sit.

The Truengine SE are remarkably comfortable.

SoudPeats says the Truengine SE are IPX4 rated. I didn’t test them to see how well they handled some moisture exposure, but I expect they’ll handle a sweaty workout just fine.

The Truengine SE are remarkably comfortable. They possess a similar ergonomic shape to the much more expensive Jabra Elite 75t, which lets them sit securely in your ear without creating any undue pressure points.

The shape of the earbuds is clever. It’s molded into two sections; the black plastic portion contains the battery, electronics, and control button and sits outside of your ear’s concha, while the transparent section — which houses two drivers and the ear tip — has a smaller set of dimensions. I found that this not only made the fit more comfortable and secure, but it also gave me the ability to push the ear tips deeper into my ear canal if I wanted, which I can’t do with most earbud designs.

Once seated, the earbuds won’t budge unless you move them, making them ideal for workouts.

As is usual for me, the factory-installed medium tips were perfectly sized, but I imagine most folks will also be able to get a good fit with the small and large size tips.

There are no fancy touch controls on the Truengine SE, instead (again much like the Elite 75t) they use physical buttons. Whether this was a cost-saving decision or not, it doesn’t matter — in my opinion, well-designed physical buttons are simply better than touch controls, and the Truengine SE’s buttons are very good. They take very little pressure to activate and respond with a satisfying click — no need to wonder if a tap was recognized. The click sound is a bit loud, but not annoyingly so.

You get all of the major commands with just the two buttons: Play/pause, call answer/end, volume up/down, track skip forward/back, and voice assistant access.

There’s no wear sensor, so the Truengine SE can’t pause the music automatically when you pull out an earbud, but they do offer the ability to use either earbud independently. Doing so will prevent volume and track skip features from working accurately, but the important ones (play/pause and call answer/end) are unaffected.

The only quirky aspect of the Truengine SE from a usability point of view is their Bluetooth connection.

You may notice that sometimes the Truengine SE will pair automatically with your phone, and sometimes you need to select them from your list of Bluetooth devices. It’s a quirk that comes from the ability to use each earbud independently. The fix is simple, but it requires you to form a habit: If you remove the same earbud from the case each time (e.g. right, then left) it should automatically pair. Deviate from this pattern and you may have to create the connection manually.

With six hours of playtime between charges, the Truengine SE last longer than the AirPods or AirPods Pro at five hours, but not as long as the Elite 75t at 7.5 hours. In other words, they’re about average for a decent set of buds. The charging case, on the other hand, is a bit better than average, letting you fully recharge the Truengine SE just over three times for a total wire-free time of 27 hours.

If you were willing to use just one bud at a time, you could effectively double this time.

The Truengine SE sound ridiculously good for their price.

It takes 2.5 hours to charge the buds from empty, however, and there’s no quick-charge feature which is my only real criticism of the Truengine SE’s battery performance.

The Truengine SE sound ridiculously good for their price. There are two reasons for this: First, the design of the earbuds allows for excellent noise isolation. You’ve no doubt noted that they don’t offer active noise cancellation (ANC) and they really don’t need to.

When the earbuds were firmly seated, I found that the sound from my under-desk fan was immediately cut in half.

They don’t offer active noise cancellation (ANC) and they really don’t need to.

The second reason is the Truengine SE’s dual dynamic drivers. They do an excellent job of separating low, mid, and high frequencies and produce a very warm and rich sound that neither blows out the bass nor the treble. Instead, there’s an excellent balance of each, which means that a challenging bass track like Hans Zimmer’s Time still packs all of its emotional weight (which it delivers mostly through layering sub-bass, bass, and low-midrange instruments).

Should you expect them to sound like a $180 set of Jabra Elite 75t? No, that would be miraculous indeed. By comparison, the Truengine SE don’t offer the same precision and definition of individual elements, or the same accuracy and depth of soundstage.

As you might expect, the Truengine SE’s call quality is perfectly acceptable. My voice was easy to understand for my callers and for the most part, background sounds were well-managed.

It’s hardly the kind of “HD voice” experience that headphones in the $200-$400 range sometimes boast, but as long as you don’t plan on conducting lengthy business calls from noisy environments, you won’t be on the receiving end of a passive-aggressive text message suggesting that you find a landline.

The only real downside to calling on the Truengine SE is not being able to hear yourself — the earbuds do such a good job at sound isolation, they could really benefit from an ambient passthrough function for real-world conversations and a side-tone feature for phone calls.

It’s also something to keep in mind when wearing them situations where a greater situational awareness is a good thing — like running on city streets.

What can you expect from a $40 set of ? If they are the SoundPeats Truengine SE, the answer is: Good fit, comfort, controls, and sound quality. We think that’s more than enough to recommend them to anyone looking for a budget set of buds.

If you would like to spend even less money, the $30 JLab Go Air are a solid choice, but they don’t fit as well as the Truengine SE, and they don’t sound as good. If you’re comfortable buying refurbished, Amazon sells a “refreshed” Truengine SE for just $23, which makes a gently used set of Truengine SE the best alternative to a new set.

The Truengine SE come with a one-year warranty from SoundPeats, which can be extended to 21 months if you register with the company. From my limited time with the earbuds, they appear to be well-built and should last as long as many other similar products. The only part that might wear out early are the physical buttons, although I haven’t seen any negative customer reviews that complain about this.

Yes, the SoundPeats Truengine SE deliver a lot of value for a very reasonable price.

Topics
NAD’s CS1 adds wireless streaming music to any audio system
Bowers & Wilkins’ wireless earbuds get better battery life and longer range
Amazon adds audio personalization to Echo Buds 2
The best headphones for running in 2023
The best gaming speakers for 2023
The 50 best movies on Netflix right now (January 2023)
This massive OLED TV has a $1,000 price cut at Best Buy today
The best movies on Amazon Prime Video (January 2023)
The best new shows to stream on Netflix, Hulu, HBO, and more
The best TV shows on Amazon Prime right now
Best new movies to stream on Netflix, Hulu, Prime Video, HBO, and more
I replaced my kitchen TV with an Echo Show 15 — and I kinda liked it
The best HDMI cables you can buy in 2023