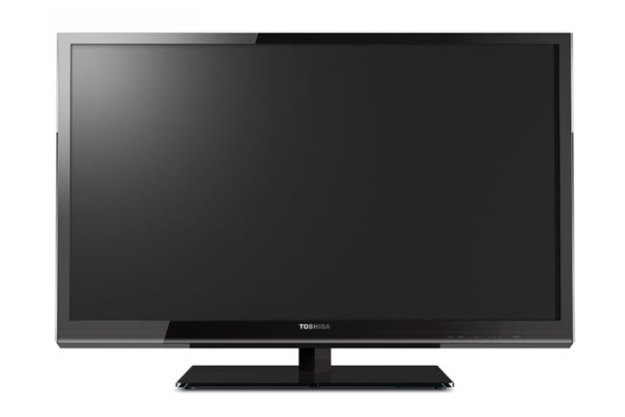 “The Toshiba 55SL417U looks great on paper and presents a terrific image, but its drawbacks keep it from truly fulfilling its value proposition.”

Toshiba SL417U series information: Our review of the 55-inch 55SL417U from Toshiba is based on our hands-on experience with the 46-inch 46SL417U TV. The observations made do apply to other set in the SL417U series, the 42-inch 42SL417U. According to Toshiba, the SL417U TVs have identical specifications (excepting for dimensions and weight) and the performance should be similar.

As the prices of LED televisions recede, it seems as if quality, performance, size and features are finally coming into focus. A year ago, the notion of getting a 46-inch, LED-backlit, 1080p, 120hz display with a bevy of Internet apps, widgets and Wi-Fi for around $1,000 seemed like a pipe-dream. Yet, here we sit with the Toshiba 55SL417U, which offers all of the above, perhaps hitting the proverbial bulls-eye of the value proposition target. Unfortunately, this TV, like so many others, is not without its quirks. We spent some quality time with the Toshiba 55SL417U and discovered where it delivers and where it fails.

This particular display’s packaging was about as slim as the TV itself. Since the TV is pretty light and the packaging slim, one person managed to carry the 55SL417U down a flight of stairs and into our testing room. Times have changed, indeed.

The 55SL417U is a reasonably attractive TV. Its bezel is thin enough (as little as 1 inch toward the top), but it isn’t uniform. The left and right edges of the display are trimmed with chrome pieces, and the bottom edge is lined with a thick enough piece to house down-firing speakers, control buttons and an LED indicator light. The 55SL417U’s stand is made of glass with all but a thin strip at the edges blacked out. It is attractive until you touch it, which is to say it is a finger-print magnet.

The 55SL417U’s LED-backlit LCD display has an 8ms response time, 120Hz refresh rate, and 1080p HD resolution. The TV comes with a bunch of proprietary processors to smooth motion blur, correct for color accuracy and dynamically adjust the backlight to suit that material that is being displayed. After calibration and testing, we ended up turning most of these features off, though.

The 55SL417U offers access to some of the more popular Internet video and audio sources and, since it is DLNA certified, can access content on a local network for playback of video, music and pictures. Netflix, Pandora, YouTube, CinemaNow, Blockbuster Video on Demand and VuduHD are represented, but no HuluPlus or Amazon Video on Demand here. The set also comes with access to Yahoo’s widget gallery.

To test the 55SL417U, we connected a Sony BDP-1700ES Blu-ray player as well as a basic antenna for some terrestrial HD reception. For video content, we chose the 2D version of Avatar (in both Blu-ray and DVD format) and the 2D Blu-ray version of Cloudy with a Chance of Meatballs. We also spent some time streaming YouTube and Netflix videos, as well as some content stored on a networked computer.

Before we got down to watching, we did a basic calibration of the 55SL417U’s video settings using two popular Blu-ray calibration discs. For the most part, this TV’s neutral settings were pretty close to what we settled on during our calibration. We tested the 55SL417U in a dedicated, totally dark media room but we can assure readers this display will have no problem in a brightly lit room.

Once our calibration was completed, we ran a few tests to see how the close the display got to some of the industry standards. The 55SL417U clipped very little of the content below true black, and the display was able to produce very intense whites without an overblown backlight setting and without significant loss of contrast. Dialing in exact color settings was a bit tricky, and even though we ended up happy with our settings, we felt like the TV has a natural tendency towards a warm image with particularly intense oranges and reds — even with the color temperature adjustment set toward the “cooler” side of things.

With all the tech-y stuff out of the way, let us just say that the 55SL417U looked spectacular for a TV in this price range. Color saturation was excellent, the image was sharp, and stayed that way even during scenes with a lot of motion. We really appreciated the contrast this display was able to pull off as well. Let it suffice to say that this TV’s strong point is its picture. To get this kind of image quality at this price point is a pleasure to see.

Unfortunately, that’s where our love affair with the 55SL417U ended. The more we used the set, the more we discovered some of its limitations. First, we must discuss the sound…or lack of it. We can’t recall having tested a flat-panel television with speakers that sounded this poor before. Granted, speakers that are aimed downward are at a certain disadvantage to begin with, but it just feels like Toshiba slapped the speakers in at the last minute with no real engineering considerations. Perhaps it comes down to bad parts, or maybe a simple DSP chip would help. Regardless, we found this TVs sound unlistenable. We highly recommend the use of a sound bar or home theater system in most cases, but this TV downright requires it.

Viewing angles for the 55SL417U also left us disappointed. Sitting off to the side or standing up seriously diminished both brightness and clarity. Users who plan an elevated mounting position (like above a fireplace) will need a flexible mount that pivots down for the best picture.

The Toshiba 55SL417U looks outstanding. In fact, we’d rate it as excellent, but the set’s terrible sound quality will be a deal breaker for anyone not planning on connecting some sort of external audio source. We also find it odd that the only input connections are to be found on the rear of the set, and that those connections do not include either component or composite video connections. It is nice to see so many Internet content apps, but the fact that most of them were slow takes away from their inclusion and, therefore, the built-in Wi-Fi adapter. So, while the Toshiba looks great on paper and presents a terrific image, its drawbacks keep it from truly fulfilling its value proposition.