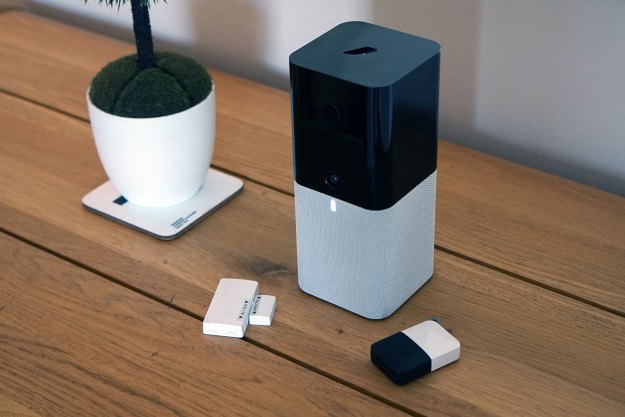 We reviewed Abode’s all-in-one security starter kit late last year, and while we weren’t bowled over by its performance, it offered reasonable value for those seeking a quick and easy home security boost. Now the company is back with Iota, a refreshed (and at $229, cheaper) entry into Abode’s smart security platform.

For those new to Abode, the company offers a typical range of home security components — a smart camera, and door, window, and motion sensors, all of which connect to a network gateway serving as both smart home controller and siren. It’s a standard model we’ve seen deployed with success by Nest, Simplisafe, and others.

This time around, Abode has managed to cram both a 1080p camera and motion sensor into the redesigned Iota gateway, which looks far prettier than its predecessor. There’s also room in the box for a mini door/window sensor and a key fob, which is used to arm the system. As before, you can expand security coverage throughout the home with a huge array of sensors.

The Iota gateway is very much the brains of the operation. Alongside the camera, motion sensor, and 93-decibelsiren, the gateway is packed with smart home protocols, allowing it to control a plethora of third-party devices. Alongside Abode’s SecureRF radio, you’ll find ZigBee PRO, Z-Wave and Wi-Fi on board for connecting up to 160 devices, while partnerships with Yale, Kwikset, Hue, Ecobee, Philips Hue, and others up its credibility as a smart home hub.

In the event of a power outage, Iota keeps working, courtesy of a backup battery that supports up to 6 hours useand optional 4G/LTE SIM. If that’s not enough protection, homeowners in the U.S. can also add a 24/7 professional monitoring plan that promises to alert emergency services about a range of issues.

We’re pleased to see that Abode has taken time to improve the look of the gateway, although the contrasting two-tone design still jars. Curved corners and a fabric-wrapped base adds aesthetic appeal, but the construction remains disappointingly cheap. The fabric wrap is a little loose and the two halves of the gateway move around far too much.

The accompanying key fob and door/window sensor are both reasonably compact. The sensor, in particular, represents a leap forward for Abode compared to last year’s kit, although it can’t compete with the Lilliputian proportions of the Wyze Sense.

Overall, Abode has taken a step forward with Iota’s design, but it’s not the leap we’d like.

Easy to get up and running

One area in which Abode excels is ease of use, and we found setup to be a cinch. You’ll need to connect the gateway to your router using a supplied Ethernet cable, but you can switch to Wi-Fi later and place the gateway camera wherever you wish. Flick a switch to activate the backup battery, then use the Abode mobile app (or a web browser) to get up and running.

The fabric wrap is a little loose and the two halves of the gateway move around far too much.

During configuration, you’ll connect both the key fob and sensor. We encountered no issues detecting or configuring either. The final step is to physically install your sensor on a preferred door or window. The app provides light guidance, and you’ll find 3M sticky pads in the box. Once installed, we found the sensor to be highly responsive, updating its Open/Close status within a second.

When you activate Iota’s away mode, you’ll be given 60 seconds to vacate the premises, after which the system is armed. The gateway’s integrated motion detector proved to be as responsive as the mini door/window sensor. Intruders will certainly be disturbed by Iota’s piercing siren, while in-app notifications and emails will ensure you’re in touch with events. Once triggered, we loved how easy it is to check the live feed and review the event that triggered the alarm. The app also provides a quick shortcut to call the police, while disabling the alarm is a one-tap job.

In terms of image quality, Iota’s integrated 1080p camera offers a huge leap in quality from the standalone accessory we tested last year. A generous field of view covers even large rooms with minimal fish-eye effect, while daytime images are reasonably sharp and clear with accurate colors. The camera will automatically switch to night vision in low light – imaging here is a little harsh, but Iota does a decent job of illuminating rooms using infrared with decent range. The resulting video is sufficiently bright and clear for detecting intruders. While Abode offers a couple of video resolution, capture and bandwidth settings, sadly there’s no brightness, contrast, or white balance settings.

The camera does boast two-way talk, courtesy of an integrated mic and speaker. As with most smart cams, performance isn’t great. Iota’s microphone and speaker deliver muffled audio and we noticed a couple of seconds latency when talking into the mobile app and the audio being played by the gateway.

While we love the convenience of smartphone control, when it comes to security systems — particularly cameras — a larger screen comes in handy. The good news is that Abode offers a choice of web app or mobile app control. Both are neatly designed and well organized, although we did experience some issues in the Android app on one phone, which repeatedly hung on the splash screen and left an annoying, persistent location services notification on screen. We fixed the issue by reinstalling the app.

The mobile app hasn’t changed too much since our last review in December — and that’s good. A neat timeline view allows you to see events at a glance, and it’s easy to dive into your camera’s feed and event history. Should you need to grab a quick video clip or still from the camera, you can do so with a couple of taps.

Third-party integrations and automated routines can be configured via the web browser or mobile app. A new CUE Automation feature (currently in beta) sees Abode setting itself apart from other security vendors with a simple and friendly approach to configuration. Select a trigger from the available list, tap on the devices you wish to activate, configure the actions, and you’re done.

Unfortunately, third-party devices, like the Ecobee SmartThermostat that we connected to the platform, aren’t yet eligible for automation, but we love how simple automations are to configure with this new feature. There’s IFTTT support for enhanced third-party integration.

Abode Iota is protected by a 1-year warranty.

The Abode Iota Starter Kit offers significant improvements over the Smart Security Kit we reviewed last year. While it doesn’t check all of the boxes in terms of hardware quality, the integration of a high-quality smart cam and dedicated motion detector ensures Abode can compete more effectively with smart home stalwarts like Nest Secure, Ring Alarm, and Arlo.

As an all-in-one solution, Iota is quick and easy to get up and running, while a vast array of sensors and other smart home accessories adds sophistication on demand.

Abode Iota offers good value and a wide array of accessories ensures the system can grow with your needs. Few can match its versatility, but if you’re seeking alternatives, check out the Honeywell Smart Home Security Starter Kit ($349), or if you’re happy to add a separate camera, the Simplisafe Home Security System ($229)

Now 5 years old, Abode continues to build and refine its smart home platform. Investing here won’t get you the security of a Google, Honeywell, or Amazon, but we see no specific issues that would suggest Abode won’t be around in the medium term.