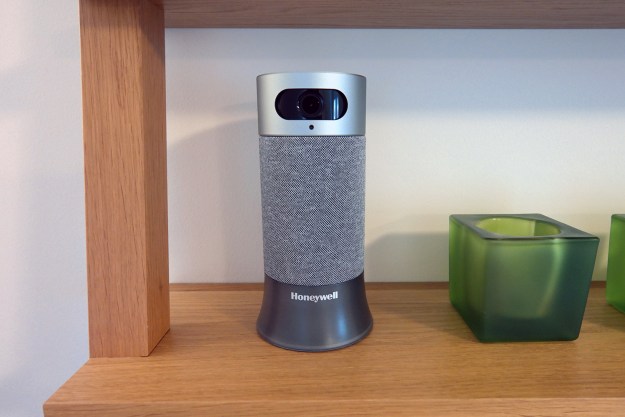 Protecting your smart home can be a confusing proposition. First, you have to wade through a sea of security products to select the best cameras, sensors, and sirens for your home. Of course, your favorites rarely work together out of the box, so be ready to lose hours, or even days, working toward responsive, seamless protection.

It’s no surprise, then, that we’ve seen a minor explosion in smart home security kits this year. From the premium Nest Secure to the comprehensive, pick-your-own selection offered by Simplisafe, to the budget-friendly Ring, there’s now a great selection of do-it-yourself starter kits available, designed to take the hard work out of home security.

Joining them this fall is the $449 Honeywell Smart Home Security Starter Kit (RCHS5230WF). Comprising an Alexa-enabled, 1080p indoor security camera/base station, two access sensors for windows and doors, and a remote key fob, this new system can be extended with optional motion sensors and wireless cameras for comprehensive protection.

The compact, innovative base station is perhaps the star of the show. No longer the sole domain of the smart speaker, we’ve seen a steady stream of ambitious Alexa-enabled smart devices hit the market this year, from smoke detectors to GPS devices, routers, and microwave ovens. So, it’s no surprise to see Amazon’s omni-present assistant pop up in a home monitoring system.

The device also plays nicely with the Google Assistant and IFTTT for an extended selection of smart integrations.

Honeywell’s stylish base station is that device. Packing 1080p video resolution, a 90dB siren, and advanced tricks like facial recognition, the cylindrical, mini-tower sports an illuminated, flared base for stability, a gray cloth-clad body, and a rotating metal cap that covers the camera lens for privacy. Conveniently, while the device serves as an Amazon Echo speaker replacement, it also promises to play nicely with the Google Assistant and IFTTT for an extended selection of smart integrations.

Powered by a capable 2 GHz Qualcomm Snapdragon octa-core processor, the base station is packed with additional features that elevates this Starter Kit over its peers, such as Z-Wave Plus control, Bluetooth 4.2 and high-speed 802.11ac Wi-Fi. There’s more to come. Alexa-controlled audio streaming is also on the way, courtesy of a 5W omni-directional speaker.

The supporting key fob and access sensors are less exciting. The sturdy, rectangular key fob can hang on a key ring and allow easy arming of the device. It looks neat enough, but we were more surprised by the huge door and window sensors that are supplied in the kit. Having been impressed by smart and unobtrusive access sensors from Nest and Simplisafe this year, Honeywell’s accessories are a disappointment.

Powering on the camera, we loved the jelly-like glow that emanated from its base. Eschewing the standard Alexa light ring, the lower section of the Honeywell base station switches color, so you can check security status at a glance. Audible prompts guide you through setup, which is succinctly performed through the Honeywell Home mobile app. Show the camera a QR code, displayed on your phone, add your Wi-Fi details, and you’re almost done.

Adding your accessories is designed to be a simple task, although we found the experience to be choppy. Press two buttons on the key fob and pull the battery tabs from your sensors to pair and you’ll hear a chime from the base station when registered. However, when subsequently setting up the Key Fob with a custom name, the app complained it had lost connection to the base station and we were unable to get the device to leave discovery mode.

One factory reset later, we were able to get up and running, but our experience remained less than perfect. We found the large, self-adhesive sensor awkward to fit on doors with sculpted frames. A maximum quarter-inch tolerance between the two halves of the sensors to accurately sense a closed door meant we were unable to use the device on several doors we tested.

We found the large, self-adhesive sensors awkward to fit on doors with sculpted frames.

The use of 3M VHB tape means that they’ll stick really well to surfaces, but in the past, we’ve found that the tape can pull off paint and even plaster when removed. Renters, beware. All of the sensors included in the kit can be screw-mounted, although sadly, Honeywell doesn’t include supporting screws or anchors.

When mounting on an attic window, the bulky sensors looked really ugly. We also encountered errors during Honeywell’s sensor test where the app complained of losing Internet connectivity. Hopefully, Honeywell can add polish to their software and device connectivity to resolve some of the issues we encountered, but the sheer bulk of those sensors are more problematic. If you care about the aesthetics of your home interior, you’ll prefer a subtler design.

The Honeywell Home app (formerly known as “Lyric”) is where you’ll manage your security settings. As we’ve discovered in previous reviews of the company’s kit, the app is very simple to use and neatly laid out. A simple switch toggles the systems security mode. Tap Away, and you’ll have a minute to vacate the premises before the system is armed. A Night setting disables the camera and mutes notifications, should you need to sleep easy. Your windows and doors will remain secure, with the base station siren triggered should they be opened.

No matter where your base station is placed, the accompanying key fob ensures you can toggle settings from anywhere inside the home. We tested the key fob’s range around a four-floor, 2,500 square-feet home and had no issues arming and disarming the system.

An integrated three-microphone array enables voice control features for both Alexa and the security system itself. While the microphone did a great job picking up commands from around the room, we found commanding the security system to be rather restricted. For example, you can say “OK security, Away” to toggle the system’s Away mode, following which you’ll see the countdown begin for your exit. But, in these early days of imprecise voice recognition, the system has to ignore voice commands to disarm your alarm, ensuring a trickier job for tech-savvy burglars.

With a polite “ding” from the base station confirming each command, even technophobes can have confidence using this security system.

For ultimate ease, you can enable the system’s Geofencing mode, which automatically enables the alarm when you leave your neighborhood. With a polite “ding” from the base station confirming each command, even technophobes can have confidence using this security system. An integrated battery ensures the system will continue to operate during power outages.

We found notifications from the camera’s motion detection and sensors to be fast, with a chime from the base station and notification hitting the phone just a few seconds after trigger. To review the day’s events, swipe up from the Home screen to view the Activity Log, displayed in a simple, color-coded timeline.

Depending on the security mode selected, once armed, the base station can trigger its reasonably loud siren, fire up a red spinning light, and send out push notifications when a door or window sensor is triggered. Again, we found the system to be highly responsive throughout our tests. Should the camera detect motion, rather than risk a false alarm, you’re instead directed to the app’s camera view to check what’s triggered the alarm. Should you see a problem, you can trigger the siren manually with a single tap or take advantage of two-way audio, the quality of which is a cut above most smart cams we’ve tested. While we’d like the option of an immediate siren trigger with motion detection, the existing design is logical.