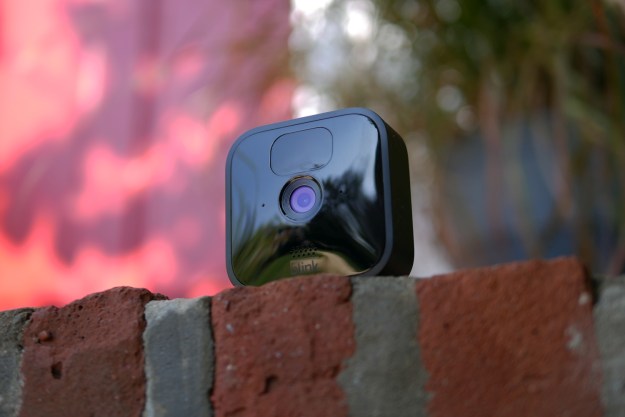 “The followup disappoints with few new features to differentiate it.”

The Blink XT has been a fan favorite for many reasons, while also making many of our own best security cameras lists. This security camera is simple, long-lasting, and works flawlessly in outdoor settings, making it an ideal cam if you’re looking to have eyes on outside of your home.

Now we have a new Blink Outdoor Camera, which shares many of the same features as its sibling – including 1080p video, two-year battery life, and weather-resistant construction. With so many similarities, is it really worth an upgrade?

Typically there’s a distinguishable difference between old and new, but that’s tough to discern with the Blink Outdoor Camera. It looks the same, albeit a smidgen thinner than its predecessor, but the same squarish design remains a distinctive design language for Blink. The camera lens now sits directly in the middle of the camera, versus the offset placement configuration found with the previous Blink XT2. Lastly, it features the same weather-resistant design as before — complete with a mounting attachment for walls.

Beyond the design and digging into the specs, there’s very little to separate the two models. In fact, the Blink Outdoor has the same camera specs as before. It offers 1080p video capture up to 30 FPS, infrared night vision, and a 110-degree field of view. For an outdoor camera, it’s a narrow field of view, as most cams on the average hover around 130 degrees. It shouldn’t be an issue if you’re covering an isolated space, but it’s clearly not something you’ll want to try and cover the entire front yard with one device.

Honestly, it’s frustrating that there’s not even the slimmest margin of difference between this and its predecessor. Given that the Blink XT2 was announced in 2019, you would think the new model would offer a headline feature.

What made Blink’s past outdoor cameras appealing was their free cloud storage. However, that’s off the table for new owners. Existing users will continue to get this with any devices they add, but new accounts that were created after April 15 won’t have the option for free cloud storage. Instead, they’ll have to subscribe to a Blink subscription plan that starts at $3 a month per device, or $10 per month for unlimited cameras at a single location.

Thankfully, there’s a local storage option where you can save your clips to a USB flash drive through the new Blink Sync Module 2. The nice thing about it is that it’ll continue to store recorded footage until it’s full, then delete old ones to make room for new clips. It’s a wonderful option to minimize your out-of-pocket cost each month.

Setting up the Blink Outdoor Camera is a breeze, which requires it to link up to the Blink Sync Module 2. Once set up, you’re able to adjust some of its settings on the Blink mobile app. It’s a bare-bones affair quite honestly, lacking the polish and depth of other cameras. There are options to adjust its motion detection sensitivity, clip length, retrigger time, and set up motion zones, but it’s lacking some of the advanced functions of similarly priced cams.

For starters, I would’ve loved to see some sort of offline mode or the ability to set up time-lapse shots, similar to what the Wyze Cam Outdoor offers.

The quality of the camera is passable, but it suffers from some noticeable artifacts that muddies up the quality at times, though it tends to clear up shortly after that. While I can still make out most things in the shot, it lacks the sharpness and fine detail quality of its contemporaries – with colors appearing a bit on the mute side.

In the dark, its night vision kicks on to illuminate roughly a 25-foot range in front of the camera in pitch black. Again, it’s a bit on the softer side, but I can still make out the occasional deer that runs through my backyard area.

There’s two-way audio support if there’s a need to interact with someone or something. The internal speaker, though, is surprisingly loud and powerful – so it’s more than usable for conversations.

Blink’s new camera is simply too similar to its previous one.

Lastly, there’s the two-year battery life it’s rated for with its two lithium batteries, just like with the Blink XT2. So far, it’s hard to say what its battery life is like, mainly because you don’t get a percentage indicator in the app. Instead, all that I see so far based on its usage is an “OK,” which is as vague as they come. I just wish it provided more than just that. However, there is a microUSB port hidden behind a plastic covering on the back, which works to provide the camera with power.

The Blink Outdoor Camera costs $100 for a kit that includes the camera and sync module, while each add-on camera tacks on $90. Blink’s new camera is simply too similar to its previous one, making it a forgettable option when you have so many others that do much more for about the same price.

In all honesty, you can save yourself the money and still pick up the Blink XT2 at $65, which is a decent savings knowing the similarities. If you’re looking for something on the affordable side, the Wyze Cam Outdoor continues to be a standout for its impressive performance, rich features, and offline recording capabilities. Alternatively, the Arlo Pro 3 is a champ with its wide field of view, crisp video quality, and sharp night vision.

The all-plastic construction makes it lightweight, but still feels solidly constructed to withstand minor drops. It’s also designed with an operating range of minus-4 to 113 degrees Fahrenheit, so it’ll be able to withstand the great outdoors year-round in most locations.

In the event of a defect, there’s a one-year limited warranty that’ll cover it.

No, there are not enough changes and improvements to warrant a purchase over the previous Blink XT2.