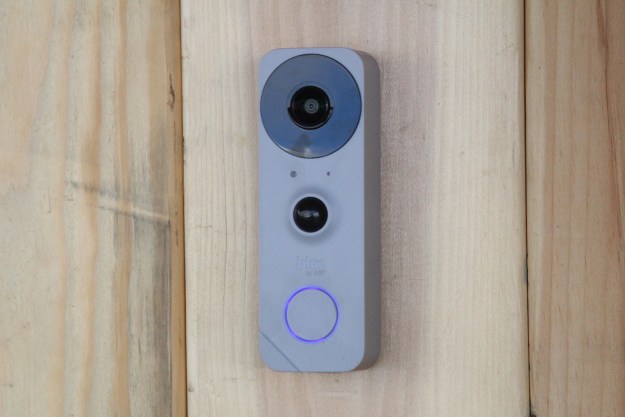 “The uninspiring hardware and an app badly in need of a redesign make this experience unpleasant.”

What do you do when you’re a legacy security company that’s being constantly challenged by newcomers in the DIY sector? Smart home tech makes the installation of security systems ranging from the complex to the rudimentary accessible to the everyday user. ADT saw that and adopted an “If you can’t beat ’em, join ’em” policy. Thus Blue by ADT was born.

One of the focal points of the Blue by ADT security system is the Blue Doorbell Camera. This is a doorbell camera with a 180-degree field of view and facial recognition that can identify who is at your door. Your front door is the center of the comings and goings around your home, so having camera coverage is crucial to any security system.

The hardware for the doorbell is not particularly exciting. I reviewed the Pearl Gray version that has a modern, if slightly boring look. Basically, it’s a rounded rectangle. At the top is a large black camera lens that defaults to 130 degrees, but you can expand to 180 degrees, if you don’t mind a little fisheye effect. Every Blue by ADT device comes with a diagonal slash across the bottom that glows blue when the device is in operation, which is a nice accent. The ring light around the doorbell is a nice addition to the aesthetic that neatly shows people where the button is, lest they smudge the camera lens thinking it’s a button.

This is not the bulkiest doorbell I’ve reviewed, but it is a chunky boy to be sure. You’ll want to make sure the look of the doorbell matches your current front door decor. We tested the Pearl Grey version; there is also a darker graphite option.

The doorbell mounts in an unusual way. It comes with a power plate to which you connect the wiring. Then you mount that power plate to your wall. The doorbell itself has a tiny on/off switch that you need to switch to “on” prior to snapping the doorbell into place on the power plate. The doorbell also contains a small battery backup for times when you lose power, though our testing indicated that’s measured in hours, not days.

After you connect the doorbell to the app, it does all the usual video doorbell things. You receive notifications of movement and when the bell rings. You can also buy an additional chime extender for around $50, which is a large gray box you plug into an outlet. The extender serves as a door chime, a Wi-Fi extender, or both. I found it nice having the extender plugged into a back room so I would know if someone came to the door and I didn’t hear our mechanical doorbell.

The doorbell also comes with facial recognition that didn’t seem to work very well for me. I only tested the doorbell over a few weeks, during a time when not too many people were coming by for a visit. It’s possible over time the facial recognition would start to pick up on my face, but I’m giving it the benefit of the doubt in saying I simply didn’t test it long enough.

Picture quality is quite good. Video is sharp with good detail, though there is a very noticeable fisheye effect when the lens is set to 180 degrees. Even at night, the video is crisp and clear. You can adjust the video quality between 720p and 1080p. Clips are recorded whenever an event happens, but these events are limited to motion and people. It would be great to see some Artificial Intelligence (A.I.) kick in here to break down the motions. Additionally, I’d like the doorbell to tell me if there’s an animal or package on my doorstep. This is something you get from the Nest Hello doorbell. The app also allows you to manually adjust brightness and contrast on the camera, which is nice, but that leads us into my biggest problem with the system.

Then it all falls apart, due to the app

The app is not awesome. It has some high points for sure, but the overall general experience is very slow. Doorbells take 7-10 seconds to ring through. Motion notifications can take minutes, so if someone does grab that Santa Claus off your doorstep, you’ll be too late to stop them. Loading video takes anywhere from 10-30 seconds, which is a very long time to stare at your phone waiting for it to do something. Moving between menu options started out sluggish, but that actually cleared itself up toward the end of our review period.

When you first log into the app, each camera you have set up takes a snapshot to update the main screen, which is nice. It can take up to 10 seconds to update that snapshot, which makes it feel less like an alert sentry guarding the base, and more like a rent-a-cop scrambling to turn off the TV when the boss walks in. As I mentioned before, you can adjust the brightness and contrast, which is nice, but the part of the app where you make the adjustments is four levels deep in a menu. Then you need to go back to the main screen and wait for it to take another snapshot to see how your adjustments turned out.

Blue is constantly expanding the capabilities of this device, so you should see upgrades in the future as well.

The app is not all bad. When you first enter the app, you get a display of all the cameras you have set up, and you can livestream all of them at once, which is very nice. The home page also features a recent history of all recorded events and a Crime Watch section similar to Ring’s Neighbors app. You can also section off portions of your porch from which you don’t want to detect movement. When you use the talk feature to speak through the doorbell, your voice is loud and clear.

But, when you consider the sluggishness of the app, as well as some infrequent connectivity issues, it’s not a good overall experience. I worked pretty extensively with a product manager at Blue by ADT to try to clear some of the connectivity issues up, and I think we solved most of them. But in the days since that conversation, I still found the doorbell occasionally disconnected from Wi-Fi. No other doorbell that I’ve tested has experienced such outages. Blue by ADT indicated that more server side changes were being pushed out this week though, so it’s possible that might help clear some things up.

There are some good ideas here. The hardware, aside from being rather uninspired, checks quite a few boxes including battery backup, easy installation, and crisp video quality. But the app, which is crucial to the overall experience, really sours things. It needs an overhaul. Some connectivity issues are there as well. It’s very possible that updates to the app might resolve most of the trouble, but for now, this is a doorbell that is hard to recommend.

Yes. The Blue Doorbell camera doesn’t do anything that other doorbells do not do. The 180-degree field of view is matched by the Vivint Doorbell Pro. The talk feature is matched by basically every other doorbell camera on the market. The Doorbell does not record 24/7 footage, so there’s no scrubbing back through a timeline — like you get with a Nest Hello. That being said, motion detection is very accurate, so you get recorded clips of basically everything that happens in front of your door. Unfortunately, the app and the uninspired design hold this back.

The Blue by ADT Video Doorbell is solidly built, so I’d imagine it would last for several years. It’s water resistant and can withstand temperatures from -40° to 104°F, or as we like to call it in Chicago, “September.” Add to that the Blue by ADT Video Doorbell works with Google Assistant, IFTTT, and Alexa, and the offering is solid. Blue is constantly expanding the capabilities of this device, so you should see upgrades in the future as well. Blue by ADT cameras come with a one-year limited warranty.