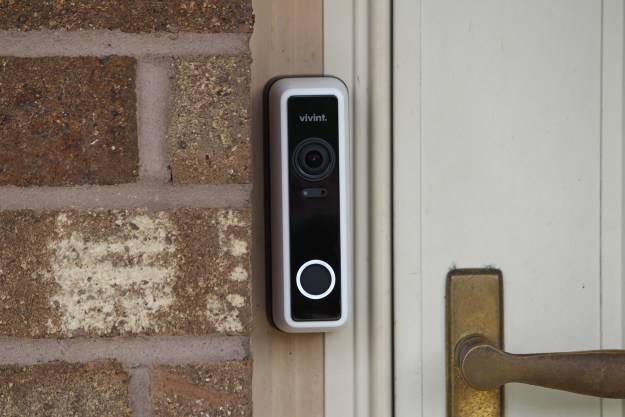 “The Vivint Doorbell Camera Pro's mission is to proactivily protect your packages with A.I.”

Package theft has become a phenomenon in the past few years. Vivint set out to try and curb that behavior with a new SmartSentry deter mode that actively protects your packages from thieves. It put that new deter mode into its new video Doorbell Camera Pro that integrates with the rest of the Vivint package. I put the doorbell through its paces for the past month, and this is what I’ve learned.

Right off the bat, the Vivint Doorbell Camera Pro comes with the same caveat as the rest of the Vivint family of devices. You need a Vivint security system installed in your home to use the doorbell. If you are only looking for a video doorbell, you can stop reading at this point. But if you’re interested in the Vivint system, then read on because the doorbell does some awesome things.

The Doorbell Camera Pro hardware is slim compared to most other doorbell cameras out there. It still very much looks like a video doorbell, but some options like Ring Video Doorbell 3 Plus are chunky. The Vivint Doorbell is much more svelte, which homeowners should appreciate. The black face of the doorbell starts with subtle branding at the top, with the camera lens just below and the doorbell button at the bottom. A ring light surrounds the doorbell button. The rest of the casing is white.

The Vivint Doorbell Camera Pro shares a lot of features with other doorbell cameras. It comes with a 65dB speaker and microphone for two-way communication. Visitors reported that the speaker was clear and easy to hear. The microphone is very sensitive and visitors can be heard clearly as well. The camera records and streams video at 1080p. You can also unlock doors directly from the camera interface, which is convenient.

No escaping this camera

This doorbell comes with two hero features, the first being a 180-degree field of view from left to right and from top to bottom. This is similar to the Arlo Video Doorbell. The advantage here is obvious – even a package left on your doormat is visible. The wide field of view allows you to survey your entire front porch as well. This is really impressive in practice. My front door is recessed into the brick, so I can’t take full advantage of the left-to-right view, but certainly the 180 degrees top and bottom are advantageous.

As for pricing, the Vivint Smart Doorbell pro is on the expensive end at $250. As mentioned, the doorbell is professionally installed, which sometimes costs $99. But the $99 is the cost for installing everything in your home, not just the doorbell, so it’s hard to gauge an installation cost. For my part, my installers were fast, skilled, and very professional. Overall, they also saved me a lot of hassle from installing it myself. Speaking of which, my installers offered to run the doorbell out to the brick facing of my house, so I could take advantage of the 180-degree field of view, but I declined. I’ve never been a fan of that look.

Video quality from the 180-degree camera is adequate for its purpose. Its quality is something you’d expect to get from a midrange phone, for example. That’s fine for identifying visitors, bad for selfies at the club. The center of the frame is quite clear with a bit of a fisheye effect as you get out toward the edges of the frame.  Clarity is sharp about to about 10 feet away and drops off quickly after that. My mailbox at 45 feet away is a pixelated work of art.

The other hero feature is similar to the one I tested with the Vivint Outdoor Camera Pro and comes in the form of SmartSentry deter mode, powered by artificial intelligence (A.I.). Vivint really wanted to focus on package delivery and porch pilfering, so the doorbell comes with sentry mode. When the camera detects a package being delivered, it notifies you on your phone. From there you can turn deter mode on. When someone else approaches your front porch, it plays the deter tone. I prefer the whistle followed by “Camera recording” but there are other tones you can choose from.

In my testing, this feature worked very well. Whenever deter mode was turned on, and a person approached, there was no doubt they were being recorded. Vivint’s Chief Technical Officer, JT Hwang, said that many people use deter mode at night, not just for package protection, but just to keep people away from the house. That’s not very neighborly, but I won’t judge. As long as Vivint is using A.I., I’d like to see an extra step by adding facial recognition. That way, the doorbell doesn’t yell at me when I get my own package.

The ring light around the doorbell it meant for notification, not illumination. When the deter tone is played, the ring lights up red. When someone approaches the door while SmartSentry is turned off, the ring light lights up white. It’s handy at night so visitors can see the button.

The Vivint Doorbell Camera Pro suffers the same downside as its Outdoor Camera Pro counterpart. The doorbell only detects packages and people. It does not detect other motion or sound like the Nest Hello Video Doorbell and I miss that. If there’s an animal living under my porch or a loud crash somewhere in the neighborhood, I’d like to know about that. Vivint says it’s focusing its A.I. efforts on package protection, but additional events may come in the future. At least Vivint is clear about its priorities.

Another limitation to the camera that mirrors the Outdoor Camera Pro is the reliance on the Smart Drive to record a 24/7 feed. Without the Smart Drive, the doorbell will record events when a person or package is detected, and you’ll get a live view of the camera, but there’s no scrubbing over the footage. If you want 24/7 recording, plan to spend the extra money for the Smart Drive.

Limited range, but consistent with the mission

I noticed the range of the night vision is quite limited as compared to a Nest Hello Video Doorbell in particular. Below I placed a screenshot of each doorbell at night, side by side. In both shots, you can clearly see the Santa Claus statue that sits at the edge of my front porch (yes, even in August). In the shot of the Vivint Doorbell Camera Pro, the picture falls off quickly right past the front porch. With the Nest Hello Doorbell, the rest of the front yard is clear — or at least it would be if I had cleaned the lens on the camera, and let that be a lesson, kids. Remember to clean off your doorbell camera lens every once in a while.

When I spoke with Vivint’s CTO about this, he explained that the strength of the infrared light is a compromise due to power and heat concerns. The infrared light on Vivint’s Outdoor Pro cameras is stronger because they draw their own power. When you’re limited to doorbell current, and you’re trying to take in such a wide field of view, you hit a wall. I get that, and the camera range does cover my entire front porch, which is consistent with Vivint’s mission — your porch and packages. To be fair, that is covered.

Finally, just like the rest of the Vivint system, compatibility with certain smart displays would be nice. When someone rings the doorbell, the video appears on the Vivint security panel, which is nice, but if I’m in the kitchen, I already have a Lenovo Smart Display right there. Vivint is looking into smart display integration, but it’s not there yet, which is disappointing.

This is a doorbell camera with a specific mission, which is in its own way refreshing. These days it seems like smart tech wants to be everything for everyone. This doorbell was designed to protect your packages, which is arguably the best reason to have a video doorbell. Plus, unlike many others, Vivint uses A.I. to proactively protect packages. A video doorbell may help you catch thieves, but SmartSentry stops them before you lose your stuff. It wouldn’t surprise me to see more doorbell cameras adopt a similar feature in the years to come.

There is a huge assortment of doorbell cameras available on the market. The Ring Video Doorbell (2nd Gen), Nest Hello, and others have the “see who’s at your door” thing covered. But none of them proactively protect what is at your front door. This also begs the question of is there a better alternative that integrates with Vivint? Since this doorbell is part of that system, the answer to that question is an easy no.

Yes. The Vivint Doorbell Pro is solidly built with polycarbonate and seems very durable. It has an operating range between minus-20 degrees Celsius to 45 degrees. As for warranty, all Vivint equipment is under warranty for the duration of a customer’s service agreement. For the first 120 days after installation, any needed service visits are no charge. After 120 days, service visits are $49. After the 120-day period, follow up service visits within 30 days of a $49 service visit for the same reason are no charge.

Just like anything in the Vivint ecosystem the answer is yes, assuming you’re buying into Vivint’s whole-home security. Not only does the doorbell integrate with the rest of the Vivint system you’re already buying, but the price is competitive. Even if this doorbell were offered as a stand-alone option on its own, I still think it’s worth buying. Its wide field of view and proactive SmartSentry mode are worth a few extra dollars. That’s a lot of awesome packed into one package. Even considering the compromises, this is still a good buy on its own, separate from the Vivint system.