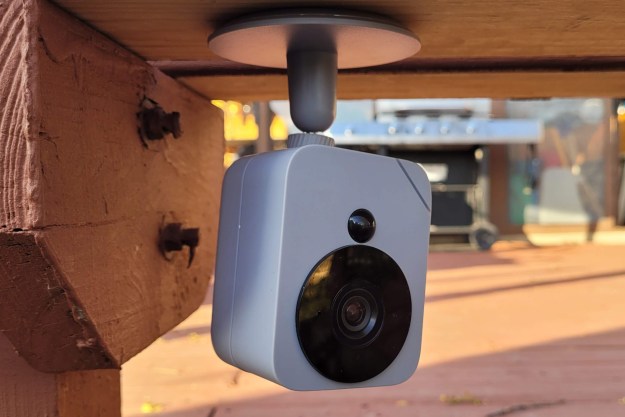 “The Blue by ADT wireless outdoor camera has its pros, but connectivity issues make the camera borderline unusable.”

If you’re interested in beefing up security around your home, ADT will happily send technicians out to your house and install sensors, cameras, and all sorts of other security gadgets around your home. It will also send out a bill afterward. But smart home technology has evolved to the point where we can set up much of our home security ourselves, no professionals required. Not to be left out, ADT has established Blue by ADT, the DIY branch of the company’s home security tree.

We already took a look at Blue by ADT’s video doorbell solution. Now, we set our sights on its outdoor camera. Blue by ADT offers a versatile, battery-powered outdoor camera that follows its video doorbell sibling in the ho-hum looks department. The unit I tested is the pearl grey version — a darker graphite version is also available. The camera is generally large and boxy, with a large camera sensor at the top and the trademark diagonal slash in the corner. The unit is IP-65 weather resistant and fairly easy to install. But what comes after the installation is not so easy. We’ll get to that.

The baseplate on the camera twists off for easy attachment wherever you want it. I found it difficult to get the plate off initially. Once it’s off, just lock it into place with three included screws lock it into place and twist the camera back on. The camera is fully adjustable — 360 degrees rotation in one axis and 90 degrees in the other, so you can basically point it at anything you desire.

Connecting the camera to the app is as easy as opening the app and adding a new device. Just follow the steps to pair the camera to your Wi-Fi and you’re off to the races (or, as I mentioned earlier, at least you should be). Using the app, you can adjust video settings, including flipping the video if you mounted the camera upside down. Personally, I think that’s something that should happen automatically, but it’s easy enough to find the option.

You can adjust a number of other aspects of the video feed, like detection zones, notification settings, and video quality (720p or 1080p). The camera has a wide 130-degree field of vision, and full night mode just like the Nest Outdoor IQ camera. The camera comes with a detachable battery pack that can power the camera for an advertised two to three months. My testing put battery life at just under one month. I saw a 4%-per-day drop pretty consistently during the three weeks I tested, so that math won’t let you get the two to three months promised by ADT, which is still minimal compared to the 365 days promised by the EufyCam2 Pro.

When I moved the camera to the front yard, I made the mistake of placing the camera within view of our Halloween decorations, which blew around in the wind, triggering motion alerts. I forgot to set notification settings to “people only,” so it’s possible that adversely affected battery life as well. I’ll take the hit on that one.

Just like the video doorbell, the camera here is very sharp and has great resolution, even at night. Plus, the two-way voice feature is loud and clear. Blue by ADT certainly knows what it’s doing in the optics and audio departments, which is really great. What’s not so great is the connectivity department.

Can you hear me now?

So now we get to it. Put simply, keeping this camera connected to Wi-Fi was a nightmare-inducing struggle. I placed the camera in three different locations in and around my house. I added on a door chime extender provided by Blue by ADT. I reconfigured my mesh network base stations trying to keep this camera connected, and in the end, it was just hit or miss.

I will be the first to admit that my networking prowess is not great. I may not have the optimal setup for my mesh network here at my house. But at the height of the connectivity problem, I had the camera placed less than 30 feet away from one of my mesh nodes. I moved the camera to my front porch, which was just a window away from the network. The camera’s habit of frequently disconnecting was maddening.

You only get peace of mind from a camera if it does its job, and this one does not.

I worked with a Blue by ADT product manager to try and resolve the connectivity problems. In the end, moving the camera to the front porch helped a lot, but not even that was a bulletproof solution. While I will admit that Wi-Fi is rarely as good as people think it should be, I can’t imagine I’m the only consumer Blue by ADT will ever encounter with a setup like mine.

Put simply, the connectivity issues the camera suffers make this a nonstarter. A security camera is so-named because it instills a sense of security in the user. This camera does not. Even when the camera itself was inside, where every other device of mine connects and stays connected, this camera still dropped out. It frankly boggles the mind.

Yes. Despite the things the camera does well, which includes easy installation, the connectivity issues that plague this device make it impossible to recommend it above alternatives. You can get everything the Blue Outdoor camera offers with other models like the Wyze Cam Outdoor. For better connectivity, you can go with a wired camera like the Vivint Outdoor camera.

The camera has a very sturdy build. I don’t anticipate any problems with the construction of the device. The camera is also IP-65 weather resistant. Blue by ADT recommends you install the camera under an awning, and if you follow those instructions, the camera should last quite a while. All Blue by ADT equipment is backed by a one-year limited warranty.

No. As long as the connectivity issues remain, there are many better options. You only get peace of mind from a camera if it does it’s job, and this one does not. The app needs an overhaul as well. If you want a professionally installed system, ADT is a great choice. But if you want to do it yourself, stay away.