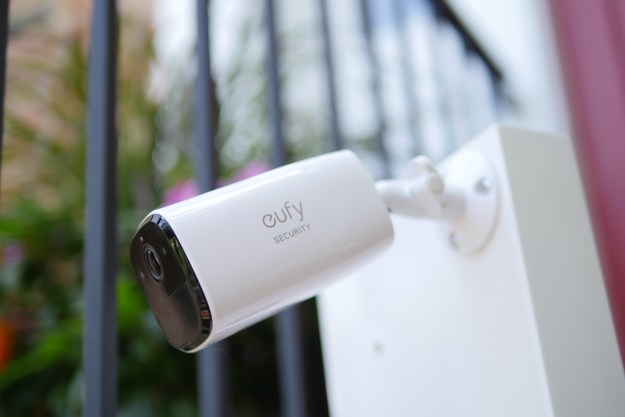 “Who wants to pay for another subscription service? The Eufy SoloCam E40 bucks that trend.”

Digital subscriptions are ubiquitous, especially in the world of security cameras. Users can only access premium features, such as cloud storage or artificial intelligence-powered monitoring, by paying for a subscription service. Between paying for YouTube Music, Amazon Prime, and Apple Fitness+, my bank account withdrawals for recurring payments are at an all-time high — so it would be a relief to potentially prevent another one from being tacked on.

The Eufy SoloCam E40 is the first of many new security cameras coming out this year that releases us from the shackles of subscription services because it’s a stand-alone, all-in-one security camera system. It doesn’t need a separate hub to store footage to a microSD card, or a subscription service to access footage remotely. The specs sheet accompanying it sweetens the deal, as it boasts 2K video recording and a 120-day battery life. It’s a dream come true — or is it?

Design: Say goodbye to the hub

First of all, I need to point out that Eufy’s previous outdoor security cameras required the use of a bridge — something I’m thrilled to know is no longer the case with the Eufy SoloCam E40. That’s because the camera now connects directly to Wi-Fi, which is a welcome relief.

There’s nothing too out of the ordinary with its design, an elongated, rectangular-shaped chassis that’s pretty lightweight and solidly built. With the all-plastic construction, it features an IP65 waterproof rating that keeps it operational in all sorts of weather conditions. While I don’t mind the screw mount that comes with the cam, I really would’ve liked to see a magnetic attachment as an option for quick and easy removal.

Installation: Up and running in about five minutes

Since the hub is out of the equation, it’s a breeze to get the Eufy SoloCam E40 up and running. In fact, it took me about five minutes to complete. Once it’s out of the box, I’m only required to run the app, then point the QR code at the camera to connect it to my home’s Wi-Fi network.

There were no hiccups whatsoever with the installation process, which required me to screw in the mount to the wall with the included screws. Despite being advertised as an outdoor camera, it can easily transition into an indoor cam as well because it’s a wire-free cam that doesn’t need constant power to operate. If you don’t want the hassle of having to recharge, you can still hook it up to a power source via its Micro USB port, which is hidden behind the rear cover.

Features: All the basics at your disposal

Today’s cameras have some advanced features, such as facial recognition to distinguish individuals, package detection to safeguard deliveries from porch pirates, HDR recording, and even the ability to digitally pan and zoom to track a person. Advanced features like this can be found in top-tier cameras like the Arlo Pro 4, but with the Eufy SoloCam E40, you’re getting the basics.

Now, that’s not a terrible thing especially when it’s effective at monitoring, detecting, and providingan overall sense of security. The set of features consists of activity zones, person detection, night vision, and local storage. With the latter, though, the Eufy SoloCam E40 doesn’t rely on a microSD slot much like other cams, but instead it has its own 8GB of built-in storage. This may be alarming in the event of a theft of the camera, but the footage is protected by military grade encryption.

Rounding out the features set area built-in 90dB siren, two-way communication, and support for Google Assistant and Amazon Alexa. These are all contemporary features in today’s security cameras, but nothing extraordinary compared to what’s offered in other notable cameras in the space.

Another aspect about the Eufy SoloCam E40 that I appreciate is that it doesn’t settle for 1080p recording, opting instead for 2K (2,304 x 1,296) video. There’s great clarity when previewing the footage on my smartphones. However, it struggles with dynamic range, which is evident in how highlights are blown out in contrast to the rest of the scenery. The footage is also sharpened too much and tends to favor a colder color temperature. While the general quality is still favorable, it captures clips at a slower 15 frames-per-second (fps) rate — far less than the 30 fps standard in other cams.

In contrast, its night vision footage is incredibly clear, crisp, and well-lit. With the help of its infrared LEDs, the Eufy SoloCam E40 captured some deer walking through my backyard with stunning clarity. Thankfully, there isn’t a dip in frame rate with night vision as it retains the same 15 fps rate. The only things missing here that would substantially add to its arsenal are color night vision and a spotlight.

After a week of putting the Eufy SoloCam E40 through some testing, I’m happy to report that battery life still clocks in at 100% capacity. I know it’s not technically at 100%, but it’s at a high enough charge to indicate a full charge. My only complaint is that you have to dig into the power manager settings to view the percentage, since the app only displays a battery icon with five bars on the main screen.

It’s one less subscription service you have to worry about paying.

Obviously, battery life hinges on many factors, but I’m hopeful about its 120-day rating. It’s ambitious, but certainly not out of the picture because the Arlo Essential XL has been chugging along now for over 90 days since I last recharged it.

Eufy’s new camera isn’t groundbreaking, but it doesn’t need to be when it certainly gets the job done by informing me of relevant detection notifications. It’s able to at least distinguish people from animals, but the Eufy SoloCam E40 really gains my attention because it’s a complete system out of the box — something that doesn’t require paid subscription services.

Its $130 cost places it in the midrange category, which is fitting for what it offers and its performance. Hey, at least it’s one less subscription service you have to worry about paying at the end of the month.

When it comes to features and performance, the Arlo Pro 4 Spotlight is still an incredible option because, for $200, it boasts 2K HDR video recording, advanced A.I. detection, and color night vision.

The Wyze Cam Outdoor is a cheaper option packed with a ton of features for $60 and even comes with a handy offline mode for recording footage to a MicroSD card when there’s no Wi-Fi connectivity.

The all-plastic construction feels sturdy, so I’m assured it will handle all sorts of weather conditions. There’s a one-year limited warranty that covers defects.

You bet. It’s one less subscription service that I need to pay for on a monthly basis. Plus, it strikes a balance with its price, features, and performance.