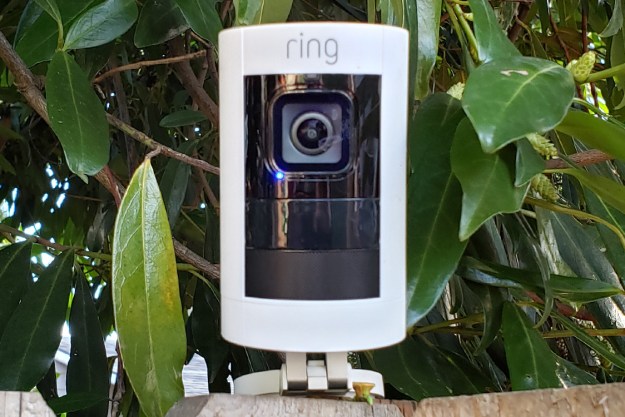 There’s something to be said for wireless devices. That feeling of being free like the wind — unattached, unhindered, and unbridled. No wires or cords sucking off of a power outlet to bring you down or keep you stationary. It’s such a liberating feeling.

We all have little wireless wonders in the form of smartphones in our back pockets, but what about smart home security devices? Can they be wireless and wonderful too? The answer is yes, yes they can. And they’re glorious.

Ring has a host of wireless home security devices, most notably a couple of battery-operated video doorbells that don’t require hardwiring — only a battery charge now and again.

Recently, the company expanded its wireless offerings with the Ring Stick Up Cam Battery, an indoor/outdoor, stick-it-wherever-you-want little camera with lots of great features. I tested out the wired version of the device earlier this year and came away impressed. How did things go with the battery-powered version? Read on to find out.

Like all Ring products, the Stick Up Cam comes with all the tools you need to set it up. In the box is the camera, the base, a battery charger, and all the screwdrivers, anchors, and mounting screws you need to place it on a flat surface or mount it on the wall or ceiling. At about 4 inches tall, the round camera is available in black or white and is somehow both lightweight and durable. The plastic on the base of the camera bends to allow for a variety of positions.

Setting up the Stick Up Cam is pretty easy. Start by downloading the Ring app if you don’t already have it, scan the barcode on the setup instructions, and then follow prompts from the app and the camera. I had the device connected to the app in just a couple of minutes.

Deciding where to put the device and then mounting it took a bit longer. I wanted coverage of my backyard, so I decided to attach it to the fence post in the rear of my yard, looking back toward my house. With an 115-degree vertical and 65-degree vertical field of view, I figured I’d be able to see the entire back of our fenced property that doubles as a squirrel highway, and I was right. Soon enough, I was getting motion alerts on my phone every 10 minutes or so. The culprit? Squirrels, birds, and another shady character that I’ve been trying to track for years.

If I’m being honest, one of the main reasons I wanted a camera in my backyard isn’t to catch burglars (or that one time the neighbor’s kid wandered into our yard without any pants or underwear on — true story). It was to catch the raccoon in the act.

Every summer, our plum trees bear delicious purple treats. And every night in the summer, a raccoon climbs that tree, picks the plums, takes a couple of bites out of them, and then drops them to the ground, leaving us with a gooey raccoon-slobbered pile of half-eaten plums to clean up.

I didn’t know what I planned to do with the footage — send it to the raccoon police or animal control? — but I was determined.

My plan was to catch the little bugger in the act using the Ring Stick Up Cam. I didn’t know what I planned to do with the footage — send it to the raccoon police or animal control? — but I was determined.

I thought I would have to wait until summer to catch the critter on camera, but I was dead wrong. The raccoon showed up on the first night I had it set up. Because there were no plums to eat, it sat on the fence next to the camera and licked the lenses. Because the camera sat on top of the fence post, it appears that the raccoon couldn’t go around it. And guess what? That raccoon hasn’t been back since. Like with human criminals, just the presence of the camera scared the raccoon off. At least, until it finds another way to sneak in for plums this summer. Whenever it does, I’ll be watching.

After too many motion alerts due to the birds, squirrels, and tree branches moving around in my backyard, I adjusted the sensitivity to avoid getting as many. The app is good like that — you can view live footage, recorded motion, check the battery life, and more. The wireless version doesn’t have a siren function, though. For what it’s worth, the camera has been up for about three weeks, and the battery is at about 72 percent. The one big advantage of having a wireless camera is also its biggest drawback — in a few months, I’ll need to take the camera down and charge the battery for a few hours. While the camera features a quick release valve for the battery, if charging it is something you’re not interested in doing, consider the wired version or the accompanying solar panel you can buy with the device.

The Stick Up Cam has clearer night vision than, say, the Blink XT camera. But unlike the Blink camera, which offers free motion clips and storage, after a free trial period with Ring, you have to pay to review recorded motion. While the cost isn’t too expensive ($3-10 per month, or $30-100 annually), it’s enough to be annoying.

I found night vision to be clear, with images closer to the lenses showing up more clearly than those in the background. Surprisingly, there was little to no lapse between when the motion occurred and the motion alerts got to my phone. I say I’m surprised because, usually, cameras mounted outside of the home experience lapse because they’re farther from the Wi-Fi signal. But Ring’s Stick Up Cam Battery didn’t seem to have that problem.

While the trees behind the camera shifted to partially block the view, the camera itself didn’t flinch an inch in the snow and wind.

Possibly the biggest surprise about this camera is how durable it really is. As I mentioned, I mounted it on the top of a fence post. Shortly after installing it, the snow began to fall, followed by rain and then wind. Forty mile-per-hour gusts to be exact. While the trees behind the camera shifted to partially block the view, the camera itself didn’t flinch an inch in the snow and wind. It’s pretty clear that it’ll stand up to the elements.

Alexa, show me the backyard

One final thing to note about the Ring Stick Up Cam Battery is integration with Amazon Alexa. If you have an Echo Show or Spot device, you can view live and recorded footage directly on those devices once you’ve connected them via the Alexa app. It’s a nifty little feature if, say, you get a motion alert but want to view footage on something larger than your phone. We found the compatibility to work well. Don’t expect Google Assistant integration anytime soon, though: Ring is owned by Amazon and is clearly on #TeamAlexa.

Ring offers a one-year warranty for the Stick Up Cam Battery, but if you subscribe to premium monthly cloud storage, you get an extended warranty.

We really like the Ring Stick Up Cam Battery. You can use it inside or outside and stick it pretty much anywhere. And we were impressed that it withstood the elements. While we’re not fans of paying monthly fees, we still think that Ring’s Stick Up Cam would be a fantastic addition to any home.

Depends on your needs and what you’re willing to spend. Arlo has one of the best outdoor wireless cams in the Pro 2, but it’ll set you back at about $400 for a two-camera set. Nest has a couple of great outdoor cameras, but nothing wireless. If you’re interested in Ring, the Stick Up Cam also comes in a wired version and a battery version with a solar panel that recharges your battery automatically. Finally, the Blink XT camera is about the same price, has free cloud storage, and takes two AA batteries, but it doesn’t have two-way communication or flexible mounting options.

Now owned by Amazon and one of the biggest do-it-yourself home security companies today, you can be sure that Ring products will continue to be supported and updated. You’re in good hands.

Yes. If you’re looking for a versatile, affordable indoor/outdoor wireless camera, Ring’s Stick Up Cam Battery is a great choice.