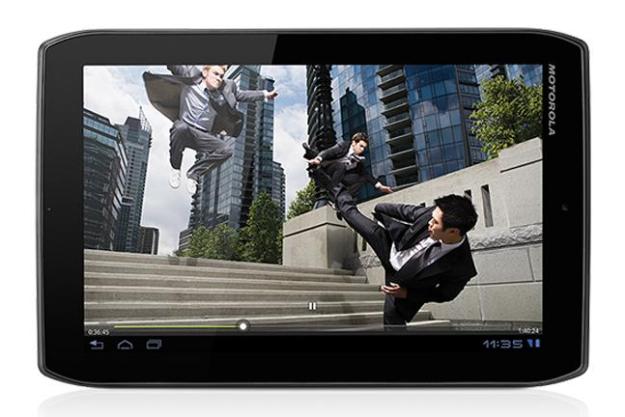 “If you want a solid Android tablet that's smaller than those huge 10.1-inch devices and has a good portable, lightweight feel, and 4G LTE connectivity, this is probably your best bet.”

We recently reviewed the Motorola Xyboard 10.1 tablet, the next generation of the manufacturer’s less-than-popular Xoom tablet from early 2011. Co-developed with Google, the Xoom was supposed to usher in the Android tablet era much as the original Droid helped prove Android was ready to compete with the iOS. Unfortunately, it’s been a rockier start for Android than Motorola had wished, but nobody is giving up yet. Instead of offering a smaller tablet in the popular 7-inch screen size, Moto is giving 8.2 inches a try. Honestly, we like it.

Like the Xyboard 10.1, the 8.2 hardware retains some of the odd characteristics of the Xoom, but it’s a definite improvement in most every way. Motorola has taken steps to make the Xyboard almost as thin (8.9 mm vs. 8.6 mm) the larger-screened Samsung Galaxy Tab 8.9, and a lot lighter (13.62 oz. vs 15.98 oz.). This is an achievement, especially considering the iPad 2 is 8.8 mm thick and weighs 21.28 oz. The smaller size makes it even more comfortable to hold and use than the Tab 8.9, though some menus are bordering on being too small to comfortably touch. Motorola’s bezel is about two thirds as thick as that of the Tab 8.9 as well, making it feel like a much leaner device, overall.

We have been preferring tablet screen sizes in the 8- to 9-inch range, which still offer all the benefits of a larger screen, but are small enough that you can do a bit of thumb typing if you’d like. The Xyboard 8.2 falls right into the low end of this range.

The Xoom had body made mostly of metal, but the Xyboard sacrifices its looks for a bit of grip. Motorola has added a lip on the two sides (portrait) of the Xyboard and covered the back edges with the rubberized coating it’s known for, making it one of the nicer tablets to hold. It also has some light edges that help you grip the edge without covering the screen in fingerprints.

The oddest part about the Xoom has returned too: all its buttons are on the back of it. We’ve never gotten used to the odd positioning of the Power button on the back of the Xoom, and the awkwardly small volume toggle on the side, but the Xyboard has a much better setup. Because the edges of the tablet come to a point, there is no room to put the buttons on the side of the unit. Instead, the power button and volume toggle sit near each other on the rear of the tablet, and are placed where you naturally grab it, allowing you to press them whenever you wish.

The 8.2 is all good on ports. Motorola has ditched its proprietary charging port in favor of USB charging, meaning you can use any phone charger in your house to juice the Xyboard up. The micro USB, micro HDMI, and micro SIM ports are all on the bottom when in portrait mode (the default for this tablet). The audio jack and an infrared sensor are on the top, along with two speakers and the front (1.3-megapixel) and rear (5-megapixel) cameras.

Despite Android 4.0 being available, the Xyboard 8.2 still runs on Android 3.2. This isn’t a huge deal, as the operating systems look quite similar, but there are a few nice enhancements that should come to Xyboard owners when Motorola finally releases an update for the tablet. Being able to swipe away running apps, track data usage, more easily place widgets, and access an improved unlock screen are a few of the outwardly visible enhancements.

Android Honeycomb has always been kind of a bore to use since its debut. It has a bland Tron look to it and doesn’t utilize touch in unique ways by allowing swiping or other intuitive gestures. Mostly, you end up tapping the screen a lot. Motorola has made some minor changes to the user interface (UI), sprucing up the onscreen navigation and clock fonts and including some of its own widgets, but like all Motorola and Verizon devices, the Xyboard is loaded with dreary grey and red backgrounds and widgets. Seriously guys, there’s nothing wrong with colors that aren’t dull and bland. Luckily, you can change the background if you’d like.

The Xyboard 10.1 included included a few enterprise-like apps such as GoTo Meeting, and built-in support for a capacitive stylus, but the 8.2 has none of these ‘business’ apps. It does, however, still have Netflix, Blockbuster, Let’s Golf 2, Madden NFL 12, Slingbox, and Skitch, a girly drawing app. Many of these are apps that seem to appear on every Verizon device.

Motorola has launched its own app store as well, called MotoPack. Luckily this store re-routes you back to the Android market for actual purchases. If it didn’t, things would get confusing. Like all Android tablets, you can browse the Android Market directly as well.

Internally, the Xyboard 8.2 is almost identical to every first-generation Android tablet, including the original Xoom. It runs on a 1.2GHz dual-core processor, 1GB of RAM, and 16GB or 32GB of internal storage. All the normal sensors and special features are present: GPS, accelerometer, digital compass, barometer, etc. There is no microSD, sadly.

We ran a Quadrant benchmarking test and the Xyboard 8.2 scored a 2,800, which is exactly the same score as the Xyboard 10.1 achieved in our tests, easily outpowering the Galaxy Tab 7.0 and 8.9, which each scored between 2,000 and 2,500. For reference, an original Motorola Droid would score about 300 to 400 in a Quadrant test.

The front and rear cameras are present and take pictures and 1080p video, but do not impress in any meaningful way. We did limited testing of the Xyboard’s rear camera in dim, macro, outdoor, and indoor environments, and found it to be rather crappy at almost everything. Pictures were washed out and grainy. The shutter speed is quite slow. Much like most Motorola devices, this will take pictures in a pinch, but don’t buy the Xyboard if camera quality is your number-one concern.

The IPS LCD display on the Xyboard 8.2 has the same 1280 x 800 pixel resolution that most Android tablets (and high-end Android smartphones) have, which looks especially good on an 8.2-inch screen. Though we’d say that the 8.2 is closer to a 7-inch tablet than an iPad-sized device, the normal 1024 x 600 resolution that tablets in this range carry just isn’t enough to properly run Android Honeycomb. Kudos to Motorola for keeping the higher resolution, despite the Xyboard 8.2’s petite size.

We tested the 4G LTE Verizon version of the Xyboard 8.2, though there is a Wi-Fi-only version available. In Manhattan, New York, we attained speeds that were typical of Verizon’s network. We averaged about 6Mbps to 12Mbps down and 8Mbps to 10Mbps up. We tested out the same network in the same location at the same time with a Galaxy Nexus, and achieved about equal speeds on both devices. Both results are faster than our Manhattan tests just last week with the Galaxy Nexus and Xyboard 10.1.

It’s usable, but not nearly as good as the Xyboard 10.1. We have not performed a full battery rundown test, but the device can keep a charge on idle for about half a week and appears to get about four to six hours of life when used extensively. If you spend your days streaming Netflix over 4G LTE, then the battery will drain faster than it will for someone who just browses the Web or plays with some apps every day. Overall, the Xyboard is in line with comparable 7-inch devices, but most 10.1-inch tablets get a few more hours of use per charge. Still, the battery life shouldn’t harm your experience too much, just plug it in every few days.

We found the Motorola Xyboard 10.1 to be a decent device, if a bit after its time, and the same could apply to the Xyboard 8.2. Despite the original Xoom floundering at its $600 to $700 price point, Motorola hasn’t lowered the bar much. A 16GB Wi-Fi Xyboard 8.2 will run you $400, with an LTE version costing $430 with a two-year contract (and who wants to sign a two-year contract on a tablet?). This pricing is on the high end of most Android tablets these days, which are now priced between $200 and $400 by most manufacturers.

Still, if you want a solid Android tablet that’s smaller than those huge 10.1-inch devices and has a good portable, lightweight feel, and 4G LTE connectivity, this is probably your best bet. The Galaxy Tab 8.9 ($470) makes a close competitor, but AT&T’s new LTE network is only available in a few cities. If you have the money and value both portability and usability, the Xyboard 8.2 is a good buy.