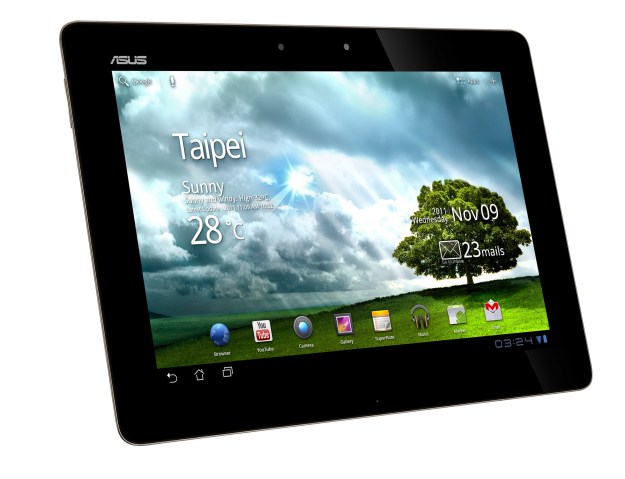 Speculation surrounding the Asus Eee Pad Transformer Prime continues to build in anticipation of the coming tablet, which saw its launch date pushed to December. Now we’ve gotten some official feedback on the keyboard enabled tablet courtesy of Asus and NVIDIA.

In a press briefing this afternoon, we were given a first look at the Transformer Prime, which will officially be announced at an event in early December. While the next-gen model will improve on the original Eee Pad Transformer (the little tablet that could, which continued to see improved sales this summer) in a variety of ways, the big news is its quad-core processor.

The NVIDIA processor, otherwise known as Kal-El, will make the Transformer Prime the first quad-core powered tablet on the market. And this translates to some seriously upgraded power, included what should be significantly increased battery life. According to Asus, that’s exactly what we can expect: The Transformer Prime will boast the best battery life among its competitors, with 12 hours of 720p playback. This is bumped up to 18-hours when used with the keyboard dock.

Of course the increased processor power means more than upping your time between charges. Asus says the Transformer Prime will be a multitasking machine, capable of running flash, 3D gaming, and full HD playback seamlessly.

But outsides matter too, and Asus seems to be taking its appearance more seriously. Gone is the overtly PC-look that the original Transformer sported, with the sleek, chrome-like coating of Asus’ new Zenbooks ushering in some new style. The Transformer Prime will be available in amethyst and champagne hues. You can a better look at the tablet over at our photo gallery.

Other features worth noting are its new camera (with enhanced aperture options, improved AF, 8MP, and back-lit CMOS sensor), advanced sound (larger speakers offer better fidelity and wider frequency), and touschscreen upgrades (Asus says the Transformer Prime’s response time is twice as fast as its competitors). Also catching our attention: The base unit will offer 32GB storage (for $499) and the next, 64GB ($599). The dock is separate and $149.

It will ship with Honeycomb 3.2, but the Ice Cream Sandwich upgrade will be available in early December. Check out the rest of the specs below (click to enlarge images).