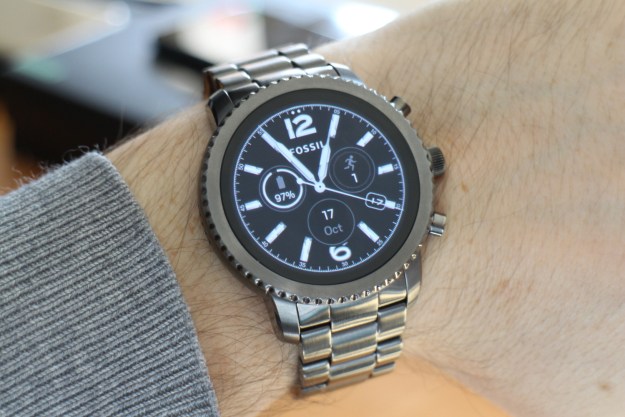 “For men with an Android phone, the Fossil Q Explorist is the perfect blend of style and substance.”

Smartwatches haven’t set the world alight in the way some people were predicting. Although Android got a head start in the battle for our wrists, the Apple Watch accounts for around 50 percent of all smartwatch sales. But thanks to the much-improved Android Wear 2.0 and the injection of some much-needed style after the entry of traditional watchmakers like Fossil into the market, it’s worth looking beyond Apple’s technological timepiece.

We really liked the Fossil Q Founder, but the company made some subtle improvements with its follow up. The Fossil Q Explorist is a smartwatch that deserves a place on your shortlist, and possibly on your wrist. It’s stylish, it runs Android Wear 2.0, and it’s not ridiculously expensive, but there are caveats, and they extend beyond the fact that “explorist” is not a proper word. Let’s take a closer look.

At first glance you could easily mistake the Fossil Q Explorist for a traditional mechanical watch. Crafted from stainless steel, it features a case that’s 46mm across. A notched bezel goes around the outside of the circular AMOLED display, which is mercifully free of the flat-tire effect that plagued older Android Wear watches.

The bezel doesn’t move, but there’s a rotating crown on the right, flanked by two buttons. The case is 12.5mm thick and you can attach standard 22mm straps. Our smoke steel review unit came with a standard steel link strap, which fit very nicely after some fiddly adjustment. You can take it to a watch specialist to remove links from the strap so it fits you, or you can read our guide to learn how to do it yourself.

This is a good-looking smartwatch with an understated, masculine style that means it pairs just as well with a suit as it does with t-shirt and jeans. The build quality is excellent and you’ll find yourself wanting to show it off, though it may be too chunky for smaller wrists.

The Fossil Q Explorist is a smartwatch that deserves a place on your shortlist, and possibly on your wrist.

The Fossil Q Explorist is also heavy. After removing a couple of links to get the fit right, ours weighed in at 166 grams (5.85oz). Just to put that in perspective, our iPhone 8 only weighs 148g (5.22oz). There were times during the work day, amid frenzied typing, when it felt slightly uncomfortable. You certainly aren’t going to forget you’re wearing it.

We found the touchscreen display bright and easily legible in most environments. It’s sharp at 454 x 454 pixels, and perfectly round — there’s no cut-out section at the bottom. It’s responsive, too, though typing on a display this size is never a great experience.

The rotating crown is very handy for scrolling through notifications, but it feels a little mushy when you press it. The buttons angled above and below it have a satisfying click to them and it’s a shame this is missing from the crown, especially since it’s the one you press the most. However, we did like the fact that you can set the two flanking buttons up as handy shortcuts to trigger whatever you want.

Silky performance most of the time

Inside the Fossil Q Explorist, there’s a Qualcomm Snapdragon Wear 2100 processor backed by 512MB of RAM. Navigation was generally silky smooth and it’s reasonably fast to load apps and games. Compared to older smartwatches it’s fast, compared to a flagship phone, or the latest Apple Watch, it feels a little sluggish. The Wear 2100 processor is a little dated now, and we really hope to see a new chipset soon.

Since it runs Android Wear 2.0, you’ll use the Android Wear app for Android or iOS to pair your smartphone. The watch can also download apps directly via the onboard Play Store and there’s 4GB of storage to fill. Connectivity is via Bluetooth 4.1 or Wi-Fi 802.11 b/g/n and notifications are accompanied by a gentle buzz that’s just right. There’s no NFC here, so you can forget about making contactless payments with Android Pay.

As an Android Wear 2.0 smartwatch, the Fossil Q Explorist will automatically track your activity via Google Fit, so you can set daily goals, track steps taken and calories burned, and record workout sessions. It is IP67 rated, so there’s no need to fear rain and you can wear your Fossil Q Explorist in the shower or during a short swim if you really want to.

Fitness fans may bemoan the lack of a heart rate sensor and GPS. Truthfully, the Fossil Q Explorist is far from a full-fledged fitness tracker, but it’s not really trying to be and we think it offers enough for most people.

It’s easy to incorporate the fitness data into your watch face, and there are plenty of fun, futuristic, and traditional options to choose from. You can swipe left or right to switch between watch faces on the Q Explorist or dig into a larger selection via the Android Wear app on your phone. We mostly used the Fossil Classic watch face as it struck a nice balance — showing date and time, with a sweeping second hand, alongside steps, fitness goal progress, and battery life.

You get a couple of games preloaded on the Fossil Q Explorist, but they’re a waste of space. It’s hard to imagine why you would play them – maybe if your smartphone was unavailable. There’s also a flashlight option that lights up the watch face, as well as standard utilities like the alarm, contacts, and stopwatch.

The Play Store isn’t exactly bursting with great options for smartwatches, but we found Bring! quite handy for shopping lists and AccuWeather was better than the default weather app.

You can also use Google Assistant through the Fossil Q Explorist by holding down the crown. It’s handy for quick searches or dictating text messages if you’re paired with an Android smartphone.

We tried the Fossil Q Explorist out with an iPhone 8  for a few days, before switching and pairing it with the Sony Xperia XZ1 Compact. Unfortunately, there was a big difference between the two.

If you have an iPhone, then you’ll get most notifications on your Fossil Q Explorist, but you won’t be able to act on them. You can’t reply to text messages or handle calls, for example. You have to keep the Android Wear app open in the background, and if not the iPhone will frequently disconnected. But worst of all, the battery life was abysmal.

We had to factory reset the Fossil Q Explorist to unpair it from the iPhone 8 and pair with our Android phone, which meant setting it up completely from scratch (this is something you have to do with all Android Wear watches).

Once we paired the Fossil Q Explorist with the Sony Xperia XZ1 Compact, it was plain sailing. We could answer calls, respond to messages, and it stayed paired. Battery life was noticeably improved as well.

As much as we like the Fossil Q Explorist, silly moniker aside, it does harbor a major glaring weakness and that’s battery life. Fossil said the wearable has an “estimated 24-hour battery life.” But then there’s an asterisk before the admission that, “battery life varies based on usage.”

The only way you’re going to get 24-hour battery life from this smartwatch is if you barely use it.

We were surprised to find an uptick in battery life when we switched to an Android phone. Ostensibly the Fossil Q Explorist was actually doing more, so the fact that battery life was better with the Xperia points to an issue with the iPhone connection.

The December update to Android 8.0 Oreo for Android Wear brought some improvements to battery life, with more control over app alerts and better background limits. There’s also a battery saver option now, though it inevitably reduces vibrations, connectivity, and some other bits and pieces. Even with the update, daily charging is a necessity.

Incidentally, the circular charger provided is very weakly magnetic, so it slips off far too easily. Charging time seems to average around three hours, so you’ll want to get into the habit of setting it to charge while you sleep.

You can get yourself a Fossil Q Explorist, with stainless steel strap, for $275. If you go for a leather strap instead then $20 drops off the price. It’s available from Fossil’s website.

Fossil offers a limited two-year warranty that covers defects in material or workmanship. It doesn’t cover your strap, any accidental damage, or water damage.

The Fossil Q Explorist is a reasonably priced, stylish, Android Wear 2.0 smartwatch, that’s easy to recommend if you plan on using it with an Android smartphone — iPhone users should move along.

If you use an iPhone, then it’s going to be hard to look past the Apple Watch, particularly since it starts at $330. If you use a Samsung Galaxy phone, then the Gear S3 might be your best bet at around $350. Anyone who wants to stick with Android Wear should check out the Huawei Watch 2 at $300.

Those are the top competitors in terms of tech, but fashion fans may be prepared to pay a bit more for something like the Movado Connect, which starts from $595, the Emporio Armani Connected, from $345, or the $350 Michael Kors Access Grayson  and Sofie.

Even with the weaknesses, however, we think the Fossil Q Explorist compares favorably with the rest of the field. It is one of the best, if not the best option, for men seeking value without compromising on style.

The Fossil Q Explorist is going to continue to look good for years to come, but the battery will degrade over time and software updates are liable to tail off after two years. They may look like traditional watches sometimes, but smartwatches are very much part of the tech world and sadly that means limited longevity.

Yes, if you want an attractive smartwatch to use with an Android phone that will blend in at work or play at an affordable price, we don’t think you’ll find a better option than the Fossil Q Explorist. The lack of NFC, GPS, and heart rate sensor is reflected in the price. If you’re okay with a heavy watch and a daily charging routine, it’s worth buying.

Update: We’ve updated the battery section after a December update bringing the watch to Android 8.0 Oreo.

Topics
Video-editing app LumaFusion to get a Galaxy Tab S8 launch
This ridiculous smartwatch has a hidden pair of earbuds inside
Sunbird looks like the iMessage for Android app you’ve been waiting for
The best Samsung Galaxy S22 Ultra screen protectors for 2022
The Galaxy Z Flip 5 might fix the Flip 4’s biggest design flaws
Best Cyber Monday Smartwatch Deals: Apple Watch, Fitbit, Galaxy Watch
The best iPhone games to play in December 2022: Marvel Snap and more
I thought iOS 16 would ruin my iPhone 8, but it shocked me
The best Android games available right now (December 2022)
The most innovative tech products of 2022
How to unlock a phone on every carrier in 2022
This retro battery pack is way cooler than it has any right to be
Apple Health vs. Samsung Health? What I learned after using both