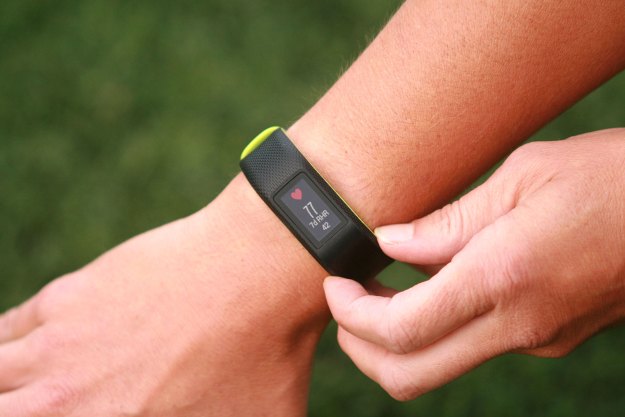 “The Vivosport is the best fitness band we’ve ever tested.”

There was a time when we would have been perfectly happy with a fitness band that counted steps, calculated calories burned, and vibrated to wake us up each morning but in these data driven days, we’re all asking much more of our fitness technology. We want GPS, smart notifications, heart rate monitoring, and cardio and weight training tracking, and we want it all in something small. Well, Garmin’s new Vivosport delivers on all of the above — and that’s exactly why we walked away so impressed.

From the outside, the Garmin Vivosport is a classic, minimalist fitness band that looks very much like what it is — the offspring of Garmin’s original Vivofit and Vivosport bands. The Vivosport features a two-tone silicone strap with a watch-style buckle closure and locking loop. It comes in three colors: slate, black/fuchsia, and black/limelight and two sizes, small/medium and large. Its vertical 9.7 by 19-millimeter LCD color touchscreen has a resolution of 72 x 166 and there are no buttons … anywhere. All interaction with the Vivosport is done through the touchscreen and Garmin’s free Connect mobile smartphone app.

On the inside, the Vivosport packs GPS, barometric altimeter, an elevate optical heart rate monitor, an accelerometer, and Bluetooth and some ANT+ connectivity. This allows Vivosport to track basic quantified life metrics like steps, calories burned, floors climbed, distance traveled, plus sleep time and quality. It records cardio and strength training indoors including automatically counting sets, reps, and the monitoring of heart rate.

Don’t be fooled by the small package — Garmin’s Vivosport is a full-featured GPS smartwatch tucked into a fitness band.

With built-in GPS, the Vivosport logs activities like walking, running, and cycling metrics such as speed, distance, elevation, and full mapping even when not connected to a smartphone. Thanks to ANT+ it broadcasts heart rate data to other connected devices (like a Garmin Edge cycling computer), however, Vivosport cannot connect to other sensors for cycling cadence and power, or to heart rate chest straps. When connected by Bluetooth to a compatible smartphone, the Vivosport delivers full smart notifications, controls music on the phone, and helps locate a lost phone by making it chime. In addition to showing the time day and date in either portrait or landscape orientation, the Vivosport has a stopwatch and countdown timer.

The craziest thing is that Garmin was able to squeeze all this tech into a band that weighs only 27 grams and is water resistant to 5 ATMs. The Vivosport may look and feel like a simple fitness band but its onboard tech puts it on a par with many larger, more expensive smartwatches.

While previous Garmin fitness bands could be used directly out of the box by pairing with Garmin’s Connect mobile app via Bluetooth, the Vivosport requires a USB power cord connection just to turn it on for the first time (there is no way to turn it off). Once powered up, we paired it with our smartphone via the Garmin Connect mobile app. The app walked us through every step, including a practice session of all the touchscreen taps and swipes we’d need to perform to get at the Vivosport’s deep function set. Garmin’s Connect mobile app improved so much over the past three years that even first timers will find it simple to get it up and running.

Last summer we wore Garmin’s top-of-the-line Fenix 5X GPS multisport watch as our everyday timepiece (and loved every minute of it). So, we were worried the tiny Vivosport would leave us feeling lost without all the big watch’s functionality. What the Vivosport taught us is that we rarely used many of the Fenix 5X’s functions and the ones we used most (like walk, run, and cycling GPS tracking, smart notifications, and vibration alarms) were all included in the tiny Vivosport. It was also a relief to get back to a band that didn’t feel like we had a rock strapped to our wrist 24 hours a day.

The Vivosport’s simple iconic menu system is well designed but it took some time before we felt totally at home. With all the tapping and swiping it took to get around it, we occasionally felt like we were sending messages in Morse code instead of getting ready for a workout. Beginning an activity required a long press on the touchscreen until the activity icon appeared, then a swipe to the right and a swipe up or down would select one of the included activities (walking, running, cycling, cardio, weight training, or other).

Once the activity was selected, the Vivofit asked us to wait while it found the GPS satellites. The wait was usually under a minute which wasn’t exactly snappy, but workable. When the GPS was on lock, it took a double tap on the screen to start the activity. During the activity, the Vivosport displays two metrics at a time and the data screens can be swiped to get to two more metrics. If the stock settings aren’t right, they can all be customized in the Garmin Connect mobile app. At the end of an activity, two quick taps on the screen stops the recording and the Vivofit ask if the activity should be saved. A simple tap on yes and another tap to save and the activity saves and uploads to Garmin Connect mobile and the Garmin Connect website during its next sync.

For indoor workouts, the drill was much the same. In weight training mode, the Vivosport counts sets and reps. When a set is done, a tap on the screen’s right arrow starts a rest timer and (as expected) it took a tap again to start set two. The counter tracked most of the sets we threw at it, working for most weight lifting motions, and counted sit-ups, push-ups, and other aerobic reps. If the tally was a little off at the end of a set (which we found it to be sometimes), we were able to manually edit the number of reps during a rest — keeping digital track of gym workouts has never been easier.

The best backlight in Garmin’s lineup

For everyday wear, the Vivosport worked perfectly and became our favorite fitness band so far. The vibration alerts — which can be adjusted to three different settings (low, medium, and high) — worked nicely for smart notifications and the small screen was surprisingly readable for its size, even in bad lighting conditions. In the dark, the automatic backlight worked fine most of the time, though when it didn’t, a simple tap would bring it on.

The backlight is one of the brightest we’ve seen on any Garmin watch or band. We were occasionally surprised when the backlight came blasting on like a searchlight — not a problem if you’re home alone but could be a bit of a distraction in movie theatres, plays, or other dark places. The backlight also stays on during charging, so we had to cover the Vivofit with a shirt when we charged it at night to keep it from lighting up the room. Luckily, the brightness can be adjusted to seven levels and the timeout can be adjusted in three different lengths.

It still has a few minor hiccups

In our month with the Vivosport, we were only annoyed by one thing — the touchy touchscreen. Functions would often be triggered when we were tucking in our shirt or putting a hand in a pocket, but where the Vivosport’s touchscreen really went wild was in the water. Be it splashed or submerged, the Vivosport would burst into a flurry of uncontrolled activity every time we got it near water.

During one shower, without knowing it, we gave ourselves a stress test, checked our heart rate, and started a run all without even touching the Vivosport. Then on getting out of the shower, we had to stop the activity and delete it so it wouldn’t automatically upload our shower run to Garmin Connect and blast it out to followers of our connected Strava account. We thought we’d solve this by turning on the Vivosport’s touchscreen lock.

With the lock turned on, touchscreen functionality is turned off until the display is tapped twice. After the taps, it operates as usual. Problem is, when we went to check the time at night it requires a triple tap — twice to unlock, and once to sweep away the menu that tells us to “double tap.” Also, when a notification arrived at night, one tap showed the notification without turning the backlight on. Then by the time we tapped it enough to get the backlight on, the message was gone. Eventually, we resorted to running the Vivosport with the touchscreen lock off and simply removed it before we got in the shower.

Garmin says the battery lasts for eight hours in GPS mode and up to seven days in watch mode. In reality, it ends up more like this: by using the GPS each day for one or two hours it needs to be charged every other day. When the GPS is not used at all, the watch seemed to stay pretty well charged for up to five days before we needed to plug it in. But, because the battery is so small, it didn’t take very long to charge.

Don’t be fooled by the small package. Garmin’s Vivosport is a full-featured GPS smartwatch tucked into a fitness band. It’s light, attractive, snappy and features everything most anyone needs for tracking all around fitness metrics. Sure, there are fitness watches that offer more specific fitness tracking and planning for dedicated runners, cyclists, and adventurers, but when it comes down to the basics, we believe this is Garmin’s best fitness band ever.

The Vivosport is a bit of a fitness tracking gateway drug. It does everything the average person needs to track exercise, manage fitness, and keep up with notifications on their smartphone. Those who want to take their fitness tracking to the next level, however, will need a watch that can connect to more sensors. Runners who like the precision and reliability of a heart rate chest strap, or foot pod data might be better served with a Garmin Forerunner. Cyclists who want to track cadence and power metrics would likely prefer a Garmin Fenix 5. We have access to both the Forerunner and the Fenix, and we still enjoyed the Vivosport as a day-to-day watch because of its solid GPS feature set and how light and comfortable it was to wear.

The Vivosport is in no danger of becoming obsolete any time soon. Garmin is constantly upgrading their device software and with all the sensors built into the Vivosport, we wouldn’t be surprised if Garmin upgrades some of the features in future software updates that make it even more of a stealth smartwatch.

Yes. The Vivosport is the best fitness band that we’ve tested. We believe it’s just as valuable for those starting out with fitness tracking as it is for athletes who want something smaller that they can wear every day. At $200 we can’t think of anyone who would be disappointed with the features, functionality, and form of the Vivosport.