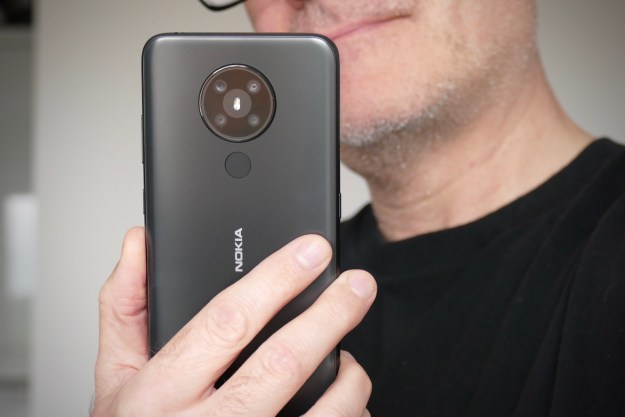 “The Nokia 5.3 delivers everyday performance, as well as future-proofed software, for a great price.”

Highly capable smartphones that cost $400 will do everything many people would want from a mobile, but what about phones that cost half that much? HMD Global’s Nokia 5.3 costs just $199, or 149 British pounds, yet after using the phone for a week, I can safely say it doesn’t feel like you’re halving the quality and ability of a more expensive model — in most areas, at least.

The Nokia 5.3 will surprise you with its features, software, and overall ability as an everyday smartphone. No, the camera and the screen aren’t up there with the best models, but you shouldn’t expect them to be. Buy the Nokia 5.3 knowing what it can and can’t do beforehand, and you’ll get one of the best smartphone values I’ve seen in a while.

The rear panel on the Nokia 5.3 is made from a composite plastic material which is grippy but lacks a pleasant texture. It also has some flex to it and curves around the side to meet the plastic frame, which then leads into the 6.55-inch screen. The phone is 8.5mm thick and weighs only 185 grams. It’s manageable in the hand, but is wide, so owners with small hands may find it ungainly.

In addition to the volume rocker and SIM tray, there are two other buttons on the Nokia 5.3’s body. The power button is an obvious necessity, and it sits below the volume rocker. It has a notification light built into it that is bright and noticeable, and it pulses when you have messages waiting for you on the phone. This is useful in the absence of an always-on screen, plus the positioning is unusual and eye-catching.

The second button feels superfluous. It’s on the opposite side and calls Google Assistant up. I often pressed it by accident when picking up the phone or juggling it with one hand. It’s annoying, as it adds several extra steps when trying to unlock the phone, or takes extra seconds to cancel at other times. There is a way to turn the button off, but no way to reconfigure it to something more useful. Nokia has added a 3.5mm headphone jack to the phone and a single speaker at the bottom. It has plenty of volume, but no bass, resulting in a harsh and tinny sound.

On the back is a quad-sensor camera module that protrudes very slightly from the body and is set above a fingerprint sensor. The design is not dissimilar to many other phones from the last few years, including the OnePlus 7T and the Poco F2 Pro, and is attractive in an inoffensive way.

This phone doesn’t look like it costs $199, and that’s the big takeaway here. You’re not getting an ugly phone that screams “cheap” when you pick it up or look at it, but rather an understated and well-balanced design. I suggest you buy the Nokia 5.3 in either the cyan or sand color, rather than the boring charcoal color of my review model, to give the phone a boost in appeal.

The 6.5-inch IPS LCD screen on the front shows where money was saved. The resolution is 1,600 x 720 pixels, meaning it’ll play YouTube videos at a maximum of 720p, and while this is all perfectly acceptable for a phone at this price, I found it suffers from a lack of brightness. I had to crank the brightness up to full most of the time, and even then it’s difficult to see in bright sunlight. The auto brightness feature is annoyingly haphazard too, rarely settling on a single level before fluctuating again, and never to the right point.

There’s a teardrop notch with the selfie camera at the top of the screen, and a small chin bezel with Nokia branding on the bottom. Provided the brightness is maxed out and the intrusive Night Light feature that reduces blue light is turned off (it messes with the colors too much, especially during scrolling), the screen is fine for everyday use. Just don’t expect it to be a media powerhouse.

You can expect it to be satisfactory, though. The low resolution means detail is lacking, but I found the screen has a very cool color palette on default settings. It does cry out for more brightness, and some video can lack life and vibrance. However, this isn’t really what the phone is for, and the Nokia 5.3 is fine for casual viewing. I also like that the screen is massive, so you don’t feel like the low price has led to any other visual compromise outside of the resolution.

Even phones that cost $199 have four lens camera sensors these days, but they shouldn’t. The Nokia 5.3’s main camera has 13-megapixels and an f/1.8 aperture, and is joined by a 5-megapixel ultra-wide, a 2-megapixel depth sensor, and a 2-megapixel macro lens. The selfie camera inside the teardrop notch has 8 megapixels.

It’s functional, but not inspirational. Like the screen, expectations need to be tempered, as it’s inconsistent and rarely took a photo I’d want to share without editing. Neither the wide-angle or the standard lenses get the lighting right every time, either overexposing or underexposing a shot, and the dynamic range varies greatly between the two as well. Macro shots are as underwhelming as you’d expect from a 2-megapixel sensor.

There is a Night mode, but the shots it takes are only marginally better than those taken without it, and a Portrait mode as well. Edge detection is decent, but you do have to wait around for the camera to process the shots. Flip to the selfie camera and the results often suffer from looking washed out in bright conditions, but indoors the results are acceptable.

Couple all this with slow software, and the Nokia 5.3’s camera is a disappointment. This is a cheap phone, and it’ll never take on the very best when it comes to the camera, but there should still be a standard to maintain. Speedy software and consistent performance is needed at any price point. I’d rather have a single lens camera that takes good photos than a quad-lens camera taking mediocre photos.

The Qualcomm Snapdragon 665 processor with either 3GB, 4GB, or 6GB of RAM powers the Nokia 5.3. My review phone has 4GB, and handles tasks like social networking apps, messaging, and calls without a problem. Do anything more intensive, which includes using YouTube, and speed can suffer. For example, switching from landscape to portrait orientation takes a few seconds to complete, and exiting power-hungry game apps results in a lengthy pause while the phone sorts itself out.

The benchmark tests are as follows:

It’s the same chip used in the Motorola Moto G8, the Moto G Fast, and the G Power, and the results are similar. Think you won’t be able to game on the Nokia 5.3? Think again. No, it’s not an ROG Phone 2, but I played Asphalt 9 Legends happily enough. Sure, it’s not the smoothest experience, but it never devolves into a situation that makes it unplayable. Playing through 1945 and Hill Climb Racer was fine, too.

The Nokia 5.3 is an Android One phone. This means the software is similar to the Google Pixel phones, with no special user interface, additional apps, or other alterations to Google’s basic Android style. Android One also ensures regular and timely software updates, and the phone will receive Android 11 when it arrives, plus be updated for the next two years in total. This is a serious selling point, and makes sure your cheap smartphone purchase won’t be out of date in the near future.

It runs very smoothly apart from a few performance-related stutters, and I like that it has a Dark mode and comes with NFC for Google Pay as well. Again, this is another major advantage as some competing devices do not have this feature at all.

The 4,000mAh battery, paired with the low-resolution screen and mid-level processor, gave me high hopes for the Nokia 5.3’s battery life. In reality, it wasn’t anything better than most other phones, regardless of specification. I’ve been testing the Nokia at home for the most part, and therefore it has spent most of its time connected to Wi-Fi.

Average use for me includes social media, some photos, some video and voice calls, plus messages and a little gaming. The Nokia has lasted almost two full days, but only provided the second day is less intensive than the first. Video also puts additional strain on the battery. Charging is wired only, and there’s no fast charging here either.

Security is exactly what you want: A simple yet secure fingerprint sensor on the back of the phone, and face unlock for convenience, both of which are fast and mostly reliable. However, the rear fingerprint sensor didn’t work well with wet fingers. It does have a handy feature where a swipe down on it will pull down the notification shade on the screen.

The Nokia 5.3 can be purchased in the U.S. for $199 through Amazon. In the U.K., it costs 149 British pounds and is available from Nokia’s own online store, as well as through Amazon and Argos.

Warranty in the U.K. is for two years for the device, but only one year in the U.S..

There’s a danger when reading this review that you’ll think the Nokia 5.3 isn’t worth buying. I’ve pointed out its downsides, just as I do with any phone, but it’s important to put them into context. The Nokia 5.3 costs $199, it does everything you could want from a smartphone, and it even does some things quite well. You can find much better phones, but at the same time, the Nokia 5.3 can easily handle what most people need a phone to handle.

It’s refreshing to find that $199 buys you an attractive, modern smartphone that plays top games, runs all your apps, and has enough power and battery to be a trusty everyday companion. Just be prepared for it not to excel in photography or display quality, like you would expect from a $700-plus model.

For $199? The choices are slim. Take a look at the Motorola Moto G Power for $249 or the $199 Motorola Moto G Fast if you want similar alternatives. However, to truly buy a better phone, you’ll have to spend a lot more. We recommend the $399 Apple iPhone SE, the $500 Poco F2 Pro, or the $600 OnePlus 8. Google has discontinued the Pixel 3a, but if you can still find one, it’s a solid purchase.

The Nokia 5.3 does not have water resistance, but the composite rear panel is scratchproof. HMD Global also promises software updates for the next two years, thanks to the Android One platform, and this is a significant benefit over the Motorola alternatives. Provided you don’t expect your own phone use to change, the Nokia 5.3 will last all of the two-year guaranteed software update period without a problem.

Yes. Don’t get caught up in the negatives, and instead be happy that $199 buys you a capable everyday smartphone.