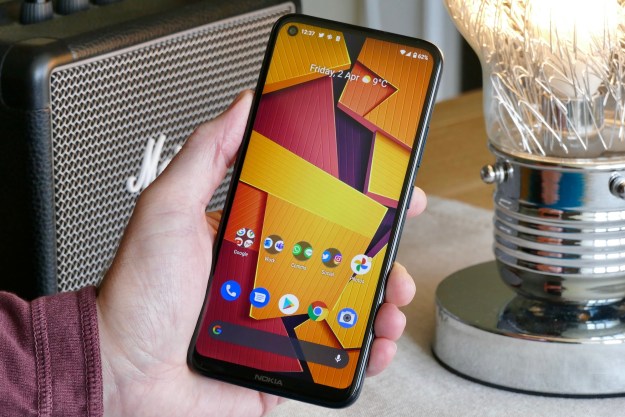 “The Nokia 5.4 hasn't improved over its predecessor, but the price has increased, and some further problems have come along for the ride. It's not the phone to buy.”

The $249 price tag attached to the HMD Global Nokia 5.4 makes it leap off the page in this time of flagship smartphones costing $1,000 or more. But look closer and it’s actually $50 more than the Nokia 5.3 it replaces. Now that it’s more expensive, it needs to provide evidence that it’s worth the extra by improving on the specifications of the old model and curing some of the issues it had too.

In reality, the Nokia 5.4 isn’t all that different from the Nokia 5.3, and that’s not great news. Let’s go into more detail.

From the back, the Nokia 5.4 looks very similar to the Nokia 5.3 and many other Nokia phones. It has a circular camera module at the top, a fingerprint sensor underneath, and on my review model, a pretty blue color scheme called Polar Night, which looks great in the right light. The phone is made of plastic and can get quite greasy with fingerprints. It should prove quite hardwearing though, but it’s not water-resistant.

At 181 grams it’s not very heavy, and the body is modestly sized but quite wide. I can just about use it with one hand, but my thumb barely stretches across to the other side of the screen. Swipe typing is possible though. In addition to the usual volume rocker and power button, Nokia has fitted a Google Assistant button to the left-hand side of the device. While it can be deactivated if you don’t want to use it (or like me, keep pressing it by accident), there’s no way to reconfigure it. It’s unfortunate, and it makes the button feel like a waste of space.

I kept coming back to the question of desirability because the Nokia 5.4 looks basically the same (from the back) to the 5.3, and that was released this time last year. It’s not ugly at all, and I like the Polar Night color a lot, but it would have been nice if it wasn’t just a facsimile of the last one. From a materials and design perspective, the extra $50 you’re spending isn’t evident here, and the recycled design makes it a little dated.

No, this isn’t the latest iPhone and because you’re not spending $1,000, design perhaps isn’t something that will sway your decision to buy one. However, for a workhorse, or a first phone for someone young, it’s a pretty enough and a very solidly built phone.

The extra $50 isn’t going to get you a better screen either. It measures 6.39-inches, so is a little smaller than the Nokia 5.3 but has a 1560 x 720-pixel resolution for the same pixel density. However, it’s even less bright than the Nokia 5.3, with a maximum of 400 nits. It’s very dim, and it really suffers because of it. Looking at it in sunlight, or just outside generally, at almost any angle apart from face-on is a waste of time. It may as well be turned off.

In the real world, this means it is awkward to take photos because you can’t see the viewfinder. If it’s used for Google Maps in the car any hint of sunlight means the screen’s content disappears, and notification alerts on the lock screen are essentially invisible. The screen is on maximum brightness all the time, but you’d be forgiven for thinking it was on the lowest setting.

Indoors, the brightness isn’t quite such a problem, but the screen’s poor viewing angle is instead highlighted. It’s face-on with the Nokia 5.4, or nothing. Video performance is disappointing, with washed-out colors and a lack of vibrancy. The only good news is the teardrop cutout for the selfie camera on the 5.3 has been replaced by a hole-punch in the top left of the screen, which is a far better design choice, and makes the phone look more modern from the front.

This small point aside, the Nokia 5.4 has one of the worst screens I’ve used on a smartphone for a while.

Now we come to one of the areas where you find a specification difference which may have resulted in the increased price. The main camera has 48-megapixels, up from 16MP on the old version, but it’s still joined by a 5MP ultra-wide camera and a pair of 2MP depth and macro cameras. While the 48MP camera has a higher megapixel count, it still has the same f/1.8 aperture.

It’s not bad at all, provided you ignore the macro camera, which is useless as always. The main camera takes pretty photos in good conditions but can lack some color and pop, especially if the lighting is unfavorable. The wide-angle camera injects more color, but lacks some dynamic range resulting in more shadows. Portrait mode is decent too, with accurate enough edge recognition for it to be usable, and Night mode brightens things up provided it’s not too dark.

Overall, it’s a step up from the Nokia 5.3, and considering the price of the phone it won’t disappoint when taking casual shots on a daily basis. However, it can’t challenge the Pixel 4a’s excellent camera.

The Nokia 5.4 uses a Qualcomm Snapdragon 662 processor and comes with either 4GB or 6GB RAM, and either 64GB or 128GB internal storage capacity. My review model has 4GB RAM and 64GB storage. The battery has a 4,000mAh capacity. Frustratingly the phone has Android 10 and not Android 11 on board, despite being an Android One phone. Many will consider buying the Nokia 5.4 in the hope of timely software updates, so this is cause for concern. It really should have come with Android 11 installed from the beginning.

Performance isn’t great. There’s slowness throughout the operating system, with some apps taking several beats too long to open, and even key tap recognition suffering with frustrating pauses. Playing Asphalt 9: Legends reveals some slowdown and a low frame rate, as expected, but it runs well enough to play. I found the Wi-Fi range to be quite short and the connection sometimes unstable, and had continuous issues with WhatsApp video calls dropping out. The fingerprint sensor on the back is easily located with your finger, but it’s finicky and doesn’t respond well to either wet or very dry fingertips. There’s face unlock too, which is more reliable but a little slow.

The battery life you get depends on your activities. With basic use, it’ll last two days, but play a lot of games and shoot photos and it quickly drops to little more than a day. There’s no wireless charging and simple 10W wired charging. While I may have been spoiled using high-end phones recently, the Nokia 5.4 really did frustrate me quickly due to its ponderous performance when using it for day-to-day activities.

The Nokia 5.4 costs $249 without a contract from Nokia’s own online store, or through Amazon. In the U.K. it costs 159 British pounds, where it’s available through the same outlets. Both these prices relate to the 4GB/64GB model.

Looking back at how I felt about the Nokia 5.3, it was easier to forgive the phone’s downsides due to the low price in the U.S., and that it was more than a year ago when I used it. For the Nokia 5.4 to have essentially the same problems — lackluster performance and a poor screen — a year later is much harder to forgivable. That it costs more and still runs Android 10 makes it worse. HMD Global has revamped its smartphone range for early 2021, and the disappointing Nokia 5.4 shows an overhaul was needed.

Yes. If you’re set on owning a Nokia phone, wait to see how HMD Global’s new Nokia G10 and G20 phones perform. They are due for release in the next few months, and prices are similar to the 5.4. If you need a phone now, then consider spending a little more on either the $350 Google Pixel 4a, or the $399 Samsung Galaxy A52 5G. Both have better performance, screens, and cameras.

Alternatively, take a look at the $170 Motorola Moto G Play or $250 Moto G Power, depending on whether you want a big screen and long battery life, or just to spend as little as possible on a new phone. The Moto G Power is the better purchase if $250 is your limit.

The Nokia 5.4 isn’t waterproof, but the plastic shell should be hardwearing and moderately protective in the event of a small fall. Android One should guarantee software updates, but as Android 11 hasn’t arrived on the phone yet, you should be prepared for a wait for future versions to arrive. The phone will almost certainly outlast your patience for dealing with its issues.

No, the Nokia 5.4 may be cheap, but the phone’s downsides will still frustrate.