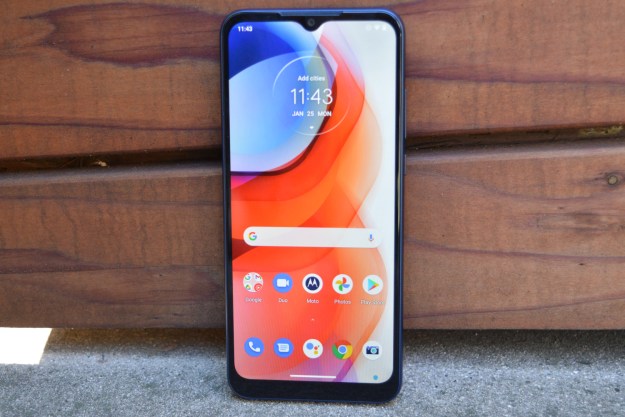 “Motorola makes the best phone under $200 — you just need to set your expectations before you buy.”

The phone, on paper, looks good. With a huge 5,000mAh battery, a relatively modern design, and more, it could be the go-to device for those who want a decent phone under $200. Is it though? I’ve been testing the 2021 Moto G Play for a while now to find out.

The Moto G Play is an inexpensive phone, and as a result, you shouldn’t expect to get an overly expensive looking design. That said, Motorola does a good job at still ensuring that the phone looks modern enough in an era of edge-to-edge displays.

Gone is the hole-punch cutout found on the more expensive Moto G models, in favor of a small teardrop notch at the top. Frankly, the notch is about as intrusive as the hole-punch cutout anyway, and you’ll forget about it soon after you start using the phone. The device also has a larger chin than the other Moto G devices, and that’s perhaps more noticeable. Neither of these are real issues, but they do contribute to the feeling that the device is a little less premium — which, you know, it is.

On the back of the device, you’ll get the dual-sensor camera bump, and a rear-mounted fingerprint sensor, which seemed fast and accurate in our testing. In 2021, given phones like the Galaxy S21, the camera bump on this device is quite small, and almost flush to the back of the phone, which is a nice touch. It’s also centered, so there’s not a lot of wobble on a desk.

Around the edges of the phone, you’ll get the standard volume rocker, power button, and USB-C port. You’ll also get a headphone jack, which is especially nice to see on phones in this price range.

The display on the Moto G Play is a 6.5-inch 720p LCD display, and it does the job, but that’s about it. Colors aren’t all the vivid, and there’s obviously no high refresh rate here, but for things like scrolling Twitter and reading emails, it’s perfectly fine. It also gets quite bright, which is helpful in direct sunlight or brighter environments.

The Moto G Play is equipped with a Qualcomm Snapdragon 460 processor, coupled with 3GB of RAM and 32GB of storage. It’s a noticeable step down from the other devices in the Moto G series, which come with 6-series chips and at least double the storage. 32GB of storage is a little weak in 2021, but somewhat expected on a phone this cheap. Thankfully, there’s a MicroSD card slot, so you can expand upon the storage if you want to.

Despite the slightly underpowered processor, the phone performs fine in day-to-day use. During basic tasks like emailing, browsing social media, and even some multitasking, there was little to complain about. Throw in more intense tasks, like mobile gaming on games like Call of Duty: Mobile, and you should expect some serious slow-downs, but despite the slower load times and the jittery menus, the phone still mostly handled itself in-game, albeit with the occasional skip.

All the devices in the 2021 Moto G series offer good battery life, and the Moto G Play is no exception. The device comes with a hefty 5,000mAh battery, and given the lower resolution display, it’s able to last two days of even heavy use. If you’re good at keeping your device charged up, you’ll never need to worry about battery life with this phone — and if you’re not, you’ll get plenty of time to plug it in. You do have to plug it in though — there’s no wireless charging, though that’s no surprise.

On the back of the Moto G Play, there’s a dual camera system, with one 13-megapixel main camera with an f/2.0 aperture, and one 2MP depth sensor. Despite the fact that great cameras on smartphones are getting cheaper, you still won’t get the versatility of an ultra-wide or telephoto camera on the Moto G Play.

Unfortunately, the camera on the Moto G Play is mediocre at best. In good lighting, you can take shots that are … fine. They’re not especially vibrant or detailed, but they’ll do the trick. Add a little complexity to the shot, however, and you won’t get much. Low-light photos are either overblown, super blurry, or both, and backlit scenes have little to no dynamic range.

If you weren’t aware that you were using a $170 phone, the camera on the Moto G Play will remind you — and it’ll remind you every time.

The 2021 Moto G Play comes with Motorola’s My UX built on Android 10, and it’s a pretty good experience. Motorola is pretty good at delivering a scaled-back software, and you’ll get it in this device.  Everything is pretty much where you would expect it to be, and the interface in general is easy to navigate.

Motorola has been pretty good at shipping extra features in its software, too. The phone comes with the Moto app, which enables some handy gesture controls — like the ability to take a screenshot by touching the display with three fingers, or flipping the phone upside down for Do Not Disturb. Other features, like Gametime, tweak things like notification settings while you’re gaming. The great thing about these features is that you can enable them or disable them depending on which features you actually like, and they’re all contained within the Moto app — instead of spread out through the My UX interface.

Now for the downsides (beyond the camera). The phone ships with the dated Android 10, and while Motorola has said that it’ll get Android 11, it still hasn’t said when. And, given the fact that Motorola’s marketing says it will get “at least one software update,” Android 11 is probably the end of the line for the 2021 Moto G Play. Thankfully, the device will get two years of software updates, but it’s still really disappointing to see such a lack of software support — which spans all of the Moto G devices.

Perhaps the best thing about the 2021 Moto G Play is how inexpensive it is. You’re getting a whole lot of phone for only $170. You can look past many shortcomings at that price, when you aren’t likely to hold onto the phone for very long in the first place.

The Moto G Play is available straight from the Motorola website, as well as some select retailers, like Best Buy. In fact, at the time of this writing, the device was available from Best Buy for only $120 if you activate with a carrier, which is an incredible deal.

The Motorola Moto G Play (2021) isn’t perfect, nor would you expect it to be for the price. The camera is really quite bad, and while the device’s performance is fine for most day-to-day use, it’s going to slow down in heavier multitasking and intense gaming. Because of that, if you can afford to spend more, you should. You can get the higher-level Moto G Power for $250. And the $350 Pixel 4a is more than double the price, but it’s also more than twice as good of a phone.

That said, if your budget maxes out at $200, then the 2021 Moto G Play is absolutely the way to go. Motorola continues to prove that you can get a solid phone at a super low price. So long as your expectations are set properly.

In this price range, no. The Moto G Play is the best phone under $200. If you can afford to spend more, however, you will get the exact same recipe, only better, with the new Moto G Power for $250. For a phone that will last longer, perform better, and take better photos along the way, you can step up to the Google Pixel 4a.

The Moto G Play should get you through two years of use, given the plastic build. It’s not water resistant, so you’ll need to keep it dry, and you should expect it to be seriously sluggish by the end of that two years.

Yes, but only if your budget maxes out at $200. $250 will get you a Moto G Power, which will perform better in every way.