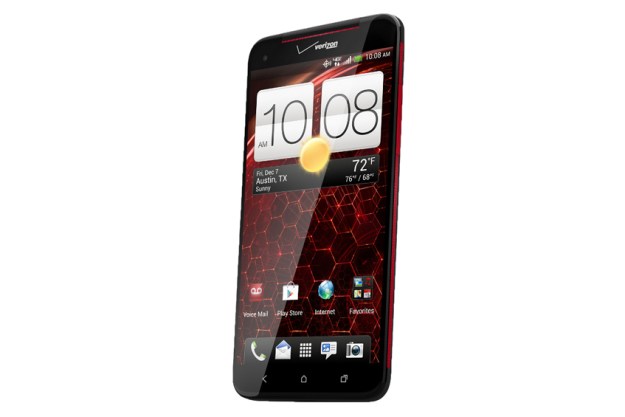 “If the Droid DNA is a glimpse at the phones coming in 2013, sign us up. HTC has managed to cram an amazingly dense 1080p screen into a 5-inch frame and do it without severely harming battery life or processing power. If you’re a Verizon subscriber, you’d be silly not to check this one out.”

Average smartphone consumers may not remember HTC, but in many ways, it never left us. It’s continued to offer top-notch smartphones at competitive prices. For one reason or another, though, the people began favoring the offerings of Apple and Samsung. The HTC Droid DNA is the company’s latest attempt to turn things around. As it has done for years with its Droid Incredible and Rezound phones, HTC has partnered exclusively with Verizon in the United States. The result: a pretty good phone with an amazing 1080p screen, and a few drawbacks.

There are many things you can fault an HTC phone for (and we will), but design is rarely one of them. Despite being drenched in black and veneered in red by Verizon, the Droid DNA is a good-looking phone. Following in the footsteps of the One X, the DNA is made of a durable polycarbonate unibody (it’s like plastic, but much stronger) and has a lovely Gorilla Glass 2 screen that appears to melt right into the edges of the phone.

With a full 5-inch screen, this is one of the largest smartphones on the market, but thanks to some thin bezels and edges, it should still be usable by most people. The back is about 9.7mm thick in the middle, tapering off to a scant 4mm on each of the two sides. This, along with a soft rubberized coating, allows for a good grip, much like the HTC 8X. Two red strips littered with tiny holes sit on each side of the phone. Though they may look like a speaker grill, they actually serve no purpose but to candy up the eyes of passersby.

You may not notice at first, but the red strip on the right side of the phone hides a volume rocker. Once you know where it is, you shouldn’t have too much trouble. I had a few issues relocating it when I wanted to adjust the volume of music playing without grabbing the phone out of my pocket (it’s a tight fit). The power button is in a more precarious position. Instead of placing it on the side of the phone, which HTC usually does on its larger phones, it’s been placed in the direct center on top of the phone. This is a somewhat annoying placement because, well, the larger your phone, the more difficult it is to stretch your fingers to reach different buttons.

Finally, if you have a short temper and no fingernails, you’re going to lose it when its time to recharge your Droid DNA. Verizon and HTC have chosen to include a Micro USB cover. The goal here is to make the phone more water resistant, and it’s a noble goal. Who wants a bunch of water leaking into their phone through a drafty USB port? Unfortunately, it’s also inconvenient. It can take a second to pry the little bugger off, and it takes another second to shove it back into place. That’s two seconds you’ll never get back. Your options are to lose those seconds, rip the thing off and risk a watery end to your Droid, or buy a different phone. The choice is yours, and yours alone. Good luck.

A little aside: The Droid DNA has notification lights on its front and back. The back light comes on when you have the phone plugged in, notifying you that a charge is commencing.

A screen with as many pixels as your TV

The number one draw of the Droid DNA is its 5-inch screen and 1920 x 1080 pixel Super LCD3 screen. With 440 pixels per inch (ppi), it is the most impressive screen we’ve ever seen on a phone. This phone has as many pixels as a high-end television. Put simply: it’s gorgeous. Some may not notice the difference, but to us, it’s the first screen that matches and exceeds the iPhone 4S and 5.

Thanks to some enhancements in smoothness brought on by Android 4.1 (Jelly Bean), this is one of the first Android phones to feel about as slick as an iPhone. Some users don’t notice fluidity and pixel density, and we’ll admit that it’s a luxury that you don’t “need.” But most people don’t need a smartphone either; it’s just nice to have. Once you’ve used a 1080p screen on a phone, you won’t love the idea of going back, especially if you like high-definition content. Video on the DNA looks mind-bogglingly clear. Many video games will benefit from the high-definition screen as well.

However, some issues have surfaced. Since the phone has to render more pixels, it takes more processing power to do it. As such, the Droid DNA isn’t going to break records where it relates to sheer power, because its screen uses most of that power. Some reviewers have noticed a few graphical glitches as well. We haven’t had issues like this, but the new resolution does apparently come with some quirks.

The Droid DNA runs Google’s Android 4.1 (Jelly Bean) operating system, though HTC has modified the look and feel of it with its “HTC Sense 4+” user interface. Android 4.1 has a few new features in it like Google Now (Google’s version of Siri), smoother performance, an enhanced notifications bar, a better camera app, and an upgraded keyboard. Unfortunately, you won’t see some of these updates because of HTC Sense 4+.

HTC Sense isn’t a bad user interface. It’s relatively easy to use and looks livelier than Android’s default design. However, here and there, HTC Sense will annoy you. For example, though this phone has a huge 5-inch screen with an incredibly detailed 1080p screen, HTC hasn’t updated its Sense UI to let you place more than 16 icons (4 x 4) on each of the five homescreens. This may not sound like a problem, but icons and widgets have a huge amount of dead space between them. What’s the point in having a higher resolution, if we can’t take advantage of it?

Being a Droid phone, the DNA is also packed with apps by Verizon’s partners. If you don’t like Amex Service, Reign of Amira (a game), NFL Mobile, Viewdini, Slacker Radio, Amazon, or Verizon apps, you’re out of luck; they are there to stay. Though deleting them is out of the question, you can “disable” them so they won’t run. Unless you buy a Nexus phone by Google, pre-loaded apps are a reality you’ll have to deal with.

HTC’s inclusion of Beats Audio is welcomed, however. While one can argue the true effectiveness of a filter like Beats, we found the audio quality of the Droid DNA while listening on headphones to be quite impressive. I’m jamming out to the new album by The Heavy (“The Glorious Dead”) as I write this.

A downside to the Droid DNA is its storage. While 16GB of storage doesn’t sound bad, there is no microSD card slot for expanded memory. If you use the Droid DNA to its limits and load it up with HD video, you’ll quickly run out of space. Apps are also taking up a lot more space than they did a year ago.

We performed a Quadrant benchmark test and achieved a score of about 8,100, which may be the highest score we’ve seen yet. It’s far above the 5,000 averages of the Galaxy S3 and HTC One X earlier this year, and it outperforms devices with Nvidia’s Tegra 3 processor. In the GL Benchmark Egypt Classic test for graphics, the DNA got about 57 frames per second. This isn’t as high as some devices, but it means that even with a high-resolution screen, most games should run at nearly 60 fps or more, which is impressive.

Call quality on Verizon’s network has been decently clear in Manhattan. We haven’t had an issue hearing or being heard. Verizon’s 4G LTE network is also as solid as ever. In a test today, we got an average of 16mbps on the download and 12-19mbps on the up. That’s faster than our Wi-Fi at home.

Overall, the Droid DNA is hobbled slightly by its amazing screen and lackluster storage, but remains one of the most powerful phones on the market and a new leader on Verizon.

Like most high-end HTC phones, the Droid DNA has a great 8-megapixel rear camera. This is thanks, in part, to HTC’s solid software and a special dedicated ‘ImageSense’ chip in the phone. The Droid DNA camera is near the top of its class. Unfortunately, it can’t quite top its biggest challenger: the iPhone 5. Outdoors shots on the Droid DNA come out with too much contrast and a slight yellow tinge (on a sunny day) when compared to the shots that come out of an iPhone. Indoors, the battle becomes more even, but overall, your shots will not look as good on the Droid DNA as they will on an iPhone 5. Obviously, there are exceptions to this, but it stands. Outside of the iPhone, we’d say that the DNA is highly competitive.

The 2.1-megapixel front-facing camera on the Droid DNA is also impressive. Like the front camera on the 8X, the DNA’s cam has a nice wide-angle lens, which will let you take vanity shots of not only you, but your vain friends as well. Or, for regular folks, the wide lens is great for Skype.

The Droid DNA’s screen looks cool, but it comes with a couple of downsides. Earlier, we spoke about the phone’s processing power taking a hit because of the upgrade in resolution. Battery life is similar. While it’s nowhere near as bad as first-generation 4G LTE phones like the HTC ThunderBolt, the Droid DNA’s 2,050mAh battery won’t match the life of the Galaxy S3 or iPhone 5. We have managed to make it a full day with moderate to heavy usage, but it cuts it close. The good news is that the phone does quite well while idling, so you won’t lose too much juice while the screen is off. We don’t think you’ll be hobbled by the battery life of the Droid DNA, but it’s not the phone’s sterling feature. If juice is what you dig, you may want to opt for the new Droid Razr Maxx HD.

If the Droid DNA is a glimpse at the phones coming in 2013, sign us up. HTC has managed to cram an amazingly dense 1080p screen into a 5-inch frame and do it without severely harming battery life or processing power. We wish that a microSD card was included, the power button wasn’t way up on the top, HTC Sense was gone, and that the battery life was better, but these are problems that plague other phones besides the Droid. Overall, HTC has created one of the best looking phones on the market before and after you turn it on. If you’re a Verizon subscriber, you’d be silly not to check this one out.