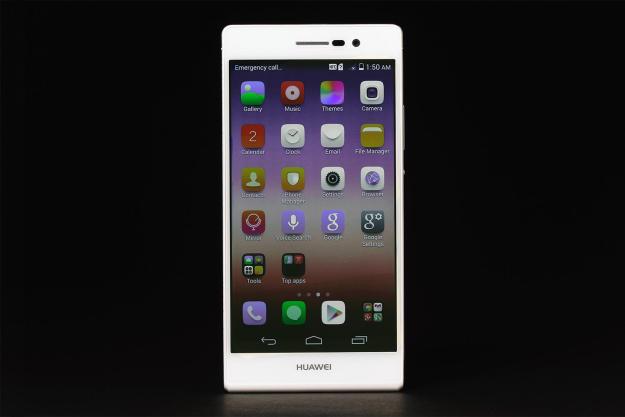 “With the Ascend P7, Huawei has finally made a really great smartphone that has the potential to woo iPhone users away from their 4-inch screens – if only it can make it out of Asia.”

Although most Americans don’t know it, Huawei is actually the third biggest smartphone manufacturer in the world, coming in behind Samsung and Apple. Its devices are usually well made with solid design and a premium feel, but they haven’t always been high sellers.

Now, with the Ascend P7, Huawei has finally made a really great smartphone that has the potential to woo iPhone users away from their 4-inch screens – if only it can make it out of Asia.

Huawei has made an effort to design the Ascend P7 in the likeness of an iPhone, but without plagiarizing it line for line. The metal band along three of the four edges looks almost exactly like the metal band surrounding the iPhone 5S. It even has the same polished edges that shimmer against a satiny finish.

On the other hand, the bottom edge of the phone deters from iPhone. It does not have the metal band and is rounded slightly, which gives it a look inconsistent with the rest of the design, but does feel nice resting against your palm.

If you set the Ascend P7 down on any table or flat surface, it will slide right off the edge and crash onto the floor.

The back is also solid glass, just like the iPhone 4/4S or a Nexus 4, and it has a cool mesh pattern that reflects light nicely, creating a sense of motion when you move the device around.

The only downside of this design is that it’s incredibly slippery. If you set the Ascend P7 down on any table or flat surface, it will slide right off the edge and crash onto the floor. Seeing as the device has a glass back, this is definitely not ideal.

Otherwise, the Ascend P7 looks pretty nice, if not a little boring and overly square. It does feel like a premium device when you hold it in your hand, though. The same cannot be said for Samsung’s Galaxy S5, which feels much more plasticky in comparison.

The square edges and glass back are also reminiscent of Sony’s Xperia Android phone lineup.

At first glance, you might think the Ascend P7 was running iOS 7. Huawei has removed the app drawer, flattened the icons, and added pops of color on top of Android 4.4.2 KitKat. Google’s OS is almost unrecognizable under Emotion UI 2.3. If it weren’t for the availability of widgets and the absence of Apple’s app suite, it would almost fool us…

… But not quite. Huawei’s interface is more brightly colored and a bit garish, especially if you go into the themes app and try out “Glare,” “Dream,” or “Colorful.” Each theme alters the color, shape, and style of the icons to suit a different aesthetic. If you frequently change your background and love redesigning your phone’s look often, you may find the themes fun to use.

Otherwise, the Ascend P7’s OS works just like it does on every Android phone, offering opportunities for customization and Google’s great suite of apps.

Huawei may not have given the Ascend P7 a Quad HD display, but its full HD screen with a 1920 x 1080 pixel resolution is awfully crisp. The display, which measures 5-inches diagonally and features very slim bezels, has a pixel density of 445ppi (pixels per inch). The colors are bright, if not a tad too bright, and it looks good from almost any angle.

The display size hits a real sweet spot for smartphones and makes those who use an iPhone regularly long for the rumored 4.7-inch iPhone 6. Thanks to the small bezels, the P7 is still easy to hold and operate one handed, though it can be a bit of a stretch to type with one thumb.

A decent processor and other specs

The Ascend P7 is powered by Huawei’s own1.8GHz quad-core processor, a Mali-450 GPU, and 2GB of RAM. It performs Web searches, handles videos, and downloads as well as any other mid-to-high-end smartphone out there. It may not be as zippy or smooth as the iPhone 5S, but it does well enough. In the Quadrant benchmark test, it got a 7,300. Compare this to the Galaxy S5 which has a 25,000. We’d say the Ascend runs about as well as a two-year old high-end phone. It will do the job, but it’s not impressing us.

The front-facing camera has a feature called “Beauty Level” that lets you adjust the aesthetic quality of your close up shot automatically. The higher the beauty level, the more airbrushed your face gets. We suppose this feature might make a few teenage girls happy, but everyone else will probably wonder what the point is.

The back camera takes high-quality photos and focuses on the subject quickly once you tap the area you want to highlight. When taking pictures under the bright, noonday sun, images can look washed out if you’re not careful.

The call quality sounded a bit odd, but the P7 didn’t drop any calls. We had no trouble hearing or being heard on the T-Mobile network here in New York City. The P7 is an unlocked phone, so you could use it on other networks and your call performance will vary based on the strength of signal offered by your carrier.

This is where Huawei’s dream falls apart. In order to make the Huawei Ascend P7 last through an entire 8 hour work day with battery to spare during the train ride home, you have to jump through several hoops and customize your battery savings settings like crazy.

If you don’t know the most popular tips and tricks for preserving a smartphone’s battery, you’ll run out of battery regularly with the Ascend P7.

If you don’t know tricks of the trade, you’ll need to recharge the P7 by dinner time.

During our tests, we had to enter the “Power saving” section in settings multiple times to figure out the best way to keep the device going all day. Huawei lists three different “Power plans” for users, including Normal, which will not get you through your day, Smart, which does actually work if you tweak a few other settings, and Ultra, which literally restricts the phone’s functions to voice calls and texts.

Once you’ve selected Smart, you’ll have to check which apps are draining your battery in the “Protected apps” section. There you’ll see a list of apps that are always running in the background, even when the screen is off. Huawei helpfully points out which apps are “power intensive,” so that you know which ones to turn off.

After we fixed all these settings, we found the P7’s battery life much improved. It even lasted through more than eight hours of normal use — as it should, given its large 2500mAh battery.

Many high-end phones have day and a half battery life this year, which puts Huawei at a big disadvantage.

Huawei has a real winner in the Ascend P7. It may not have the same ultra high-end specs as the LG G3, HTC One M8, Samsung Galaxy S5, or other flagship Android smartphones, but it offers strong performance and adds a nice build quality to the mix. The P7 also happens to be a couple hundreds of dollars cheaper.

The Ascend P7 is one of the best smartphones made by Huawei so far and it proves that the Chinese company has what it takes to make a true flagship.