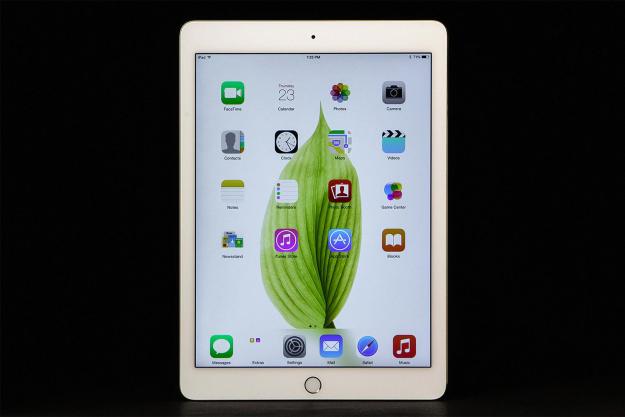 “Razor-thin, fast as hell, finger friendly, and now in gold: Apple’s iPad Air 2 is the best tablet you can buy.”

It’s thinner, faster, comes in gold, reads your fingerprints … and it’s an iPad. Android or Windows lovers may denounce Apple’s iPhones for a bunch of reasons, and plenty of them are valid, but when it comes to tablets, it’s hard to fault the king. The iPad Air 2 is the alpha male of slates.

No matter what your priorities when shopping for a new tablet this year — hardware design, comfort, interface, ease of use, app selection, or camera quality — the iPad Air 2 kicks more ass than any other tablet. It leads in all of these categories. The only area Apple can really be bested in is price, with the iPad starting at $500 and rising rapidly into the stratosphere. But thanks to the $400 iPad Air, there are options for those hoping to save money.

To know why we like the iPad Air 2 so much, read on. To skip straight to bashing me for being an Apple lover, the comments section is at the end of the review.

An iPad Air that isn’t full of air

If the first four iPads did P90X, they’d look like the iPad Air 2.

The iPad Air 2 (or iPad 6, if you’re counting) finally delivers on the promise of an air-thin tablet. You can’t get much thinner than this. Last year’s Air shed about an inch off its waist and weighed in at a single pound, losing a quarter of its beer belly. This year, Apple has shed its water weight. The new iPad is a quarter-inch thin and just 15 ounces. Damn does it look cut.

If you thought the 2013 iPad Air felt a little “airy” inside, you were right: The LCD screen was a distance from the glass and there was actual space inside its shell. This year, Apple mastered Tetris. It has fit the most components into the thinnest space imaginable. Holding the iPad Air 2 is so pleasant that it’s making us wonder why we loved iPad Mini-sized tablets more.

Thanks to the svelte new look, the high-resolution LCD screen looks more like a bright, colorful, moving magazine. It’s beautiful and has some of the deepest blacks (that means black that looks black, not just dark gray) we’ve seen on LCD.

As Peter Parker would say if he were a piece of consumer electronics, with great thinness comes great sacrifice. Apple claims it has kept its standard 10-hour battery life (and this appears to be the case), but we have lost a few things.

With a heavy heart, we say goodbye to the Mute/Rotation switch, which has been a staple of all iPhones and iPads since the dawn of iOS. This switch was a helpful quick toggle for the screen and sounds, and something few Android or Windows devices offered. The iPad Mini 3 still has one, but in the Air 2, it’s vanished in Apple’s attempt to liposuction nanometers. Thankfully, you can now lock rotation and mute in the Control Center, whch you pull up by swiping from the bottom of the screen. It’s not as fun as flipping a switch, but it gets the job done.

Speaker quality has gone down (again) with this new iPad too. Speaker sound on iPads peaked on the 3 and 4. Last year’s iPad Air had a notable decline in audio fidelity and this new iPad makes music sound more like a radio broadcast than a CD. You’ll want to invest in headphones or a Bluetooth speaker if you want clear audio. Compared to any other tablet, iPad Air 2 sounds good, but compared to its predecessors, music sounds tinny and flat, the audio equivalent of a blurry YouTube video.

But it’s not all sacrifice. The Air 2 does come with a fancy Touch ID fingerprint sensor. We’ll get to that soon.

And with great power…

Since we’re quoting Spider-Man, we should also note that the iPad Air 2 does have a significantly faster processor than the iPad Mini 3 or iPad Air. Apple’s new 64-bit A8X ARM chip really makes the Air 2 more of a Thor than a Hulk. Though it’s thinner than even the new iPhone 6 or iPad Mini 3, it’s far more powerful: The 3D Mark benchmark test clocked the Air 2 around 25 percent higher than the Air, breaking 20,000, and its Geekbench score is 4400 to the 2013 Air’s 2600.

No matter what your priorities — design, comfort, ease of use, app selection, or camera quality — the iPad Air 2 kicks other tablets asses.

Do these high scores matter? Not really. If you’re a fiend for processing power, you probably own a Microsoft Surface Pro 3 already. For the rest of us, the new iPad will stay speedy a year longer than last year’s iPad. Both of them play Angry Birds Transformers without lag. And if you haven’t played that game yet, check it out. It’s different than previous Angry Birds. It has Transformers.

The only major problem with the specs is the paltry 16GB of internal memory (10GB usable). Apple hasn’t raised this base amount in years, leaving all iPhone and iPad buyers shelling out $100 to upgrade to 64GB. And we highly recommend that you pay: If not, you’ll run out of space or encounter a 7GB iOS 9 upgrade in a year that you can’t find the room for. Apple is really gypping its fans here. Hey Tim! Cut the crap and kill the 16GB units next year!

For a full review of the teeny-weeny changes, read our iOS 8 review, but the addition worth noting is Apple Pay. By adding a credit card to the Passbook app, and adding a fingerprint sensor to the Touch ID security system, the iPad can make purchases online and in retail stores (if you have a cellular-enabled model, that is, which cost $130 more). We have no plans to take our iPad to the store to start buying groceries with, but judging by the number of people we see taking photos with an iPad, some of you probably will.

As always, we should note that the reason the iPad’s app selection is better than Android and Windows tablets is that Apple requires developers to make custom apps for it. There are more than 675,000 iPad-specific apps available. There are plenty of Android apps, but many of them aren’t optimized for tablets.

You will look goofy taking tourist shots of something with your iPad Air 2. You will. But you will take better shots than anyone else holding up a giant tablet.

The Air 2 has an improved 8-megapixel camera on its rear, much like that in the iPhone 6. In some early comparison shots, it appears a step above last year’s 5-megapixel shooter when it comes to low light and light balancing. Thanks to the extra megapixels, shots will have more detail as well.

The new camera can take better slo-mo and timelapse shots than older devices, and the 1.2-megapixel front camera will suffice for some grainy video chats or selfies.

But please, don’t start taking selfies with your iPad. It’s not natural.

Should you buy iPad Air or Air 2?

Apple is still selling last year’s Air for a $100 discount, which leads to the big question: Should you buy it? The frugal among you (and for a fan of Apple, that’s very relative) should have no hesitation buying this tablet. If you want the best iPad deal around, we recommend an iPad Mini 2 for $350 with a 32GB upgrade for an extra $100. 16GB isn’t enough! In fact, no matter what model you buy, pay extra to get the 64 or 32GB version.

If Apple Pay on the iPhone 6 is a wallet killer, the Air 2 is aimed squarely at purses and manbags.

What about the rest of you? The only additions to the Air 2 over the Air are processing power, gold coloring, that Touch ID sensor (and you don’t need that, honestly), and its thin new attitude. Are those upgrades worth $100? If they are, go for the best and latest.

If you’re searching for an Android rival, the best are Samsung’s Galaxy Tab S devices and Google’s new Nexus 9, we think — we haven’t tested that last product yet. Neither will save you much cash. There are boatloads of cheaper options, but you’ll sacrifice speed and app selection as you move down the ladder.

The iPad Air 2 is a worthy new iPad. It doesn’t reinvent the market, but it does perfect it. This is as close to Steve Jobs original vision for an iPad as we can imagine. It’s a fantastic tablet and outshines everything else out there in almost every meaningful way.

The downsides are the meager 16GB of memory, which won’t get you far, and its speakers. But even with these issues, the iPad Air 2 still outshines all rivals.

No full-size tablet is greater than the iPad Air 2. Let all others kneel before it — at least until next year.

Topics
Video-editing app LumaFusion to get a Galaxy Tab S8 launch
The best iPhone games to play in December 2022: Marvel Snap and more
Sunbird looks like the iMessage for Android app you’ve been waiting for
The best Samsung Galaxy S22 Ultra screen protectors for 2022
The Galaxy Z Flip 5 might fix the Flip 4’s biggest design flaws
The best Android apps for December 2022
Don’t listen to billionaires like Elon Musk — app stores are fantastic
The most innovative tablets of 2022
The most innovative smartphones of 2022
The most innovative smartwatches and wearables of 2022
These 6 things could make the Pixel 7a the perfect Google phone
Best Cyber Monday Tablet Deals: iPad, Amazon Fire, Samsung Galaxy Tab
Best Cyber Monday Smartwatch Deals: Apple Watch, Fitbit, Galaxy Watch