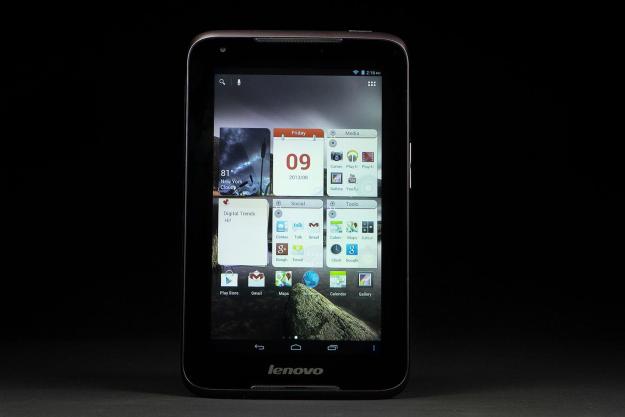 “The IdeaTab A1000's specs aren't so different from the original Nexus 7, but the poor hardware choices Lenovo made make this a bad purchase, even though it’s priced cheap.”

Not too long ago there was a hard line one could draw between tablets that are obviously crap and those worth your time and money. After the Nook tablets and Nexus 7 came along you could almost declare that buying a tablet under $200 was a bad idea. Now the threshold price is shifting and it’s hard too say what price is too low for value. The $170 HP Slate 7 is pretty terrible, but the $150 Asus Memo Pad HD 7 is pretty awesome. So where does the $130 Lenovo IdeaTab A1000 fall?

At that base price the tablet comes with a 7-inch display, 8GB of internal storage, a front-facing camera, a dual-core processor and 1GB of RAM. (Our review unit is the $150 model with 16GB of storage.) Not flashy, also not terrible. On paper, anyway. But specs never tell the whole story. Once we started using the IdeaTab it became clear that $130 might be too little money to pay for a decent tablet.

The IdeaTab A1000 doesn’t distinguish itself in the looks department (most tablets don’t, sadly). Except for the Lenovo logo on the front, it could be any 7-inch tablet on the market. The rounded edges make it comfortable to hold, and the 4.8-inch girth isn’t too wide to hold in one hand, though it’s not as holdable as the 4.5-inch wide Nexus 7. The slightly-too-heavy weight doesn’t help. All of the ports and buttons hang out near the top, including the Micro USB port. We like that the door to the Micro SD slot blends in almost seamlessly with the curve of the back plate and that all of the buttons are easy to find and press.

The tablet’s speakers face front and flank the display and deliver decent volume for a device this small. The placement helps – you’re not likely to cover them with your whole hand, even if you hold it in landscape orientation. Audio quality is about average for tablets and is good enough for watching short videos. If you’re into fiddling with equalizers there are Dolby Digital settings that allow you to make significant changes to the audio, but only when you plug in a pair of headphones.

The IdeaTab A1000’s display is unpleasant to look at.

If only watching video was a pleasant experience. The 7-inch display has a resolution of just 1024 x 600 pixels, which is not a problem in itself for a tablet at this price point, but comes with some seriously poor viewing angles. Tilt it even a little off center and colors distort or darken. Go wider and you’ll struggle to see anything on the screen. Not only does that impact sharing video with a friend or two, but the ability to see what’s on screen when the tablet is sitting on your desk just a few inches away and when playing games that utilize accelerometer tilt, like Temple Run. The combination of this plus the low resolution, glossy surface, and apparent gap between the glass and the actual display makes the A1000 actively unpleasant to look at oftentimes. Not a good thing for a tablet.

Lenovo continues to skin Android (version 4.1 here) with a not too heavy-handed user interface that adds some nice visuals but not much enhanced functionality. One thing we do like is that the three dots that indicate Menu settings is persistent on the bottom bar so you don’t have to hunt for it in each app. We also like some of Lenovo’s widgets, especially the folders. And the Notification drawer’s easy access toggles for wireless radios is very convenient. Other than a few other minor tweaks, Android is pretty close to stock – the skin isn’t as extensive as Samsung’s or HTC’s.

Most Lenovo Android tablets are chock full of pre-loaded apps, but not the A1000. Other than the apps that come with every device there’s a file explorer, FM radio app, UI intro and user guide. The company didn’t even bother tweaking stock apps like calendar, clock, or camera to put a distinctive stamp on them.

Why so few pre-loaded apps? It turns out there isn’t much room for them.

Why so few pre-loaded apps? It turns out there isn’t much room for them. Even though the A1000 comes with 16GB of internal storage, Lenovo partitioned the drive such that there isn’t much room for apps. Quick segue into slightly technical talk: every tablet reserves a portion of the internal storage for the operating system, pre-loaded apps, and app data. The rest is available to the owner for the apps, media, files, etc. added later. On a system with 16GB of storage, there should be plenty of room for apps and a bit of media. The A1000 gives you less than 2.5GB. Lenovo split up the internal storage, marking around 12GB as “USB Storage” meaning Android treats those gigabytes like an external SD card. You can’t put all app data on an SD card, thus the 2.5GB portion of the storage is going to get crowded. Fast. No downloading big games or more than a handful of normal sized apps. There is absolutely no reason for this, as far as we can see, and it unnecessarily hampers the tablet.

The IdeaTab A1000 runs on a 1.2GHz dual-core processor backed up by 1GB of RAM. This is a solid combo for a budget tablet that earned a score of 3,085 on the Quadrant benchmark. That’s in the same ballpark as the Asus Memo Pad 7 and the original Nexus 7, though lower by around 500 points. In our hands-on time we did note some sluggishness, though nothing crippling or too nerve-wracking. Simple games played fine, more complex games were too big to download.

Wireless radios include b/g/n Wi-Fi and Bluetooth 4.0. Though there’s a GPS toggle in the Notification drawer, there doesn’t appear to be a GPS radio. Nevertheless, the tablet accurately pinpointed our location when connected to Wi-Fi. No NFC, no surprise at this price, and no sensors beyond accelerometer and vibration.

Another element lost to cost cutting is a rear camera. The A1000 only sports a .3-megapixel front-facing shooter. The quality on this is so low that we wonder why Lenovo even included it. We took some noisy selfies that lacked sharpness and color accuracy. We wouldn’t even suggest video chatting with the tablet as you’ll just show up on your friend’s screen a dark, pixilated version of yourself.

The IdeaTab’s 3500mAh battery lasted between 6 and 7 hours with medium to heavy usage that included playing games and music, steaming video, and browsing the Web. This is decent for a 7-inch tablet and means you can get a whole day’s on-and-off use out of it. Still, it’s not nearly as good as the new Nexus 7 or the Asus Memo Pad HD 7.

It might be possible to put together a decent tablet at this price. Unfortunately, no company has yet proved this to be true. The IdeaTab A1000’s general specs aren’t so different from the original Nexus 7 or the Memo Pad HD, but the A1000 is a poor tablet user experience, rendering the low price a moot point. Performance-wise, there’s not much to complain about, but the severe lack of space for apps combined with a terrible display make the A1000 hard to recommend. Spend an extra $20 and get the Memo Pad HD 7 from Asus. If this is your exact budget, a discounted Nook HD is even a better choice (if it’s still in stock). You’ll get a far better experience on a different tablet.

Topics
Video-editing app LumaFusion to get a Galaxy Tab S8 launch
There’s a huge sale on Kindle e-readers happening today
I love (and hate) this stunning iPhone 15 Ultra concept
Apple hints at cunning plan to make you spend even more on an iPhone
Forget the Steam Deck — this modded Android phone is a gamer’s dream
The best wireless earbuds for 2023
TikTok should be expelled from app stores, senator says
Samsung Galaxy S23 Ultra vs. Galaxy S22 Ultra: is it time to upgrade?
The best Samsung Galaxy S23 Ultra cases: top 9 you can buy right now
Best Samsung Galaxy S23 and Galaxy S23 Ultra accessories
The best phones in 2023: which smartphone should you buy?
You shouldn’t buy the Galaxy S23 Ultra — and that’s the best thing about it
Netflix for books: Get 2 months of Kindle Unlimited for free