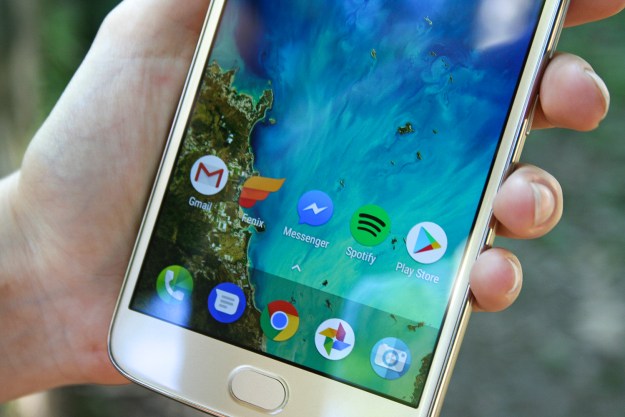 How do you stand out among a sea of devices all priced roughly the same, with similar spec sheets and features? It’s a question many budget phone makers have a difficult time answering – though we found Motorola did a pretty good job of it with the recently released $130 Moto E4. Just a few months later, the Lenovo-owned company has returned with yet another reasonably priced handset, starting at just $180 unlocked. In our Moto E4 Plus review, we found the phone to offer similarly compelling value, with one major benefit you’ll struggle to find anywhere else.

The E4 Plus is rather thick and hefty, with large bezels on the top and bottom. If you’ve seen the Moto E4, you’ve almost seen the E4 Plus. The major differences are the larger size and the back cover being made of metal, rather than plastic. It’s still removable, and underneath you’ll find access to the SIM card and MicroSD slots.

The phone feels big in the hand, but it’s not too unwieldy. The metal lends a high-end feel, and the volume rocker and power button are easy to locate on the right side. The fingerprint sensor is mounted below the screen like on other Motorola devices, and you can program it to serve double duty as the home button.

The display is adequate for a budget device. The E4 Plus’ LCD panel borrows the 1,280 x 720 resolution of the smaller model, but enlarges the screen from 5 to 5.5 inches. It looks surprisingly sharp on the standard E4, but at half an inch larger, it’s easy to see more pixels.

Considering what you’re paying, 720p is by no means a deal breaker, and the color reproduction and viewing angles are satisfactory. If you want a sharper screen, at only 267 pixels-per-inch, the E4 Plus isn’t going to impress.

When paying low-end prices, you typically have to settle for low-end hardware. While that may be true of the E4 Plus on paper, we were impressed how well the device performed in spite of its modest processor.

The Moto E4 Plus is among the best sub-$200 phones on the market.

The E4 Plus comes in two configurations. Both feature Qualcomm’s Snapdragon 427 system-on-chip alongside 2GB of RAM, though you have the option of paying $20 more for 32GB of internal storage as opposed to 16GB. There’s a MicroSD slot to expand storage, so you can house extra media, apps, and games.

Simply put, it exceeded our expectations. There are devices priced $100 higher, with more capable silicon that don’t feel as smooth and lag-free as the E4 Plus in most cases.

Some resource-intensive apps, like Google Maps, displayed occasional stuttering. While Super Mario Run ran flawlessly, you’ll have trouble running a graphics-heavy game like Need For Speed No Limit at an acceptable framerate. Those limitations were evident in some of the benchmark results:

The AnTuTu score is a little better than the regular E4’s 35,056, but still a ways off from the Moto G5 Plus’ 63,190, which starts at $50 more than the E4 Plus. If you’re a heavy gamer, or find yourself often jumping back and forth between recent apps, you’d be better served by the G5 Plus. Otherwise, the E4 Plus is one of the best performing devices at this price range.

The E4 Plus also offers one of the finest software experiences you’ll find among sub-$200 handsets. Motorola has always kept its Android customizations to the bare minimum, allowing a fresh, fluid, user-friendly experience. The E4 Plus continues this trend with zero bloatware atop Android 7.1.1 Nougat – just a couple convenient user interface options tucked away in the Moto app.

There’s the handy Moto Display that automatically shows the lockscreen when when you lift the device or pull it out of your pocket. It’ll show discreet notifications and provide shortcuts to the relevant apps when applicable. You can also activate Moto Actions for one-button navigation, eliminating the on-screen buttons so you can maximize all the available real estate of that large screen.

Like most of Motorola’s budget Android devices, there’s no NFC in the Moto E4 Plus, meaning you won’t be able to make contactless payments with Android Pay.

Two-day battery life – and then some

The design is fine, and the performance is respectable, but the humongous battery is the real reason you’d buy an E4 Plus. It doesn’t disappoint.

The battery will last you two days without even trying. Three isn’t out of the question.

At 5,000mAh, the E4 Plus’ battery does take quite a while to top off – three hours from completely empty, even with the included 10-watt charger. But in return, you get fantastic longevity. Combined with the E4 Plus’ power-sipping processor and display, the battery will last you two days without even trying. Three isn’t out of the question.

We watched YouTube videos, browsed Facebook, Twitter, and the web, streamed Spotify over Bluetooth for multiple hours, and could only kill 20 percent over half a day. At 36 hours off the charger, we were still a hair over 50 percent. Most phones that cost four times as much can’t even manage that.

Keep in mind, the standard E4 was no slouch in the battery department either. But with just a 2,800mAh unit, it’s absolutely blown away by its bigger sibling.

Like most other budget phones, there’s not a whole lot to say about the E4 Plus’ 13-megapixel rear camera. It tends to produce muted images in most scenarios, except when in the presence of the best lighting, and the lack of optical image stabilization leads to some unintended blur.

That said, the f/2.0 aperture is a welcome sight on such an inexpensive device, and it helps the E4 Plus capture occasionally satisfying shots with proper depth-of-field.

On the front, the 5-megapixel selfie camera benefits from an LED flash, and the results are just acceptable.

Motorola’s warranty is standard for the industry – it lasts 12 months, and covers production defects, but not accidental drops and water damage. You can guard against those eventualities with Motorola Care Accidental Protection, which runs $70 for 15 months, or $100 for 24 months.

The Moto E4 Plus starts at $180 unlocked. For that price, you get 16GB of internal memory. Spend $200, and Motorola will double that capacity. Verizon is offering the 16GB model for $130, but the device will be locked to its network.

Amazon is selling a Prime Exclusive version for customers of the online retail giant’s subscription service. You can save $40 on either the 16GB or 32GB version, in exchange for lockscreen-filling ads.

The Moto E4 Plus is the best sub-$200 phone on the market, and certainly the longest lasting on a charge.

Possibly, and ironically, it comes from Motorola. Spend $50 more over the base E4 Plus, and you can have the next step up – the G5 Plus. The G5 Plus is better in almost every way, trading the E4 Plus’ Snapdragon 427 processor for a markedly more powerful 625 chipset, 32GB of storage as standard, a full HD screen, and improved camera.

Unfortunately, the G5 Plus misses out on the benefit of a huge battery, opting instead for a 3,000mAh unit. That makes the decision a bit of a toss-up, and which way you lean will ultimately depend on what you demand more from your phone: Battery life or performance.

At the other end of the spectrum is the standard E4, starting at just $130. If you have the extra $50 to burn, get the E4 Plus – it’s worth it for the battery alone, but the slightly better processor and camera are welcome additions as well.

There are even more options out there, and you can read about them in our handy best cheap phones guide.

While Motorola has squeezed as much performance as possible out of the E4 Plus’ measly silicon, we don’t expect the device to last much longer than two years. With how little you’re paying, that could be enough. The company’s track record with issuing Android updates has fallen somewhat astray recently, which also isn’t particularly encouraging.

In terms of physical longevity, we like the metal build, and the water-repellent nano-coating may help in the event of a spilled drink or a little rain. Don’t expect the E4 Plus to survive a swim in the pool – it’s not IP-rated water resistant.

Yes. The Moto E4 Plus is one of the best devices at its price point, offering unparalleled battery life and performance that defies its modest hardware. While the G5 Plus is certainly worthy of consideration, the E4 Plus is more budget-friendly.