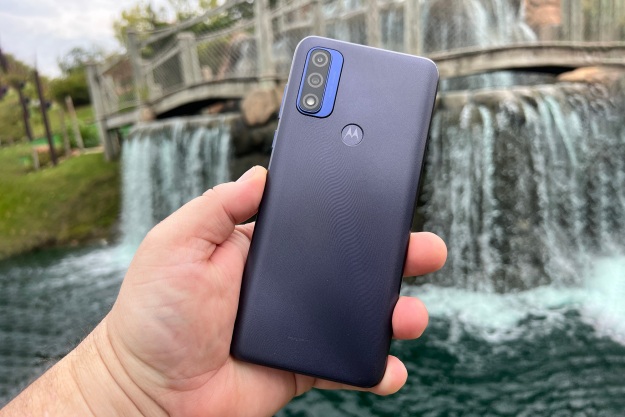 “The Moto G Pure is the cheapest Moto smartphone you can buy. There are huge compromises, but some fun surprises as well.”

The Moto G line of phones is not supposed to be glamorous. They’re the money makers. For every flagship Motorola sells, there are at least a few dozen midrange and budget phones flying off the shelves. That’s why the Moto G series persists when others fail. Unfortunately, the Moto G line has gotten a little confusing of late, with phones like the Moto G Power, Moto G Stylus, and the Moto G100. Now, we get the Moto G Pure, seemingly trying to get back to its budget roots.

The Moto G Pure is an entry-level phone, with compromises all over the place which I discovered as I used the phone on Verizon’s network for seven days. It comes with a somewhat attractive price tag, nice design, and Motorola software which is both a blessing and a curse.

Like most smartphones, the design on the front is quite simple. The 6.5-inch IPS LCD display has a notch at the top for the single front-facing camera and a fairly large chin at the bottom. Around the sides of the phone, there’s a ridged power button and volume rocker on the right. On top is a headphone jack, on the left is the SIM/microSD card tray and on the bottom, you have a speaker grille and USB-C port.

On the back, there’s a nice wavy-lined textured pattern that is nice and grippy and easy to hold. There’s a rear-mounted fingerprint sensor with the Motorola logo in it and a camera bump that holds two camera sensors and a flash. The ridges on the back have a knack for catching the light at different angles and playing across the back of the phone. The phone only comes in one color, which Motorola calls “Deep Indigo.”

As mentioned, the screen is a 6.5-inch 720p IPS LCD panel. It’s fairly unimpressive but it has a 20:9 aspect ratio which makes it easy to use one-handed. Being stuck at such a low resolution is a bit of a bummer though, especially if you want to use that large battery for some media consumption.

Motorola’s software is both a plus and a minus here, but let’s get the minus out of the way right away. This phone ships with Android 11, which wouldn’t be so bad, except that as of October 4th, Google released Android 12 to the public. Motorola promises one operating system upgrade and two years of software updates. Once again, that’s not so bad, except that other OEMs promise as many as three operating system upgrades and four years of security updates. Considering people tend to hold onto their phones for longer than two years, that’s a paltry promise.

But on the flip side, Motorola’s software is also a blessing because it’s very, very good. Motorola offers what amounts to a Pixel-like experience with a minimal launcher and a lot of design cues from Google. Motorola goes further though with a series of gestures like the chop-chop motion to turn on the flashlight. Motorola’s usual wrist-twist to activate the camera is not here for some odd reason, but a new swipe back and forth across the screen gesture gets you into multitasking mode quite easily.

Motorola offers what amounts to a Pixel-like experience with a minimal launcher and a lot of design cues from Google.

These are the kind of things I get very used to when using Motorola phones and dearly miss when I move on to a different OEM. Why the wrist twist isn’t here isn’t clear, but it is missed. The new multitasking gesture would make up for it, but the performance on this phone doesn’t lend itself to single-tasking, let alone multitasking.

Inside the G Pure, there’s a MediaTek Helio G25 processor, 32GB of storage, and 3GB of . Add to that a 4,000mAh battery, and you have pretty typical specifications for a phone in this price range. The phone is missing , wireless charging, and . Of all the specs, the 32GB of storage seems light for this price range, but everything else is on par with what you can expect from the competition.

Overall, this is what you would expect a budget phone to act like. Launching apps can be very slow, launching the camera takes several seconds, and switching between tasks is something of a chore. Gesture navigation is fairly clunky due to the fact that the phone is not very responsive when at rest. I’m not terribly surprised that the performance is what it is, but it’s hard not to be a little disappointed.

This phone virtually sips battery which can be a definite plus.

Perhaps a good way to justify the performance compromise comes in the form of battery life. At 4,000mAh, it isn’t the largest battery you can buy in a phone today, but it’s a very good size and yields good results. I’m more of a light smartphone user, and I used this phone for two days without charging, going to bed on the second day at 19%. This phone virtually sips battery which can be a definite plus.

Moving on to the camera, this phone sports a single 5-megapixel camera in the front and dual cameras on the back. The rear cameras are a 13MP main camera and a 2MP depth-sensing camera. Overall, the camera performance is a pretty mixed bag. During the day, the cameras perform quite well; it’s actually better than most phones at this level. The detail is sharp and clear, with a little loss of focus around the extreme edges of the photo. There are no blown-out highlights, darks aren’t pixelated at all. As long as your subject is not moving, that is.

When you’re trying to photograph a person or animal things fall apart quickly. Auto mode is basically useless on a moving subject, and burst mode isn’t much better. This is true regardless of lighting conditions. It is possible to take a good photo of a moving subject, but it is certainly the exception and not the rule.

At night, the camera is borderline unusable. Photos lack focus and any kind of definition. Highlights are blown out, dark colors are a mess. This is the same for video as well. Speaking of video, day video capture is better but there is zero stabilization in either the main camera or selfie camera. If you’re walking and shooting video, it’s going to be a bumpy ride.

One other high point on the camera comes in the form of a feature called “spot color.” This mode allows you to select a single color in the frame and turn the rest of the photo into black and white. It’s a pretty neat effect and one that I had quite a bit of fun with. My only qualm with the effect is the fact that it requires two hands to use. While holding the phone on your subject, you need to tap on the screen to pick the color you want to keep. Once you do, the camera will show you in real-time what your photo will look like.

None of this is particularly surprising considering the price point of the phone. In fact, the only surprising points are the pleasant surprise in the daytime performance and the spot color effect. Cameras that come on $160 phones are almost entirely dependent on the light you have available and the Moto G Pure is no exception.

The Moto G Pure will hit the market at $160 available for preorder starting October 14. The phone can be purchased from Best Buy, Walmart, B&H Photo, Amazon, and directly from Motorola. Verizon will also carry the phone exclusively until later this year when T-Mobile and Metro are expected to offer it as well.

This phone feels more like a Moto E, except it borrows from the Moto G series with the larger screen, fingerprint sensor, and decent camera. Make no mistake though, this is a budget phone with all the compromises you can expect like laggy performance, slow launching apps, and a camera that only takes good photos in good light. This year is a special one in that it’s almost difficult to buy a bad phone. This is not a bad phone. But it is by no means a good phone either.

But there are some pleasant surprises here, which is about all you can realistically ask for when you’re paying $160 for a . It won’t be a beast, it won’t be a champ. It does take some decent photos and last a really long time between charges. Sometimes that’s good enough.

There is no shortage of smartphones that can be had for under $100, many of them Motorola’s own devices. As I mentioned above, it’s actually hard to find a phone that is bad in 2021, and those sub-$100 phones are no exception. Also noteworthy is the new Nokia G300, which is HMD’s cheapest phone at $199. We haven’t tested it yet, but that’s a compelling price for connectivity.

Motorola has a history of building tough phones and provides the standard one-year warranty, which is good. But Motorola also has a history of poor software support, which is not good. You’ll get 12 on this phone, but that’s it. Security updates will stop after two years in 2023.

No. While this is the cheapest Moto phone you can buy, Motorola and HMD have options that include a larger battery and even connectivity. While the camera is a nice surprise on this phone, it’s not enough to justify the relatively high price tag this phone commands. A few extra dollars will get you even more functionality within the Moto G line, to say nothing of less expensive phones from other OEMs.

Topics
Video-editing app LumaFusion to get a Galaxy Tab S8 launch
The best phones for kids in 2023
Samsung Galaxy S23: release date, specs, price, rumors, and news
This is the OnePlus Pad — the OnePlus tablet we’ve waited years for
The best QR code scanning apps for iPhone and Android in 2023
How to get Apple’s Black History Month 2023 wallpapers for your iPhone and Apple Watch
Yes, we really are completely spoiling the OnePlus 11 and Buds Pro 2 launch
The best rugged smartphones for 2023
The best iPhone games in 2023: 31 games you need to play right now
This Apple leaker just revealed tons of changes for iOS 17 and iPhone 15
Beats Studio 3 headphones are $120 off today at Amazon
How to cheat in Words With Friends
Trading in your iPhone with Apple? You’ll get less than yesterday