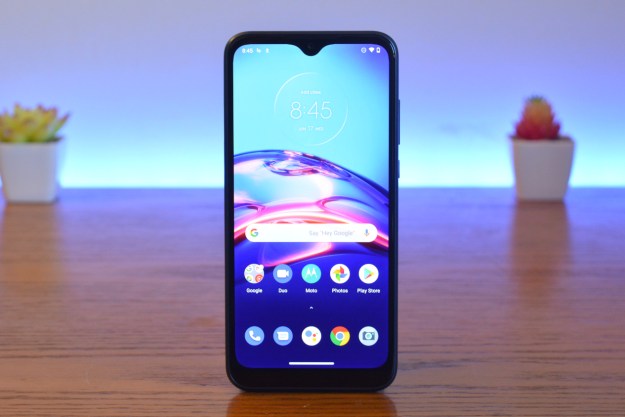 Motorola has long been a go-to company for budget phones. The Moto E was first launched in 2014, and quickly became a fan favorite for those who want a decent phone for around $150. Six years later, the company is continuing the tradition with a new Moto E model that boasts a relatively modern design, midrange specs, and more.

While the Moto E has remained a great option over the years, plenty of competition has popped up. Does the new Moto E still compete with the best phones under $200?

Edge-to-edge displays have made their way to some of the cheapest phones out there — and the Moto E is jumping aboard that train. The device has a small chin at the bottom and a teardrop notch at the top, but it still looks great for a phone in this price range.

The display sits in at 6.2 inches, and the bezels around it are relatively slim. That’s good news — it means that the phone looks modern despite its price range.

Around the edges of the phone, you’ll get a pretty standard setup, including a volume rocker and power button on the right, as well as a SIM/MicroSD card slot, also on the right. There’s also a headphone jack on the top, which is good news for those who still use wired headphones.

On the bottom, you’ll get a Micro-USB port, which is a little frustrating to see. The Moto E may be a budget phone, but it’s 2020, and USB-C should be the standard on all phones by now.

The display on the Moto E is pretty much what you would expect from a $150 phone in 2020. It has a 720p resolution, and it’s an LCD display, so don’t expect much. It also seems to be slightly different than the display on the new Moto G Fast, as it can’t get quite as bright. If you’re outside and in direct sunlight, you may have some issues being able to see the display clearly.

Under the hood, the Moto E offers a Qualcomm Snapdragon 632 processor coupled with 2GB of RAM. I found that while it’s not necessarily able to handle heavy multitasking or intense mobile gaming, it definitely does the job for most day-to-day use, and certainly outperforms a lot of the competition in this price range.

Generally speaking, most users will be more than happy with the performance of this device. If you’re switching between more than a few apps at a time, you may have to deal with slowdowns and skips in the software, but those usually resolved themselves quickly, and the device was still more than usable. The same is true for Chrome tabs — basic web browsing is perfectly fine, but anything heavier and you’ll want to consider a more powerful phone.

Basic mobile gaming is also doable on this phone, but don’t expect much more than the basics. Call of Duty: Mobile was playable, though it wasn’t the smoothest experience out there. The Moto G Fast, or if possible, the Moto G Power, will perform better.

If you’re really serious about mobile gaming, you’re going to want a phone with at least a Snapdragon 7xx-series SoC, or an iPhone. Budget phones are outmatched. This isn’t necessarily a problem unique to the Moto E, but rather a compromise all budget phones make to reach a lower price point.

The battery capacity on the phone comes in at 3,550mAh, and we found that in day-to-day use, it performed fine. The battery should get you through a day of normal use, but heavy users may find that they have to charge the device before the end of the day. Don’t expect it to get too far into the next day. The phone does not offer wireless charging, nor does it have fast charging, so you’ll need to get into the routine of charging it at night, or if you work at a desk, when you’re working.

The 2020 Moto E offers a dual-sensor camera, though one of those sensors is a 2-megapixel lens only used to capture depth information. The other sensor is a 13-megapixel lens with an f/2.0 aperture and, generally speaking, it’s fine. But only fine.

In well-lit environments, the Moto E is able to capture decent photos, with solid color reproduction and depth of field.  While photos weren’t incredibly detailed, that won’t be such a big deal for most uses.

Of course, you won’t always be in well-lit environments. When you’re not, you’re more or less out of luck. While more expensive phones are capturing better and better low-light photos, there’s no night mode to speak of on this phone — as a result, badly lit photos either look noisy, or you can’t see the subject at all.

Around the front, there’s a 5-megapixel selfie camera, and it does the job in a pinch. Like the rear-facing camera, it doesn’t perform in low light, and it’s definitely susceptible to unnaturally bright colors in some situations. Still, it’s usable for most social media posts.

The Moto E is a budget phone, and it has a budget camera. It’ll do the job in most situations, but don’t expect incredible photos, and don’t expect to be able to use it in low light.

The software experience on modern Motorola phones is great. With the Moto G Fast and Moto E, the company has rebranded its Android skin as My UX. Apart from a name change, not much else is different — you’ll still get the nea- stock experience with only a few minor tweaks that honestly make the experience even better.

Perhaps the best thing about My UX compared to stock Android are the Moto Actions, which allow you to control certain aspects of the phone’s software with gestures. For example, you can take a screenshot with the tap of three fingers, or you can turn the flashlight on with a chopping motion. It’s a nice touch.

My UX is built on Android 10, and Motorola has been pretty good about delivering software updates. That said, considering this is a budget phone, it may not get updates as quickly as you might want. The , for example, didn’t receive Android 10 until May 2020.

The Moto E comes with a one-year limited warranty, but that warranty really only covers manufacturer defects. It’s worth buying a case to protect the device

The Motorola Moto E is far from perfect, but for $150, it’s best option. It offers a relatively modern design, solid performance, and more, and if you’re buying on a budget, performance is one of the most important things to consider.

If you’re willing to spend more money, then there are definitely better options. The $200 Moto G Fast is a solid phone, with better performance and much better battery life. If you can double your budget to $300, the Samsung Galaxy A51 or the Google Pixel 3a are worth considering. The in particular is an excellent phone with an incredible camera.

Under light use, the Moto E should last around two years. The phone’s performance will degrade over time, so don’t expect to have a smooth experience for that entire two-year period. Also, the phone has no water-resistance, so don’t take it near the bath or the pool.

Yes, if you need a phone for $150 or less. If you can stretch your budget a little, it’s worth spending the extra cash.

Topics
Video-editing app LumaFusion to get a Galaxy Tab S8 launch
The Galaxy Z Flip 5 might fix the Flip 4’s biggest design flaws
The best Android apps for December 2022
The best voice-changing apps for Android and iOS
OnePlus’ new Android update policy matches Samsung, shames Google
Fitbit Cyber Monday Deals: Save on Sense 2, Charge 5, and Versa 2
Apple Cyber Monday Deals: Apple Watch, AirPods, iPad, MacBook
Get these JBL earbuds and 4 months of Music Unlimited for $25
How Apple can fix iOS 16’s messy lock screen customization in iOS 17
Spotify Wrapped 2022: what it is and how to view it
Save $225 on the unlocked Samsung Galaxy S22 Ultra with this deal
Samsung Galaxy Z Fold 4 is $350 off — no trade-in needed
The best Samsung Galaxy Watch faces for style and utility