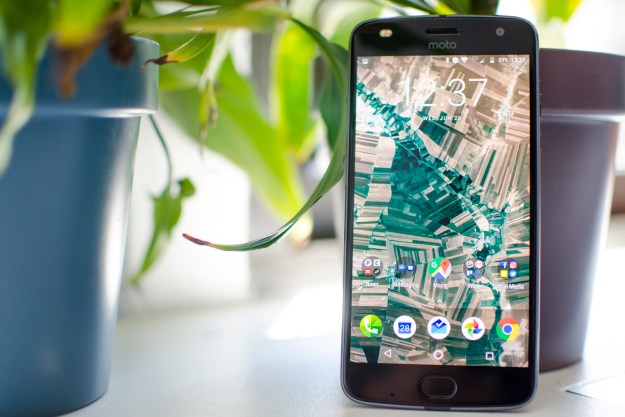 Motorola’s sleeper hit last year wasn’t the well-advertised Moto Z Force, but the Moto Z Play: A sub-$450 smartphone with solid performance and excellent battery life. This year’s successor, the Moto Z2 Play, hits the same strong notes with some internal upgrades, but at a slightly higher price. Is it worth it? Find out in our Moto Z2 Play review.

The original Moto Z Play looked industrial, and the largely unchanged design of the Moto Z2 Play keeps that aesthetic. It takes a step backward, though,  with a two-tone rear that makes it seem as though there’s too much going on. The sleek, black color also disappears in favor of gray and gold options — we’re not fans (blue and black are available in certain markets).

Button placements remain the same, with the volume rocker on the right edge, above the power button. Unlike the flagship Moto Z series, the Z2 and the Z Play retain the headphone jack on the bottom, next to the USB Type-C charging port. On the front, the only difference from last year’s Moto Z Play is the front flash and the fingerprint sensor, which looks more oval than square.

The 5.5-inch AMOLED screen has a 1,920 × 1,080 pixel resolution, and it looks great. Colors are vibrant and fairly accurate, and the screen looks sharp. Sure, there’s a lot of unused space around the display, but one of the first things you’ll notice about the Moto Z2 Play is how it’s so thin and light. Motorola has shaved off 1.01mm from the predecessor, making it impressively thin at just 5.99mm. That has also cut down on weight by 20 grams. Sadly, you’re still stuck with a massive camera bump on the rear — the phone won’t sit flat on a surface.

Fortunately, since the Moto Z2 Play still supports Motorola’s Moto Mods, you can magnetically snap a case or cover on the back to mask the rear design and make the camera flush. All of Motorola’s “Z” devices are modular — there’s a 16-pin connector on the back, and you magnetically snap “Moto Mods” to add features. There’s the JBL Soundboost mod, which basically adds a large speaker to your phone; the Hasselblad camera mod, which turns the phone into a point-and-shoot; or you can go for simpler mods like stylistic covers, or battery packs.

We think Motorola’s modular system is great, and it’s an incredibly user-friendly experience. The mods that were released last year worked almost flawlessly, though the covers sometimes have a slightly visible gap. Our main problem with the Mods? They’re too expensive. The JBL SoundBoost is $80, the Incipio Power Pack starts at $64, the Incipio vehicle dock is $65, the Mophie juice pack is $80, and the Hasselblad mod and the projector are both $300 each. The ecosystem is pricey.

We still really like using the phone without a mod because it’s so delightfully thin, but we’re glad Motorola is going strong with development of these Moto Mods.

The Moto Z2 Play crushes everyday tasks like email, messaging, web browsing, and social media. It’s thanks to Qualcomm’s Snapdragon 626 processor, but the 3GB of RAM certainly helps. We didn’t encounter any issues while running through apps, navigating through the home screen and settings, or even when we used the split-screen mode to multitask between two apps.

Performance wasn’t flawless, however. While most games such as Breakneck and Sup performed without a hitch, we did see some performance dips in some graphics-intensive games like Batman — The Telltale Series. Here are some benchmark scores our Moto Z2 Play review unit received:

The lack of visual modifications to Android 7.1.1 Nougat likely improves performance — the software experience is very similar to stock Android, or the experience you’ll find on the Google Pixel. The minor differences are mostly improvements, like Moto Actions. These give you gesture shortcuts like starting the camera with a double twist; or chopping the phone in air twice to trigger the flash quickly. You can also make the phone stop ringing when you pick it up, or turn on “One Button Nav” to use the fingerprint sensor as your main navigation, instead of the on-screen Android icons.

One of the first things you’ll notice about the Moto Z2 Play is how it’s so thin and light.

Moto Display offers an ambient lock screen that fades in notifications to save power, and it can also remove harmful blue light  from your phone before bedtime.

One of our favorite features is Moto Voice — it’s been around for some time, but the voice assistant is a little more targeted in what it can do. It’s like what Samsung’s trying to do with Bixby, but on a smaller scale. There’s no need for a traditional trigger word, like “OK Google,” so you can just say, “Show me Chrome,” and the Chrome icon will pop up at the top of the screen. Swipe it down, and the app will open. This works with any app installed on your phone, and you can also say a few other phrases like, “Show me my calendar,” and “show me the weather.” It may not work if you’re in a somewhat noisy environment, but it can be super helpful if you’re driving. It also said the phrase was secure and tied to my voice, but a coworker was able to trigger it by simply mimicking my voice.

There’s also a Verizon app called AppFlash that opens when you swipe right on the home screen — it’s essentially mimicking Google Now, and thankfully you can turn it off for Google’s solution instead. Google Assistant is also present, allowing you to control your supported smart home devices, and more.

The software experience is great on the Moto Z2 Play. If you’re an avid gamer, you may want to opt for a more powerful device like the OnePlus 5.

In broad daylight, the Moto Z2 Play takes great photographs with its 12-megapixel rear camera. As you can see in some of the photos we took, images are detailed and have accurate colors. There’s even a well-designed Pro mode, in case you want to have more control over the camera.

We did notice some slight shutter lag, so occasionally — even in broad daylight — the camera did take a blurry shot when we moved a little. There’s no optical image stabilization to mitigate this, so just keep in mind you’ll want to be very still when taking photos. This is worse in low-light situations, as a lot of photos end up slightly blurry. If they’re not blurry, there’s plenty of noise. It’s certainly a capable camera, but it may not always be reliable.

The front-facing 5-megapixel camera is standard, and there’s a flash to help all you selfie-lovers. There’s also a beautification mode here, which removes blemishes on your face.

One of the best features of the original Moto Z Play is its battery life — it gave us nearly two full days of use. While the Moto Z2 Play’s battery is certainly better than most smartphones on the market, it’s sadly not as good as its predecessor. It’s easy to see why — Motorola made the decision to go for a thinner phone, while cutting the battery capacity from 3,510mAh to 3,000mAh. We would have preferred a longer-lasting battery over thinness.

But again, that’s not to say the Moto Z2 Play doesn’t endure. It will most definitely give you more than a full day of use, and at least two days with light usage. With heavy usage, we began the day with a full charge, and by 6 p.m. it was around 45 percent.

Motorola offers a standard one-year limited warranty from the date of purchase. It covers defects from the manufacturing process, but you won’t be covered for any damage from accidental drops, or dips in water.

Only the Verizon model of the Moto Z2 Play is available now from both Verizon and Motorola’s websites. It will be in Verizon stores starting July 6, and it costs $17 per month for 24 months, or you can buy the phone outright without a payment plan for $408. Early buyers will get a JBL Soundboost 2 speaker for free, which would otherwise cost $80. On another carrier? Don’t worry — Motorola said the Z2 Play will also be available unlocked from its website later this summer, though at a higher price of $500.

The Moto Z2 Play’s strong points are excellent battery life and fun mods you can use to enhance your smartphone. It’s the phone to get if you’re on Verizon, but Motorola may be asking a little too much with a $500 price tag for the unlocked version.

Yes. The OnePlus 5 is a no-brainer as it offers superior performance, a better camera, and an equal if not better software experience — all for the comparable price of $480. The only issue is it’s only compatible with GSM networks, so it won’t work on Verizon or Sprint’s network.

There’s also last year’s ZTE Axon 7, which you can get for less than the original $400 asking price. It’s likely still more powerful since it uses the Snapdragon 820 processor, but what the Moto Z2 Play has on these phones is far better battery life.

Motorola supports its devices for two years or less, sadly. Expect an update to the next Android version, but we can’t say for sure if it will get Android P. The company has also not fully committed to issuing monthly security updates for all of its devices, so you should be wary. The current security update is from May 1.

The Moto Z2 Play is susceptible to water damage, but thankfully there’s no glass on the rear, so it’s less fragile than phones like the Galaxy S8. Still, we’d recommend getting a case.

Yes. If you’re on the Verizon network, or if battery life is the most important aspect of a smartphone for you, the Moto Z2 Play is a good buy — even more so if you like some of the Moto Mods. If you’re on a GSM network, though, we strongly recommend going for the OnePlus 5.

Topics
Video-editing app LumaFusion to get a Galaxy Tab S8 launch
The best walkie-talkie apps for Android and iOS
Snapdragon 8 Gen 2 is here, defining the next generation of premium smartphones
Why the Google Pixel Fold actually scares the hell out of me
Motorola’s newest smartwatch isn’t at all what you’d expect
Even the Apple AirTag is discounted for Cyber Monday 2022
Time is running out to save $100 on the Pixel 7 for Cyber Monday
Samsung Galaxy Z Fold 4, Z Flip 4 get big Cyber Monday discounts
Why a Kindle Paperwhite is the best $100 you can spend on Cyber Monday
When is my phone getting Android 13? Google, Samsung, OnePlus, and more
This Amazfit fitness tracker is $35 for Cyber Monday, and it’s selling fast
This 10-inch Lenovo tablet is $129 for Cyber Monday (selling fast)
Save $200 on the Samsung Galaxy Tab S7+ with S Pen for Cyber Monday